Kia, Hyundai automakers to testify before Congress on car fires after I-Team investigation

The CEOs of Kia and Hyundai are being called to sit in the congressional hot seat next month and explain why hundreds of their vehicles have spontaneously burst into flames.

The CEOs of Kia and Hyundai are being called to sit in the congressional hot seat next month and explain why hundreds of their vehicles have spontaneously burst into flames.

The call for the automakers to testify on Capitol Hill comes six months after Consumer Investigator Jackie Callaway first reported on the unexplained car fires.

Since April, the ABC Action News I-team has exposed hundreds of Kia and Hyundai models manufactured since 2011 that caught fire across the country. 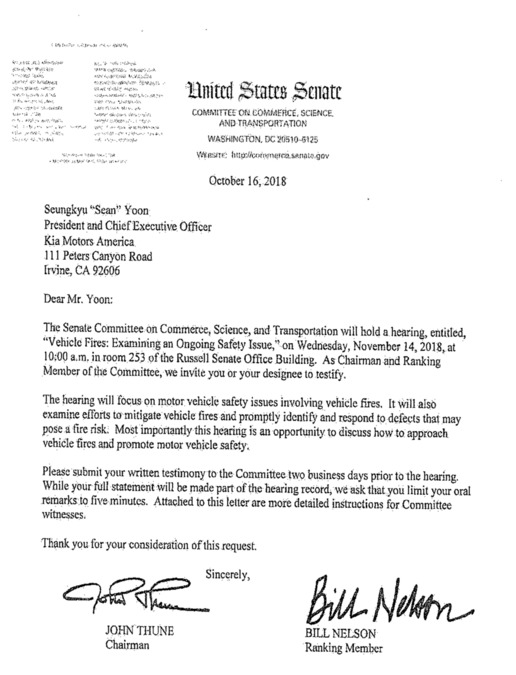 </p><p>The CEOs are also being asked to “promptly identify and respond to defects that may pose a fire risk” at the Nov. 14 hearing in front of the Senate Committee on Commerce, Science and Transportation.

Last month, an Ohio mother spoke out and called for a federal investigation after watching her son burn alive in her 2014 Kia Soul parked at her apartment complex just outside of Cincinnati last year.

“I would not wish that on anybody,” she said.

Carol raced toward the burning car but could not get close enough to help her firstborn.

“It was so hot, I couldn’t get him out of the car without probably killing myself.”

In three separate cases –  including two in Tampa Bay – drivers told the ABC Action News I-team they were trapped, fighting with doors that would not open as flames raced from the engine toward them.

In all, 91 of the more than 200 Kia fires reported to the National Highway Transportation Safety Administration involve the 2011 to 2014 Optimas and Sorentos, according to the National Center for Auto Safety, an industry watchdog.

By comparison, Toyota and Honda drivers in similar-sized SUVs and sedans reported a combined 13 fires for cars sold during that same time period.

The Washington D.C.-based Center for Auto Safety first petitioned federal regulators to launch a safety defect investigation after an ABC Action News story on the car fires aired in May. The Kia that Keith Nash died in is one of more than two dozen reported fires in Kia Souls sold between 2010 and 2015.

The Center for Auto Safety reported last week that 103 fire complaints had been filed with National Highway Traffic Safety Administration since June 12 – an 85 percent increase, according to the congressional hearing announcement.

ABC Action News reached out to Kia for comment. A spokesperson said the company is reviewing details of the congressional request.