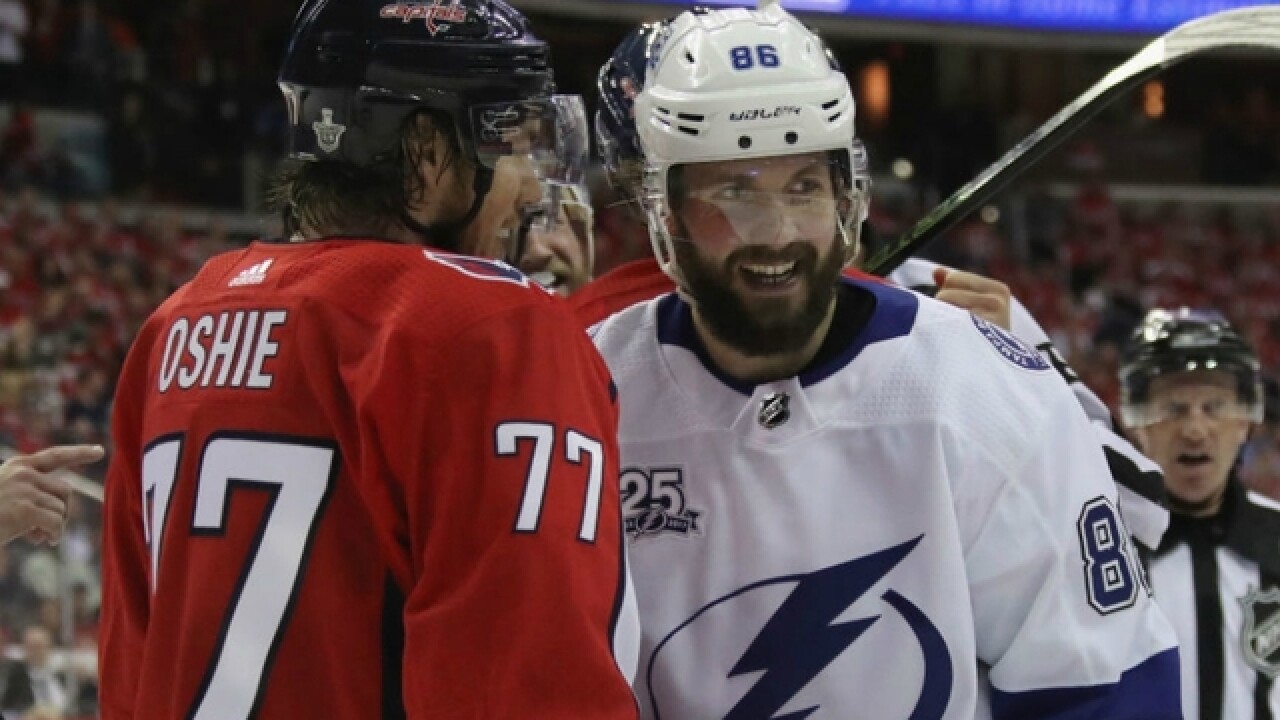 Image copyright 2018 Getty Images. All rights reserved. This material may not be published, broadcast, rewritten, or redistributed.
Bruce Bennett/Getty Images
<p>WASHINGTON, DC: T.J. Oshie of the Washington Capitals talks with Nikita Kucherov of the Tampa Bay Lightning during the third period in Game Three of the Eastern Conference Finals during the 2018 NHL Stanley Cup Playoffs at Capital One Arena on May 15, 2018 in Washington, DC.</p> 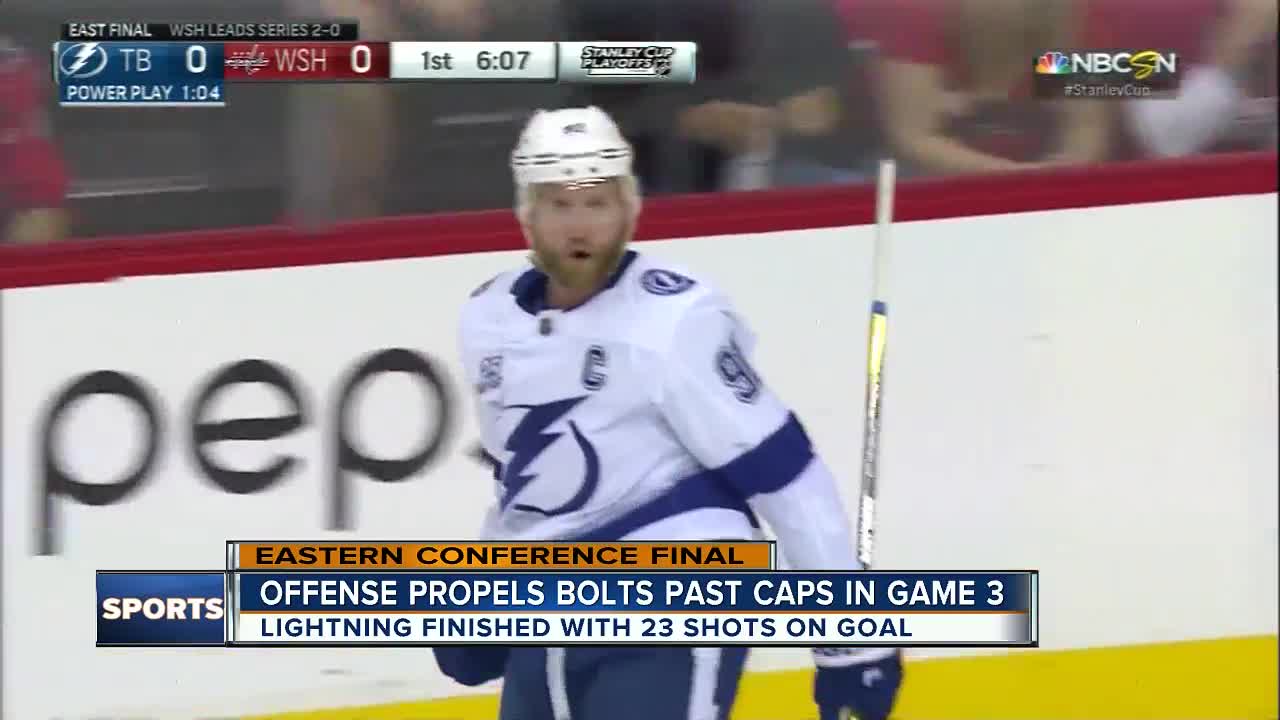 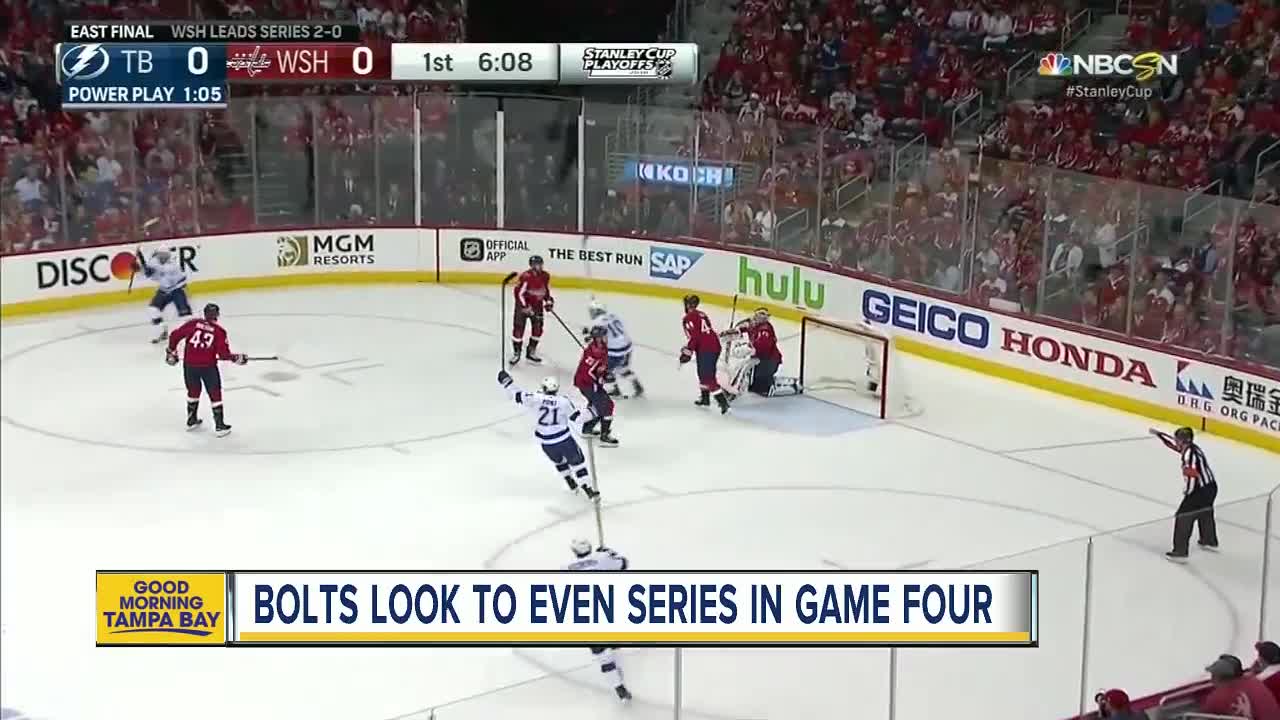 WASHINGTON (AP) -- The good news for Alex Ovechkin and the Washington Capitals is they still lead their Eastern Conference final against the Tampa Bay Lightning. The bad news for the Capitals, counterintuitive as it may be: They host Game 4.

So far, Washington is 7-1 in away games this postseason, closing out each of its first two series on the road.

Heading into Thursday night, the Capitals are only 3-4 in their arena. The latest setback was a 4-2 loss to the Lightning on Tuesday, after victories at Tampa Bay by a combined score of 10-4 in the final's opening two games.

Ovechkin simply shrugged when asked about that discrepancy.

"We don't think about it," the three-time NHL MVP said. "We just play our game."

Others were less dismissive.

"We can take a few things that we've done on the road and put it into our home game," goalie Braden Holtby said. "Just a little simpler. Simpler play. Just a kind of, like, more gritty style."

Asked what his club could do to fare better at home, Capitals coach Barry Trotz said: "Just play the way we do on the road. We're invested there. We're playing with real good focus. I didn't think we were as focused as we have been normally on the road. So just pretend you're on the road. All the buildings are pretty well the same these days."

Trotz notices a difference in his players' attitude on home ice, saying: "It's `us against the world' when were on the road."

There is a league-wide trend here: Road teams are 38-34 in these playoffs.

So much for any supposed home-ice advantage, right?

"For whatever reason, at this time of the year there are more distractions than in the regular season, for sure. A lot of people have friends and family coming down and ticket requests. Sometimes there's that little added pressure of playing at home and wanting to obviously do good things in front of your fans," Lightning forward Steven Stamkos said. "There's something to be said, too, (for) winning games on the road, when you can just kind of hear a pin drop in the crowd, sometimes, which is always a good thing."

"It's easier to play on the road. It's always that way on the road. Any team would say that," he said. "Because you're not focused on the excitement of your fans and all that. They bring you energy in good ways, but at the same time, you need to stay realistic and play your game."

During the regular season, Washington was a strong home team, playing in front of loud, red-wearing sellout crowds in every game.

Only five teams in the 31-club NHL had more victories at home than Washington's 28 -- and that total represents seven more wins than the Capitals managed on the road.

So what is going on in the playoffs?

"I don't really have an explanation for it, to be honest with you," defenseman Brooks Orpik said. "I know when we go on the road, I think maybe we feel a bit more relaxed, and when we do make mistakes, maybe we don't let the groaning affect us or whatnot. I mean, that being said, I think we should be probably mentally stronger to not let that affect us. Just got to try to find a way to win the next one at home, for sure."

NOTES: Injured Capitals C Nicklas Backstrom, who has missed the last four games with an injured right hand, took part in the team's optional skate Wednesday. But Trotz wouldn't give any hint as to when Backstrom might return. "When Nicky's ready to go, he's ready to go," Trotz said. "You miss him in every way shape or form." ... Washington re-signed D Aaron Ness to a one-year, two-way contract worth $650,000 if he's in the NHL, $425,000 in the minors. Ness had one assist in eight games for the Capitals this season.