Point, Kucherov score 2 goals each in Bolts' thrilling 5-4 victory over Panthers in Game 1

SUNRISE, Fla.- (AP) — If there's one thing that was made clear in Sunday night's Game 1 featuring the Tampa Bay Lightning and Florida Panthers, it's that these two teams absolutely hate each other.

The Bolts triumphed over their in-state rivals in a 5-4 thriller where the game-winner was scored by Brayden Point with just 1:14 left in the third period: his second goal of the game.

Nikita Kucherov, playing in his first game of the entire season, picked up right where he left off, scoring two goals of his own. 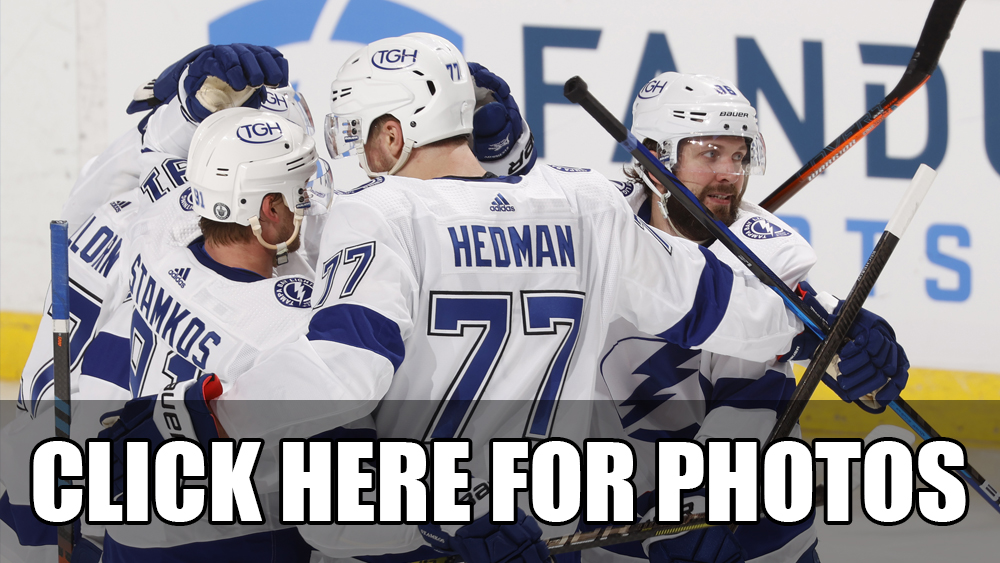 For the Tampa Bay Lightning, the return of several key players couldn’t have come at a more opportune time.

“I was excited to get back in a game. I’ve waited for this for a long time,” Kucherov said.

Fan-favorite Steven Stamkos also returned to the ice for the first time in several weeks.

But it was a hard-fought game, with extracurricular pushing and shoving and trash talk going on after nearly every stoppage in play.

The lead switched hands four times throughout the game as momentum continued to shift back and forth.

Blake Coleman scored a short-handed goal as the first goal of the game. Andrei Vasilevskiy made 35 saves and Victor Hedman, who also returned after missing the last two games, had three assists.

Jonathan Huberdeau had a goal and two assists, Owen Tippitt and Aleksander Barkov each had a goal and an assist and Carter Verhaeghe scored a goal against his former team to lead the Panthers. Sergei Bobrovsky stopped 34 shots, and Keith Yandle and Sam Bennett each had two assists.

“Two exceptional hockey teams going at it.” Lightning coach Jon Cooper said. “A win is a win. Whether you blow a team out or win by one goal or you come back to do it. You just want to win. I was proud of the guys. We had a one-goal lead and coughed it up. There was no panic on the bench.”

Point tied it at 4 with seven minutes to go on his power-play goal and then got the winner when he skated in on a breakaway and backhanded the puck past Bobrovsky.

“I knew I might have some space, made a move and it went it,” Point said.

The Panthers had won their last six games of the regular season, including the final two against the Lightning before the return of several of their top players.

“They have good offense and a good team,” Bobrovsky said. “We have a good team, we have to forget this one and keep competing. We did some great things offensively. We have to put this behind us and move on.”

With the Panthers trailing 3-2, Huberdeau skated in on a breakaway and slid the puck under Vasilevskiy’s pads at 1:27 into the third to tie the score at 3.

“Very intense game. There was a lot going on out there,” Florida coach Joel Quenneville said. “Their power play was the difference tonight.”

The Panthers thought they scored a power-play goal when Sam Bennett pushed the puck past Vasilevskiy at 7:26 of the first, but the goal was waved off due to goalie interference. The Lightning took a 1-0 lead on Coleman’s short-handed goal 16 seconds later.

The Panthers tied it at 1 on Barkov’s power-play goal at 9:41, and Verhaeghe put them ahead with 3:29 left in the first, which sent the crowd of over 9,000 into a towel-waving frenzy.

“I got goosebumps before the game,” Barkov said. “You want this to happen every game. We want to keep going, having fun.”

Kucherov tied the score 2-all on his first power-play goal at 4:48 of the second. His second gave the Lightning a 3-2 lead when he one-timed a pass from Hedman from the right circle with 5:09 left in the second.

Since his NHL debut in 2013-14, Kucherov has scored 38 postseason goals, tying him with Alex Ovechkin for most among all players.

Additonally, Coleman’s short-handed goal was the first in the playoffs for the Lightning since Alex Killorn in Game 1, Round 1 in the 2019 playoffs.

The Panthers increased capacity to 50% for the playoffs. 9,646 attended Sunday’s game.

Game 2 will be Tuesday night at 8 p.m. from Sunrise.