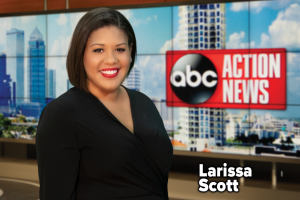 Larissa Scott is a journalist who is passionate about truthful and in-depth storytelling.

Prior to joining the Good Morning Tampa Bay team as a reporter, Larissa was a reporter at WVTM13 in Birmingham, Alabama. There she reported on major events including the deadly Lee County tornado that killed 23 people, to getting exclusive political interviews about the Roy Moore sexual assault allegations. She consistently broke stories by cultivating contacts in the community.

Before that, Larissa worked as a reporter in both Panama City, Florida and Gainesville, Florida.

Larissa graduated from the University of Florida and is proud to call Florida her home.

Larissa has a passion for breaking barriers and pushing past stereotypes to humanize her stories when she's reporting on anything from politics, national events, crime, social reform, and the environment.

She began her career in journalism in radio as a reporter for Florida's 89.1 WUFT-FM in Gainesville, Florida.

Larissa is originally from Germany, but her family is now living in Jacksonville, Florida. When she's not working, she's binge watching shows on Netflix, traveling, cooking, or playing with her two dogs.

Have a story idea? Feel free to send her an email or connect on social media.