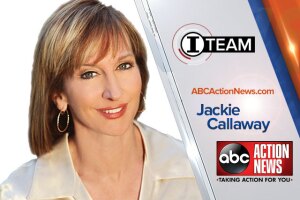 Jackie Callaway is an award-winning investigative reporter for WFTS-ABC Action News in Tampa, Florida whose reporting gives a voice to the voiceless, holds the powerful accountable and defends the most vulnerable among us.

In 2004, she launched the station’s first-ever Taking Action For You campaign, which would develop into a widely recognized station brand known for community service throughout the Tampa Bay area.

She was the first to break the story on thousands of spontaneous fires in Kia and Hyundai vehicles. She dug into what was causing these fires — an investigation that gained national attention and led automakers to recall over 1 million vehicles.

Jackie Callaway’s daily reports make a difference in the lives of those she covers and often pave the way for change.

Among her list of achievements are a Regional Edward R. Murrow Award and four Regional Emmys.

Jackie started her broadcast career at the University of Central Florida, where she earned a BA in Communications with a minor in Political Science. For the last 20 plus years, she’s worked at TV stations in Gainesville, Orlando and Tampa.

If you are dealing with a stubborn consumer issue email Jackie Callaway at jcallaway@abcactionnews.com.