HILLSBOROUGH COUNTY, Fla — Crews from Hillsborough County Fire Rescue are happy to be home after they spent several days in the Carolinas protecting patients with special needs during Hurricane Florence.

They hit the road last Tuesday and were given their task after they arrived Wednesday.

"We did go through quite a bit,” said Gina Remacci, with Hillsborough County Fire Rescue.

They bused them through the hurricane where they dodged flooded waters, downed trees, high wind and snapped power lines.

"For us, it’s not an option to turn back so we have to find alternate routes to get these people to safety and keep ourselves safe,” said Remacci.

They ended up at a state mental facility built in the 1880’s that's been abandoned for 3 years. It was turned into a makeshift hospital for shelter. They say some patients were scared but relieved they were safe from the storm.

"They were very happy to see us. When we got there they felt a little better because they knew they were moving to a better situation,” said Darryl Turmel.

But because the building had been abandoned, there were some unnerving moments.

"There were some live critters in there with us,” said Vallejo.  "Some bats and things of that nature. They did quarantine them off they were in around any of the patients."

Even as flooded waters came closer to their building, crews took this picture of an abandoned truck almost underwater. 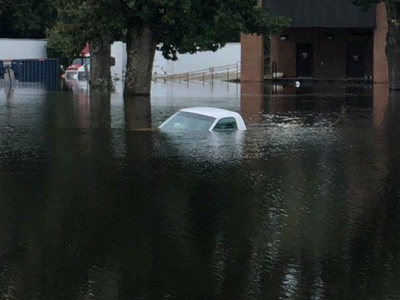 A few nights later, they checked on the flooding and snapped pictures of that same truck. After reviewing the photos, they noticed a strange figure in the driver's seat. 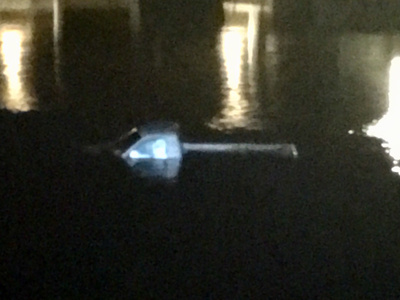 "When they came back and started looking into the picture there’s a green aura or outline of a man with a hat, his hand on the wheel,” said Prudencio Vallejo, with Hillsborough County Fire Rescue.  “Going to bed that night was a little, was exciting,” he said sarcastically.

A much-needed excitement during a very stressful situation.

They say responding to this disaster was an eye-opening experience. The team says the camaraderie during the storm was unrivaled and are thankful they were given the opportunity to protect people.

"We hope in some small way we were able to help them,” said Vallejo.