Travel trailer removed from I-275 overpass in St. Pete after crash

ST. PETERSBURG, Fla — St. Petersburg Fire Rescue has removed a camper that was dangling over an I-275 overpass after a crash on Thursday.

The camper was pushed over the guard rail on the northbound lanes in the area of 5th Ave. S. 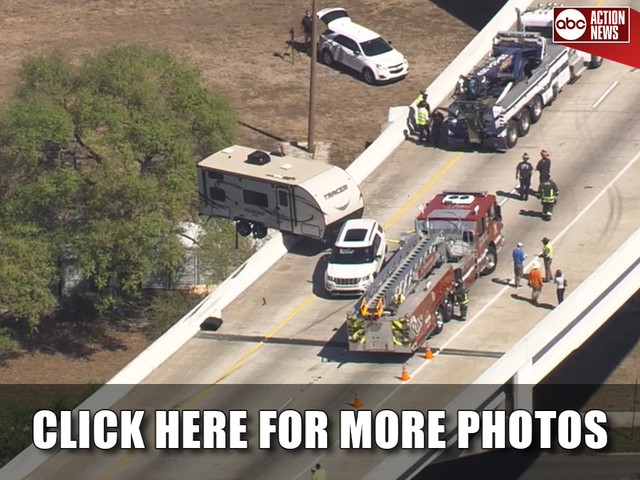 Initial reports indicate a family was on the way to Walt Disney World when their trailer was rear-ended by another vehicle. The camper, being pulled by a Ford Explorer got pushed over the overpass and dangled over the edge.

A tow truck responded to remove the trailer. The trailer was removed at approximately 12:40 p.m..

No one was hurt in the accident.

I-275 will be delayed northbound and 5th Ave S underneath is closed between 16th St and 20th st pic.twitter.com/FRQnIuN2I3

Motor vehicle crash on I-275 northbound over pass. 3 vehicles involved with no injuries. A camper is hanging precariously over the guard rail. @StPetePD @FHP pic.twitter.com/WALxU5XhXu