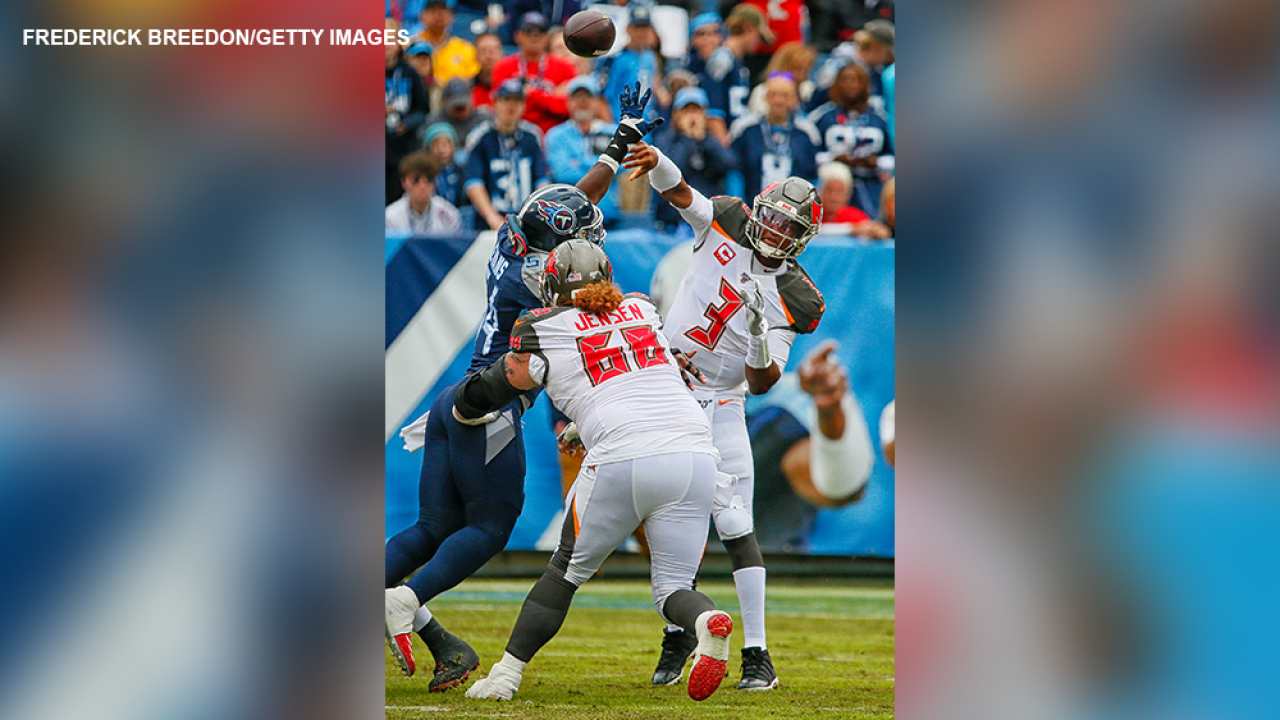 Jameis Winston #3 of the Tampa Bay Buccaneers throws a pass against the Tennessee Titans during the first half at Nissan Stadium on October 27, 2019 in Nashville, Tennessee. (Photo by Frederick Breedon/Getty Images)

NASHVILLE, Tenn. (AP) — The Tennessee Titans are very happy their stingy defense came up with four turnovers and another late-game stop.

The Tampa Bay Buccaneers leave town ticked off over an inadvertent whistle that cost them a fumble return after stopping Tennessee's fake punt in the final minutes.

Ryan Tannehill threw an 8-yard touchdown pass to A.J. Brown with 6:55 left, and the Tennessee Titans rallied to beat the Tampa Bay Buccaneers 27-23 Sunday for their second straight win.

"Without that, it'd obviously be a different story," Titans coach Mike Vrabel said of the turnovers.

Tampa Bay coach Bruce Arians was upset with losing a TD with 3:41 left after linebacker Devin White stopped Brett Kern short on a fake punt, knocking the ball out. Andrew Adams grabbed the ball and ran toward the end zone only to be whistled dead. He also defended Jameis Winston with four turnovers.

"To have a fumble, pick it up and run it for a touchdown and an inadvertent whistle, that's tough," Arians said. "Everybody's going to want to say, "OK Jameis threw interceptions. Jameis didn't throw one damn interception that was his fault. His receivers let him down today. Guys stopped on routes they were supposed to be going down the middle. He played his tail off."

Kern wasn't sure if he lost the ball.

"The Red Sea closed up pretty darn quick," Kern said. "That guy made a great play."

Referee Adrian Hill told a pool reporter Kern was ruled down by contact, which is why the whistle was blown. Officials saw the ball come out after the whistle blew with the only reviewable part of the play if the runner was down by contact. Even if reviewed, Hill said the Bucs only could've been given the ball at the spot where Adams recovered.

Tennessee came in with the NFL's No. 4 scoring defense, having not allowed more than 20 points in a game all season. The Buccaneers entered with the league's fourth-best offense, averaging 28.8 points a game, and they became the first to top the mark.

The Titans (4-4) led 14-3 after turning a pair of first-quarter turnovers into two TD passes by Tannehill.

The Bucs (2-6) lost their third straight and fourth in five games despite Winston and Mike Evans putting the Bucs up 23-17 by connecting on a TD pass at the end of the first half and a second in the third quarter. They wouldn't score again despite outgaining Tennessee 389-246.

Tampa Bay couldn't overcome the turnovers — all by Winston, who now has 10 combined turnovers over his past eight quarters. The Bucs also were held to three field goals in the first half, twice when inside the Tennessee 5.

After Harold Landry III sacked and stripped Winston of the ball with 6:03 left, the Titans had a chance to pad their lead when Vrabel went for the fake field goal.

The Bucs drove to the Titans 32 and had the 2-minute warning to think over a play for fourth-and-1. Winston handed off to Peyton Barber out of the shotgun, and Jurrell Casey and Jayon Brown stopped him short. Casey said he heard the protection call and knew the Bucs would run.

"My whole objective was to get lower than him, shoot off the ball ... make sure I win that battle," said Casey, who recovered a fumble at the goal line to preserve a 23-20 win over the Chargers a week ago.

Tampa Bay had a final chance, getting the ball back with 42 seconds to go, but Logan Ryan intercepted Winston with 18 seconds left to seal the win.

Jason Pierre-Paul sacked Tannehill on his first snap in his first game after being activated from a neck injury suffered in an offseason car accident, and Shaq Barrett got his 10th sack of the season. The Bucs finished with three sacks.

Titans rookie defensive lineman Isaiah Mack recovered a quick shotgun snap to Winston to set up Tannehill's 5-yard TD pass to Jonnu Smith, and Malcolm Butler caught Winston's overthrown pass to Chris Godwin and ran to the Titans 10. Tannehill made it 14-3 with a 6-yard TD pass to Tajae Sharpe.

Winston finished with 301 yards passing, while Evans had 11 catches for 198 yards. Arians was asked about the Bucs' offense seeming to be on different pages, and he made clear where he wants improvement. "It's the receivers, not the quarterback," Arians said. "The receivers totally screwed it up."

Winston said the Bucs had the game in the bag.

Titans left guard Rodger Saffold went down on a pass play in the first quarter and went to the locker room to be evaluated for a concussion. He did not return and Jamil Douglas replaced him. Three-time Pro Bowl left tackle Taylor Lewan went to the sideline with 1:42 left.