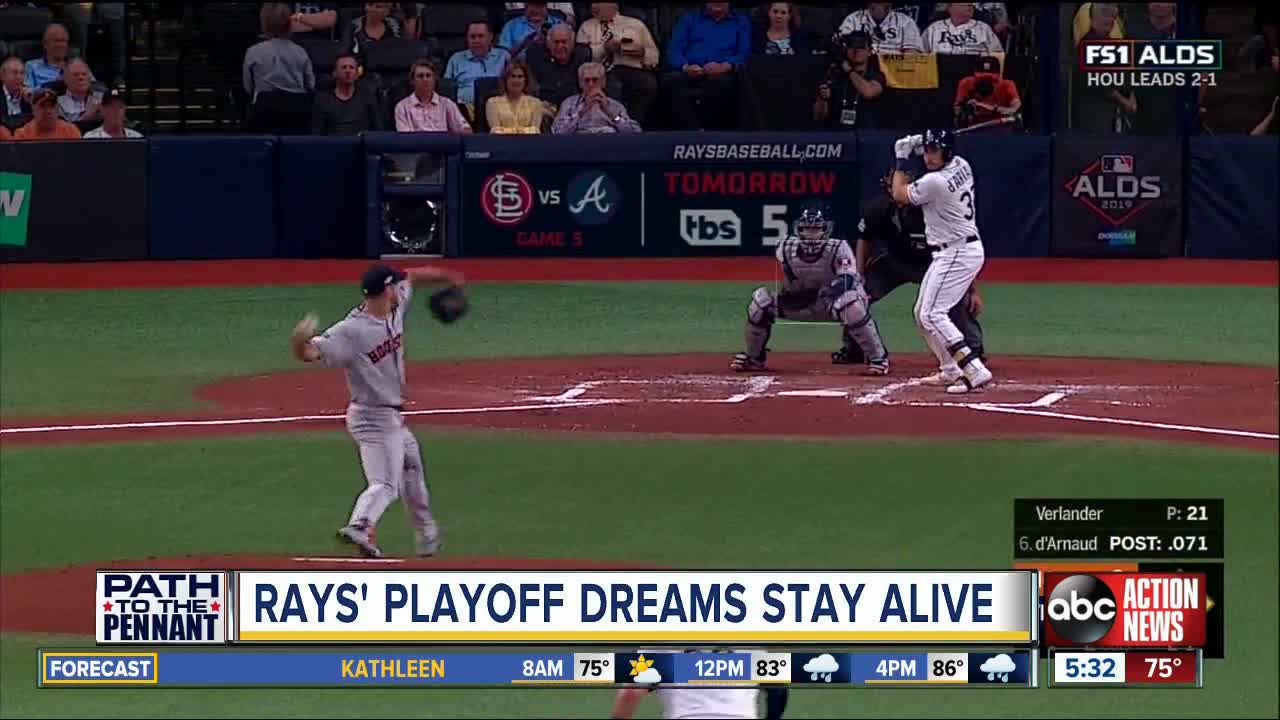 Willy Adames homered and made a sensational relay throw from shortstop as the Rays beat the Astros Tuesday night. 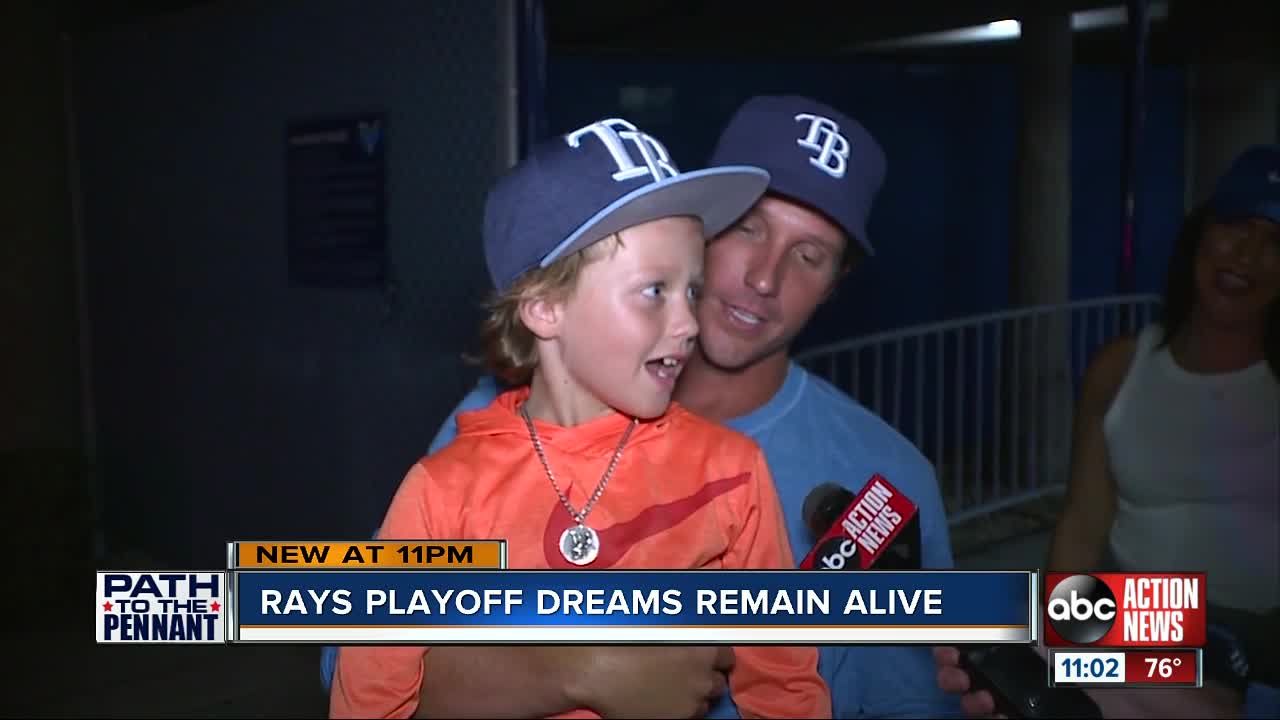 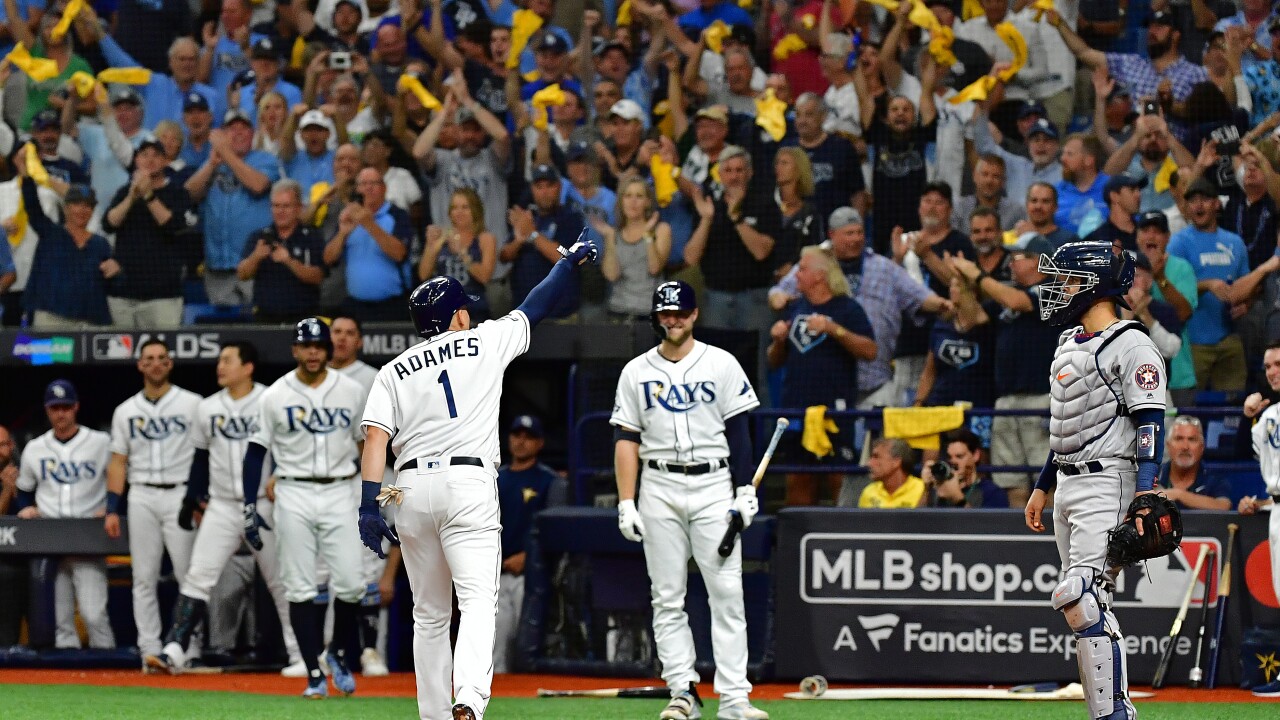 ST. PETERSBURG, Fla. (AP) — The Tampa Bay Rays never doubted themselves, even with Justin Verlander looking to end their season.

Willy Adames homered and made a sensational relay throw from shortstop, and the Rays chased the Houston ace early in beating the Astros 4-1 Tuesday night to even their AL Division Series at two games apiece.

With their second victory in two days over one of baseball's best pitchers, the Rays believe the rest of the country is finally getting a taste of what they're capable of accomplishing.

"Hey, I hate to say it: About time, because we have a really good team over here," Tommy Pham said.

"To win 96 games in this division (the AL East) with New York and Boston is an impressive feat," he added. "All year, we've been getting talked down. And now, with the last two games, the way we played, the whole world has seen how good of a team we are and how well-rounded we are."

The series shifts back to Houston for a deciding Game 5 on Thursday night.

Blake Snell to close it out?

Blake Snell to close it out. #ALDS pic.twitter.com/NyXnkGxeG1

Astros star Gerrit Cole is scheduled to pitch for the heavily favored AL West champs, who led the majors with 107 wins this season and have one more chance to close out the feisty Rays. Tyler Glasnow is expected to start for Tampa Bay.

The winner plays the New York Yankees in the AL Championship Series.

Pham homered for the second time this postseason and Ryan Yarbrough combined with five other pitchers on a six-hitter for Tampa Bay. Cy Young Award winner Blake Snell came out of the bullpen for his first career relief appearance, holding off Houston in the ninth inning to earn the save.

Verlander, starting on short rest after dominating the wild-card Rays in Game 1, looked uncomfortable on the mound at Tropicana Field and was pulled in the fourth after giving up four runs.

Verlander, whose eight career ALDS victories are a major league record, yielded three runs in the first. Adames homered leading off the fourth to make it 4-0, and the eight-time All-Star didn't make it through the inning.

Sound on and up. #ALDS pic.twitter.com/sgPxlMmiDx

"A good approach for those guys in the first, and then honestly, I need those infield singles to be caught. When you don't have it, you need the balls that are put in play to go your way, and they didn't," said Verlander, who only started on short rest three other times during his career, including the 2011 ALDS, when he started Games 1 and 3 after Game 1 was suspended in the second inning.

"Obviously, not the way you would script it," he added. "It sucks."

The Rays helped themselves by playing stellar defense, especially with the Astros threatening to cut into their three-run deficit in the fourth.

With speedy Jose Altuve on first base, Yordan Alvarez hit a long double that short-hopped the center field wall. Two-time Gold Glove winner Kevin Kiermaier quickly grabbed the ball and fired to his cutoff man, Adames. He turned and executed a perfect relay home just in time to nail Altuve trying to score.

"That was probably the most incredible relay throw from an infielder I've ever seen," Kiermaier said. "That was such a huge moment for us, huge momentum shift, and it just doesn't get any better than that."

Rays opener Diego Castillo struck out the first three batters and went 1 2/3 innings. He was followed by Yarbrough, who worked two scoreless innings to get the win. Nick Anderson handed off to Colin Poche, who gave up an eighth-inning homer to Robinson Chirinos.

Emilio Pagan and Snell finished up for the Rays, who have rebounded from losing the first two games of the series on the road to Verlander and Houston's other main headliner, Cole.

"A lot of credit to them for their preparation and putting themselves in this position," Cole said. "I certainly think they've earned it. ... They've played calm, cool and collected."

Altuve drew a one-out walk and Alex Bregman singled to enable the Astros to bring the potential tying run to the plate in the ninth.

Snell, who started Game 2, entered and struck out Alvarez before retiring Yuli Gurriel on a sharp grounder up the middle — exactly where the Rays were playing him — to end the game.

Charlie Morton, who helped Houston win the World Series two years ago, began the Rays' comeback by beating his former team 10-3 on Monday.

Needing one victory to advance to the ALCS for the third straight year, the Astros opted to start Verlander on just three days of rest in hopes of closing out the Rays, who have won three elimination games in a week to stay in the running for their first trip to the ALCS since 2008.

Houston manager AJ Hinch said it was an easy decision to go with Verlander, who was 8-0 in 12 ALDS appearances, including 11 starts, before Tuesday night.

Verlander limited the Rays to one hit over seven scoreless innings in Game 1, and it looked as though Tampa Bay might be in for another long night when he fanned Austin Meadows to begin the bottom of the first.

What transpired over the next six batters — beginning with Pham's 408-foot shot to left-center that got a yellow flag-waving, boisterous crowd of 32,178 into it — could fuel some second-guessing if Houston doesn't win Game 5.

The start @RaysBaseball was hoping for. #ALDS pic.twitter.com/vfxm2xfM1Z

"In the postseason, you ask somebody to do something that's not normal, it's always a little nerve-wracking," Hinch said.

"I understand with the results, it's tough," he added. "I felt it was the best chance to win the series — JV today and Gerrit in Game 5 if we needed it. We're going to test the latter part of that in Game 5."

Four of the next five Rays also reached base, building the lead to 3-0. Travis d'Arnaud hit an RBI single and Joey Wendle lined a double into the right-field corner to drive in another run.

"I always say when we score early, we're very, very dangerous," Kiermaier said. "Three runs in the first inning, you couldn't draw it up any better. We wanted him to throw as many pitches as possible. We wanted to get him out of the game quick, and we did just that."

Seating capacity at Tropicana Field was reduced to 25,025 this year, but the Rays removed the tarps covering a portion of the upper deck to allow more fans an opportunity to buy tickets for Games 3 and 4 of the ALDS.

"Certainly, players like to play in front of a lot of fans. Everybody recognizes that," manager Kevin Cash said. "But when it mattered, when it counted ... they showed up."

Astros SS arlos Correa returned to the lineup for the ALDS after missing the final seven games of the regular season due to back tightness that flared up during a flight to Seattle. He said Tuesday he's 100 percent healthy and isn't placing any limitations on himself in the playoffs. He also revealed what he's doing to try to avoid his back tightening up again during a plane ride.

"I'm laying on the aisle," Correa said, adding he "felt awesome" when he arrived in Florida before Game 3.

"Got my sleep, got my rest," he explained. "Just happy to be back with the team and on the field once again."