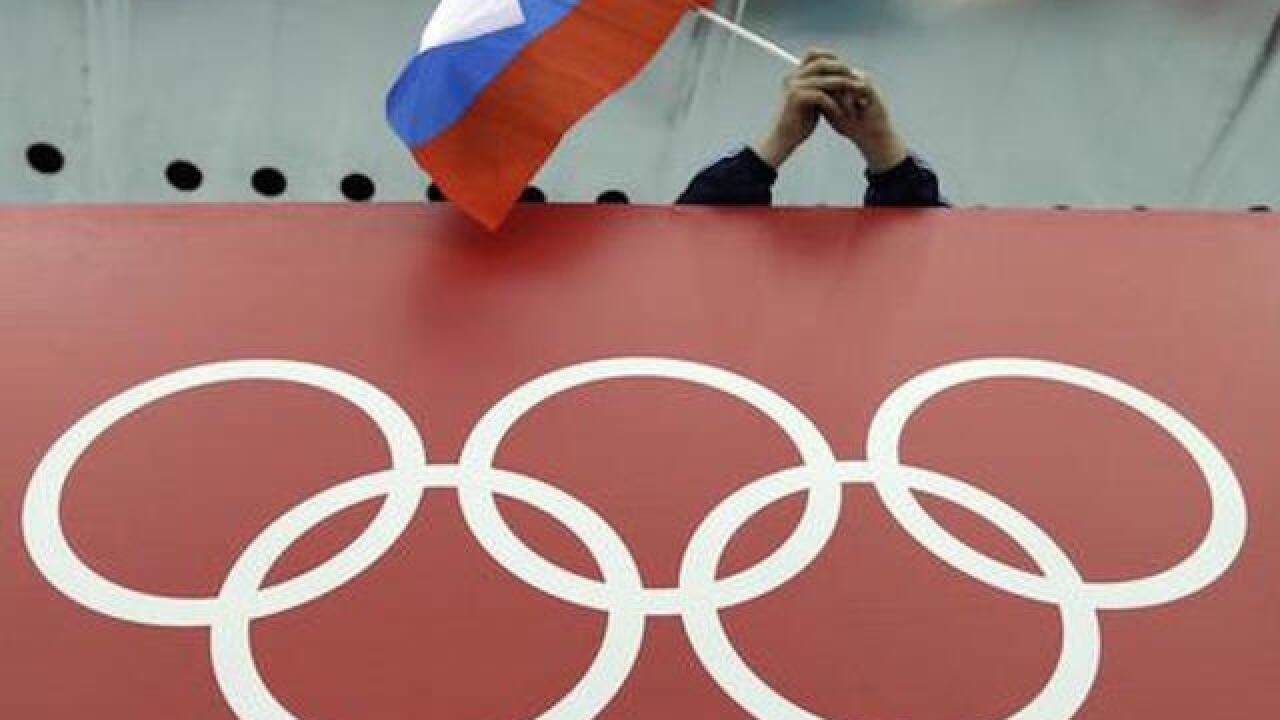 David J. Phillip
<p>FILE - In this Feb. 18, 2014 file photo, a Russian skating fan holds the country's national flag over the Olympic rings before the start of the men's 10,000-meter speedskating race at Adler Arena Skating Center during the 2014 Winter Olympics in Sochi, Russia. The IOC's ruling 15-member executive board will meet Sunday, July 24, 2016 via teleconference to weigh the unprecedented step of excluding Russia as a whole from the 2016 Rio Olympic Games because of systematic, state-sponsored cheating. (AP Photo/David J. Phillip, file)</p>

The decision, announced after a three-hour meeting of the International Olympic Committee's executive board, came just 12 days before the Aug. 5 opening of the games.

"We had to balance the collective responsibility and the individual justice to which every human being and athlete is entitled to," IOC President Thomas Bach said.

The IOC rejected calls from the World Anti-Doping Agency and many other anti-doping bodies to exclude the entire Russian Olympic team following allegations of state-sponsored cheating.

Russia's track and field athletes have already been banned by the IAAF, the sport's governing body, a decision that was upheld Thursday by the Court of Arbitration for Sport, and was accepted by the IOC again on Sunday.

Calls for a complete ban on Russia intensified after Richard McLaren, a Canadian lawyer commissioned by WADA, issued a report Monday accusing Russia's sports ministry of overseeing a vast doping program of its Olympic athletes.

McLaren's investigation, based heavily on evidence from former Moscow doping lab director Grigory Rodchenkov, affirmed allegations of brazen manipulation of Russian urine samples at the 2014 Winter Games in Sochi, but also found that state-backed doping had involved 28 summer and winter sports from 2011 to 2015.

But the IOC board, meeting via teleconference, decided against the ultimate sanction, in line with Bach's recent statements stressing the need to take individual justice into account.

"An athlete should not suffer and should not be sanctioned for a system in which he was not implicated," Bach told reporters on a conference call after Sunday's meeting.

"This is not about expectations," he said. "This is about doing justice to clean athletes all over the world."

Russian Olympic Committee president Alexander Zhukov presented his case to the IOC board at the beginning of Sunday's meeting, promising full cooperation with investigations and guaranteeing "a complete and comprehensive restructuring of the Russian anti-doping system."

The IOC also rejected the application by Russian whistleblower Yulia Stepanova, the 800-meter runner and former doper who helped expose the doping scandal in her homeland, to compete under a neutral flag at the games.

The IOC said Stepanova, now living in the United States, did not meet the criteria for running under the IOC flag and, because she had committed doping violations, did not satisfy the "ethical requirements" to compete in the games. However, the IOC added that it would invite her and her husband, Vitaly Stepanov, to attend the games.

While deciding against an outright ban, the IOC said it was imposing tough eligibility conditions, including barring entry for the Rio Games of any Russian athlete who has ever been sanctioned for doping.

The IOC said it would accept the entry only of those Russian athletes who meet certain conditions set out for the 28 international federations to apply.

The federations "should carry out an individual analysis of each athlete's anti-doping record, taking in account only reliable adequate international tests ... in order to ensure a level playing field," the IOC said.

The committee asked the federations to examine the information and names of athletes and sports implicated in the McLaren report. Any of those implicated should not be allowed into the games, it said.

The IOC said the federations would have to apply their own rules if they want to ban an entire Russian team from their events in Rio, as the IAAF has already done for track and field.

Russian entries must be examined and upheld by an expert from the Court of Arbitration for Sport, the IOC said.

Russian athletes who are cleared for the games will be subjected to a "rigorous additional out-of-competition testing program."

The IOC also reiterated its "serious concerns" about the weaknesses in the fight against doping, and called on WADA to "fully review their anti-doping systems." The IOC said it would propose measures for more transparency and independence.

The decision for the IOC was loaded with geopolitical ramifications.

Never has a country been kicked out of the Olympics for doping violations. And Vladimir Putin's Russia is a sports powerhouse, a huge country seeking to reaffirm its status on the world stage, and a major player in the Olympic movement. Many international Olympic officials and federation leaders have close ties to Russia, which has portrayed the exclusion of its track athletes and calls for a complete ban as part of a political, Western-led campaign.

Putin, citing the U.S. and Soviet-led boycotts of the 1980 and 1984 Games, said the Olympic movement "could once again find itself on the brink of a division." And former Soviet leader Mikhail Gorbachev wrote an open letter to Bach on Friday to plead against a blanket ban.

Anti-doping leaders had argued that the extent of state-backed doping in Russia had tainted the country's entire sports system, and the only way to ensure a level playing field was to bar the whole team, even if some innocent athletes will lose out.

Russia faces a possible ban from the Paralympic Games. Citing evidence in McLaren's report of doping among Russian Paralympic athletes, the International Paralympic Committee said Friday it will decide next month whether to exclude the country from the Sept. 7-18 event in Rio.