Tampa Bay Lightning give up 5 goals in 3rd period, lose 4th game in a row 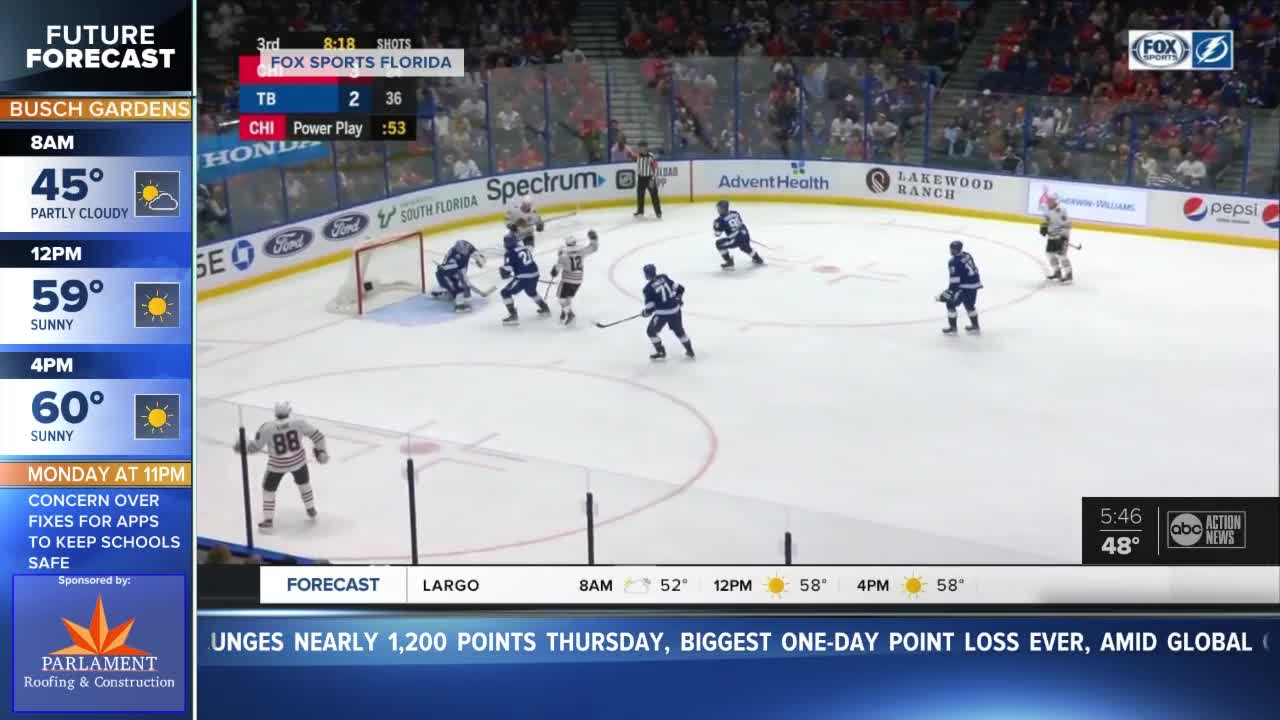 Dominik Kubalik recorded a hat trick in the third period as the Blackhawks rallied past the Lightning 5-2 on Thursday night. TAMPA, Fla. (AP) — Dominik Kubalik recorded a hat trick with three goals in the third period, and the Chicago Blackhawks rallied past the Tampa Bay Lightning 5-2 on Thursday night.

Slater Koekkoek scored his first goal of the season and Brandon Saad added another score as Chicago beat the Lightning for the first time in regulation since Dec. 13, 2009.

The Blackhawks scored three goals in a span of 5:20 and five goals total in the third period to erase a two-goal deficit. Kubalik tied the game at 5:02 to tie the game, provided an insurance goal on the power play at 11:43 and capped it off with his third of the period into an empty net at 17:29.

“I’m really happy that it happened,” said Kubalik, who has seven goals in his past seven games and leads all rookies with 29 on the season. “I have no idea (what’s clicking). I would like to know as well. I’m just trying to the same thing…be around the net. I’ve been lucky.”

Tampa Bay had won eight consecutive games against Chicago and was 14-0-2 in the last 16 meetings in the regular season.

Nikita Kucherov and Brayden Point each had a goal and an assist for Tampa Bay, which lost its fourth consecutive game. Curtis McElhinney stopped 22 shots for the Lightning, which had been 28-0-4 on the season when entering the third period with the lead.

“You don’t see that happen very often and it hasn’t happened to us too often,” Lightning head coach Jon Cooper said. “It tends to happen once per year, you don’t want it to happen, but it happened tonight, and you just have to make sure you don’t let it happen again.’’

Koekkoek, a 2012 first-round pick by the Lightning who was traded to Chicago last season, fired a shot from the right point through traffic for the eventual winner. It was his first goal since April 5.

“It felt amazing obviously,” Koekkoek said. “I was lucky enough to get the winner.’’

After a combined eight power play chances through the opening 32 minutes of play, Point finally broke through during even-strength play at 15:31 of the second period. He wheeled around the zone from the left circle to the high slot and zipped a wrist shot through traffic for his 24th goal of the season.

Kucherov scored 17 seconds into the third period. He scored from off to the side of the net on a snap shot off a feed from Point for his 32nd goal of the season.

Chicago gained momentum off a fifth power-play chance after Luke Schenn was whistled for interference at 2:28 of the third. Eight seconds after the man advantage ended, Saad scored off a rebound in front at 4:36.

“I thought we responded really well in the third, especially after we gave up the second (goal),” Chicago head coach Jeremy Colliton said. “It could’ve went the other way but the guys responded and we found a way.’’

On the next shift, Tampa Bay was called for an intentional offside call, sending the faceoff back to the Lightning zone. Kubalik found another rebound and tied the game 26 seconds after Saad’s goal. Kubalik scored his second on the power play at 11:43 before Koekkoek’s winner, which came after two minutes after Tampa Bay failed to convert on a fifth power play chance.

“It’s a tough one to swallow, we did a lot of good things for 42 minutes ... then we take a couple of penalties, so we are playing with a little bit of fire,” Lightning defenseman Victor Hedman said. “I don’t know how many positives we can take out of today but at the end of the day you can’t give up five goals in one period. That’s not good enough.’’

NOTES: Tampa Bay captain Steven Stamkos missed the game with an undisclosed injury as he underwent further testing on Thursday. … Lightning RW Pat Maroon was scratched due to injury. … Lightning LW Blake Coleman missed the game to be with his wife, as the couple had their first child. … Chicago D Nick Seeler was a healthy scratch.

Blackhawks: At Florida Panthers on Saturday.