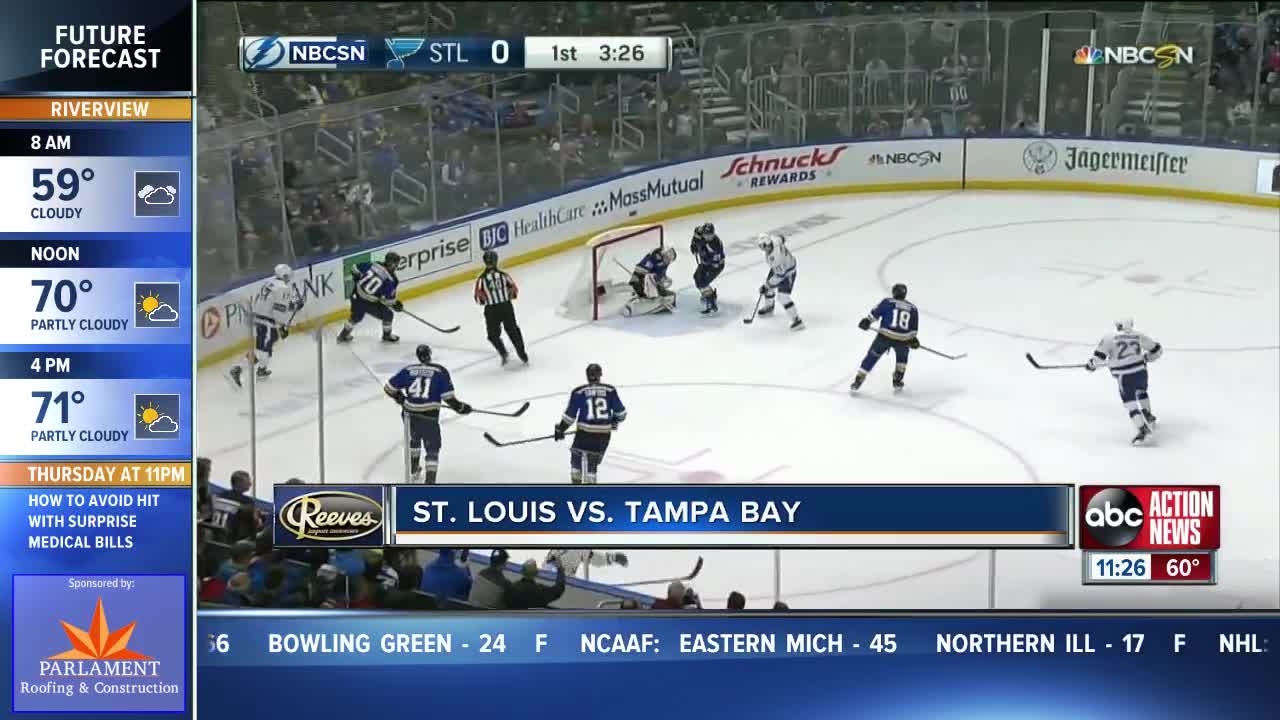 There was no storybook ending for St. Louis native Pat Maroon in his return home Tuesday night. Oskar Sundqvist and David Perron scored to lead the Blues to a 3-1 victory over the Tampa Bay Lightning, spoiling Maroon’s much-anticipated return after helping his hometown team to a Stanley Cup title last season. ST. LOUIS (AP) — There was no storybook ending for St. Louis native Pat Maroon in his return home Tuesday night.

Oskar Sundqvist and David Perron scored to lead the Blues to a 3-1 victory over the Tampa Bay Lightning, spoiling Maroon’s much-anticipated return after helping his hometown team to a Stanley Cup title last season.

Maroon made his first trip back to St. Louis since signing a one-year contract with the Lightning in the offseason. He scored the game-winning goal in double overtime of Game 7 against Dallas in the second round of the 2019 playoffs to send the Blues to the Western Conference final for the second time in four years.

Before the opening faceoff, Blues general manager Doug Armstrong presented Maroon with his championship ring on the ice with former teammate Vladimir Taraskeno, who is out with an injury, alongside as well. Maroon received a standing ovation and as he waved to the crowd, the fans responded with thunderous cheers.

“It was really nice of them,” Maroon said. “It was a good, warm welcome for me and my family. It’s a memory I’ll never forget.”

“I was happy for Pat,” Berube said. “He was a big part of our team last year and we all love him. I was happy to see him get his ring.”

However, he did not talk to his former player.

“He’s on the other team now,” Berube said. “I don’t talk to other teams before games. I sent him a text. I texted him after the game and congratulated him.”

St. Louis grabbed a 2-1 lead in the third period when Sundqvist scored on a wrist shot from the right circle.

“It was an awesome pass from (Robert) Thomas there,” Sundqvist said. “I decided to shoot right away. I didn’t really know it went in. It was nice to see it laying behind in there.”

The scoring chance developed after Sundqvist fell down. He got back up in time to receive a pretty, no-look, drop pass from Thomas and beat Andrei Vasilevskiy at the 6:16 mark.

As soon as he made the pass, Thomas was hit and fell to the ice.

“I saw him right when I got the puck,” Thomas said. “I had a gut feeling it was the right play to do. I try and trust my gut as much as I can. My gut told me he was there so I just threw it there.”

“I think we really didn’t play that good all around,” Maroon said. “We turned the puck over a lot and they’re a team that will wear you down. We gave them every opportunity to make their game really successful.”

The defending Stanley Cup champions were 0-1-2 in their previous three games.

Tampa Bay struck first when Anthony Cirelli scored at 16:36 of the first period. From behind the red line, Alex Killorn got the puck from Victor Hedman. Killorn saw Cirelli, who was parked at the top of the crease, and snapped a quick pass. Cirelli’s wrist shot went through the legs of Jordan Binnington for his third goal of the season.

The Blues outshot the Lightning 18-4 and were on the power play three times in the second but only produced one goal. Tampa Bay had one power-play chance in the period.

Tampa Bay coach Jon Cooper lamented how the Lightning turned the puck over too many times.

“It was a winnable hockey game,” Cooper said. “In the end, if you turn the puck over, it gives the other team momentum. You don’t have it and then things are out of sorts.”

Perron got his ninth goal to tie it 1-all when he tapped in a rebound of Colton Parayko’s shot from in front at 17:24.

Earlier in the period, Binnington made back-to-back, highlight-reel saves on short-handed attempts by the Lightning. Binnington finished with 17 stops.

“We were on a power play and they got a break,” Binnington said. “It’s all about timing in this game. I think that was big for us. We gained momentum and then got some chances. We played a solid game.”

Tampa Bay was 0 for 2 on the power play and fell to 1-7-0 when it doesn’t score with the man advantage. The Lightning didn’t get a shot on goal on either power-play chance.

“We did a good job defensively,” Berube said.

NOTES: Blues C Ryan O’Reilly has no goals in 11 home games. ... The Blues opted for rest and did not skate Tuesday morning. ... Syracuse Crunch (AHL) forward Cory Conacher was recalled to the Lightning for the second time this season. Conacher’s first trip lasted only a day, however, and he didn’t crack the Tampa Bay lineup. The 29-year-old Conacher has skated in 16 games with the Crunch this season, posting five goals and 12 points to go along with 17 penalty minutes. He has appeared in 189 NHL games over six seasons, collecting 28 goals and 74 points. ... St. Louis swept the season series in 2018-19, winning both games by one goal. The Blues are 9-3-0 in their last 12 against the Lightning and 7-1-0 in the past eight meetings at Enterprise Center. The Lightning have four wins all-time at St. Louis in 21 attempts.

Lightning: At the Chicago Blackhawks on Thursday.