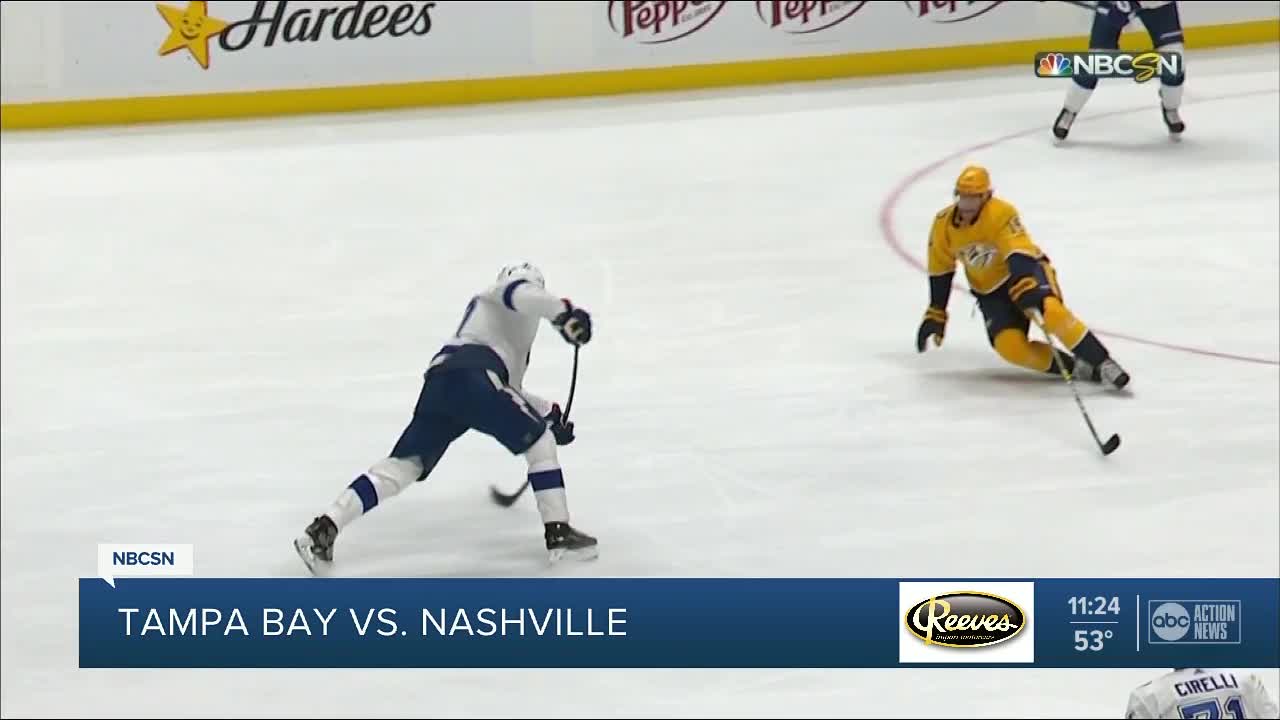 After giving up the lead midway through the third period, the Tampa Bay Lightning stuck with it and pulled out a needed win in overtime. Nikita Kucherov scored at 2:35 of the extra period to give Tampa Bay a 3-2 victory over the Nashville Predators on Tuesday night. Victor Hedman and Ondrej Palat also scored and Andrei Vasilevskiy stopped 30 shots as the Lightning snapped a three-game skid. NASHVILLE, Tenn. — After giving up the lead midway through the third period, the Tampa Bay Lightning stuck with it and pulled out a needed win in overtime.

Nikita Kucherov scored at 2:35 of the extra period to give Tampa Bay a 3-2 victory over the Nashville Predators on Tuesday night.

“We had to find a way to close out some games,” Tampa Bay coach Jon Cooper said. “But for us to battle back and get the two points, it’s a Western Conference team, so we’re not as worried about giving up that extra point. The boys have deserved this. We’ve played some pretty good hockey here.”

Kyle Turris had a goal and an assist, and Calle Jarnkrok also scored for Nashville, which has lost three of its last four. Pekka Rinne finished with 28 saves.

“It’s a tough loss,” Nashville coach Peter Laviolette said. “You battle back and you kill some penalties at the end, you get yourself in a position for overtime, so I think the loss is tough. You want to walk away with that second point.”

In overtime, Steven Stamkos found Kucherov with a backdoor pass, where he had an easy tap-in past Rinne.

“I just got open for (Stamkos) and he found my stick and I got lucky,” Kucherov said.

Turris, who had been a healthy scratch the last seven games, tied the score 2-2 at 9:51 of the third on a power-play goal.

“I felt great,” Turris said. “I felt like I played the exact same game I would have played if I didn’t sit seven straight games. I’m playing hockey and I’m playing my game and that’s all I’m going to do.”

Hedman scored the game’s first goal at 7:46 of the opening period. After taking a pass from Stamkos, Hedman took a slap shot from the high slot that deflected off of the stick of Nashville’s Craig Smith and beat Rinne just underneath the crossbar.

The goal was one of just three Lightning shots in the first. Nashville countered with 13.

Jarnkrok tied it at 6:13 of the second. In the left circle, Turris won a faceoff back to Jarnkrok, who fanned on his initial shot attempt. After gathering the puck in the high slot, Jarnkrok beat Vasilevskiy with a wrist shot.

The tie was short lived as Palat connected on a one-timer 31 seconds later off of a pass from Kucherov.

Midway through the second, the Lightning had a full five-minute power play after Nashville’s Ryan Johansen was given a major for elbowing and a game misconduct after he hit Brayden Point in the Nashville zone. Tampa only managed one shot on goal during the power play.

“We didn’t get frustrated there when things weren’t as pretty with the play, but our guys stuck with it and it was great to see us be rewarded tonight,” Lightning defenseman Ryan McDonagh said.

NOTES: The Predators have earned at least a point in their last 13 against Tampa Bay (10-0-3). ... Nashville C Mikael Granlund did not play due to a lower-body injury. He’s listed as day-to-day. ... NASCAR drivers Kevin Harvick and Joey Logano attended the game. ... Kucherov extended his point streak to six games… Vasilevskiy earned his first victory against the Predators. He’s not 1-3-1 in his career against Nashville.