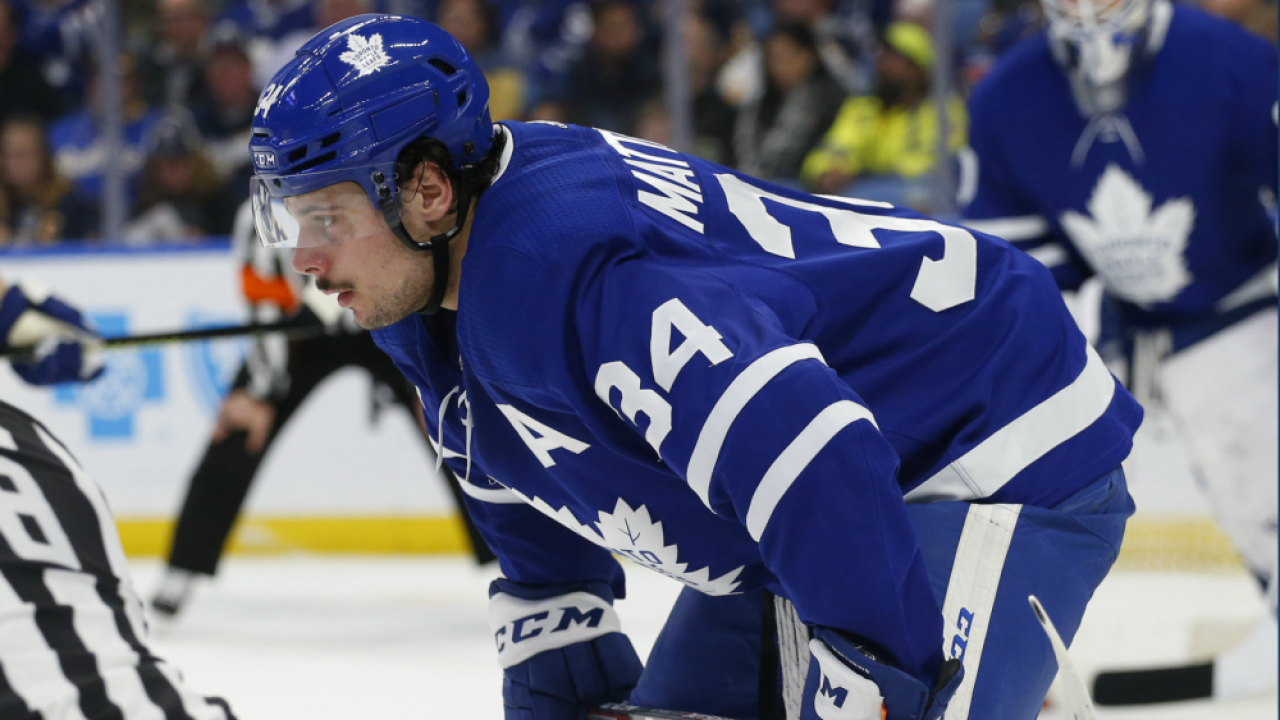 (Copyright 2020 The Associated Press. All rights reserved. This material may not be published, broadcast, rewritten or redistributed.)
AP Photo/Jeffrey T. Barnes
Toronto Maple Leafs forward Auston Matthews (34) looks on during the third period of an NHL hockey game against the Buffalo Sabres, Friday, Nov. 29, 2019, in Buffalo, N.Y.

Auston Matthews scored his 47th goal of the season and Frederik Andersen made 32 saves as Toronto beat the Tampa Bay Lightning 2-1 on Tuesday night.

Mitch Marner and John Tavares each had two assists for the Leafs, who had star defenseman Morgan Rielly back in the lineup for the first time since he broke his foot on Jan. 12.

“We’ve talked about being more consistent and now more than ever, just given the standings, the time of year and remaining games, it’s an opportunity for us to start to play well and build some momentum,” said Rielly, who missed 23 games due to injury. “If you look back to this time last year our performances weren’t what we wanted them to be in time for playoffs ... this year we’ve got a chance to fix that and change that.

“It’s important that we take that seriously.”

“You have lots of time to reflect,” said Matthews. “Our first period is a good starting point for us and how we want to play. We’ve got to make sure we do that more consistently and throughout the game.”

Lightning head coach Jon Cooper had a different view of the opening period, stating bluntly the only thing missing was “effort” from his team.

“It was disappointing,” he said. “During the course of a year ... it’s 82 games, three periods a game, it’s a lot of periods of hockey. For the most part, we have a lot of good ones. There’s a small amount that we could have been better, and then there’s a couple that have been embarrassing.

“That would fall in the embarrassing (category).”

Tied 1-1 through 40 minutes, Matthews scored Toronto’s second power-play goal of the game when he took a cross-ice feed from Marner down low at 3:38 of the third period.

The Leafs entered the game on an 0-for-14 run with the man advantage, but finished 2 for 4 after also connecting twice on four opportunities in a 4-3 victory at Tampa Bay on Feb. 25.

Toronto defenseman Travis Dermott sent a shot off the post midway through the third as the Leafs came close to adding a third goal.

The Lightning pressed late in the final period, but Andersen was too tough, making a big stop on Kevin Shattenkirk from the slot, to secure a much-needed win for the Leafs.

Tampa Bay came in six points back of the Boston Bruins for first in the NHL’s overall standings and in the Atlantic. The Lightning have lost two straight after getting stunned 5-4 in a shootout by the last-place Detroit Red Wings on Sunday.

Down 1-0 after a first that could have seen Toronto up by three or four if not for Vasilevskiy, the Lightning got even with 4:37 left in the second.

Brayden Point blew past Leafs defensemen Tyson Barrie and Rasmus Sandin before the puck fell to Nikita Kucherov. His initial shot was stopped, but Palat was there to score his 17th on the rebound.

Making just his second start in the last 10 days, Andersen was terrific earlier in the period with saves on Carter Verhaeghe and Tyler Johnson on partial breaks before snagging a one-timer off the stick of Mikhail Sergachev, who took a shot off the helmet from Matthews in the opening period.

The Leafs came out with one of their best starts, peppering Vasilevskiy on chance after chance in the first as head coach Sheldon Keefe’s move to mix up his lineup paid early dividends.

Toronto led an astonishing 18-0 in attempts on goal — including a Pierre Engvall effort off the post on a Lightning power play — 11 minutes into the game before Tampa Bay directed its first towards Andersen.

Nylander finally got Toronto on the board at 12:42 on a power play to snap an 0-for-15 stretch. He scored on a rebound for his 31st after Vasilevskiy stopped a Tavares redirection.

Andersen had little to do at the other end until late in the period when the Lightning finally started to find their legs, making a couple nice saves before Palat clanked the iron on a shot that stayed out.

“We’ve talked a lot about our starts and consistency in our play,” Leafs head coach Sheldon Keefe said. “We moved the puck extremely well. It was a game we just played with the puck on our stick a lot.

With the NHL joining the NBA, MLB and MLS in restricting access to locker rooms in hopes of reducing the risk of spreading coronavirus, the Leafs and Lightning held their pregame availabilities with reporters in separate media centers at Scotiabank Arena.

NOTES: Toronto also usually unfurls two massive flags during O Canada — the traditional Maple Leaf and one with the team’s logo — for the crowd to pass across the lower bowl, but that practice has been shelved. ... There appeared to be more empty seats than usual for the game, especially one involving two of the league’s highest-scoring teams, and fans were advised before puck drop and at the end of every period on ways to prevent the spread of coronavirus.