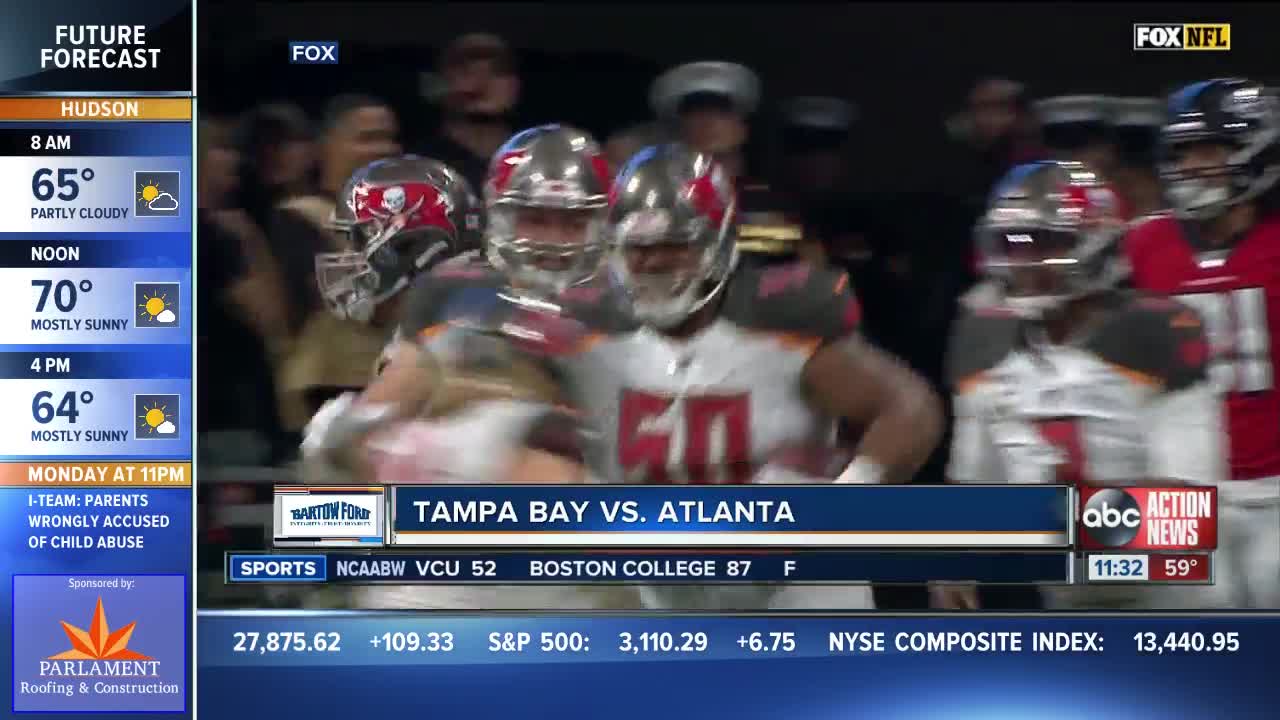 Massive defensive lineman Vita Vea turned receiver to haul in his first career touchdown, one of three scoring throws by Jameis Winston as the Tampa Bay Buccaneers escaped last place in the NFC South with a 35-22 rout of the Atlanta Falcons on Sunday. Winston shook off two more interceptions to post his sixth straight 300-yard passing game, leading the Buccaneers (4-7) to just their second victory in the last seven games. 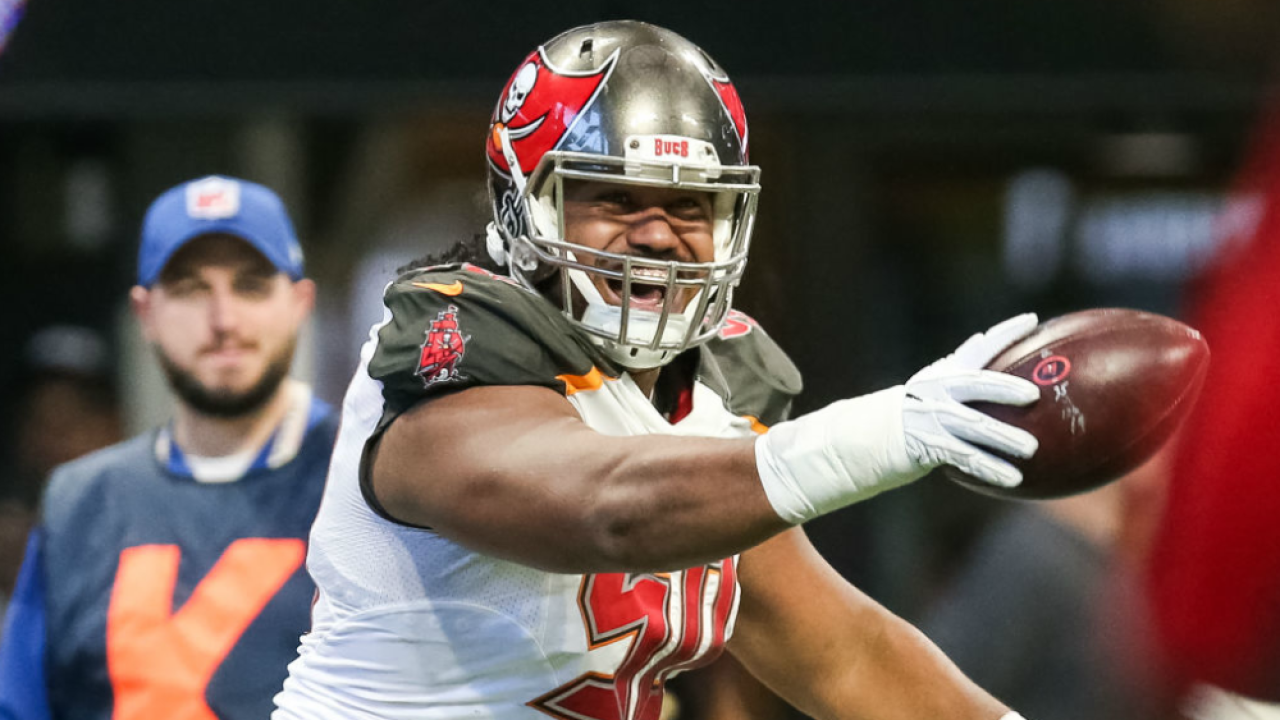 ATLANTA (AP) — Vita Vea worked on the play during the final day of practice. Still, when he got the call from quarterback Jameis Winston, it was a bit of a shock.

Even more stunning was the result.

Vea, a 6-foot-4, 347-pound defensive lineman, hauled in a 1-yard touchdown with his first career catch, one of three scoring passes thrown by Winston to lead the Tampa Bay Buccaneers past the Atlanta Falcons 35-22 on Sunday.

“I scored?” Vea said, breaking into a hearty laugh. “I thought it was a dream.”

Winston shook off two more interceptions to post his sixth straight 300-yard passing game, leading the Buccaneers (4-7) to just their second victory in the last seven games. Chris Godwin had seven catches for a career-best 184 yards, including a pair of touchdowns.

Yet the scoring play everyone will remember was a little 1-yard pass in the final minute of the first half to Vea, a 6-foot-4, 347-pound defensive lineman who has been used as an extra blocker on offense, but never as an offensive weapon.

“The first thing I hear out there is the pass play,” Vea said, relating how he got the call. “Jameis looked at me and was like, ‘Hurry up and get set, Vita.’ And I was like, ‘Oh, damn, here it comes.’”

After lining up at fullback, Vea slipped into the flat on play-action by Winston, going completely uncovered as he gobbled up the short pass.

“For some reason, I thought somebody was behind me,” said Vea, who had not scored a touchdown since he played running back in high school. “So right when I caught the ball, I kind of braced for impact. But no one was there.”

Atlanta (3-8) had pulled even with Tampa Bay at the bottom of the division standings with a modest two-game winning streak. But the Falcons couldn’t keep the momentum going, dropping to 1-4 at Mercedes-Benz Stadium in what has become a lost season for a team that reached the Super Bowl just three years ago.

They were officially eliminated from the NFC South race with five weeks left in the season.

“You've got to score touchdowns and we didn't do a good job of that today,” said Falcons quarterback Matt Ryan, who has his lowest-rated game of the season.

Winston has been picked off an NFL-high 20 times but completed 18 of 28 for 313 yards. His top two receivers, Mike Evans and Godwin, both went past 1,000 yards receiving for the season.

But how about that big guy who now has a single yard receiving?

“I knew he was going to catch the ball no matter where it was, but it was big for team morale to get him a touchdown,” Winston said.

Godwin put Tampa Bay ahead 7-3 with a 71-yard reception in the first quarter, the first TD allowed by the Falcons in more than 10 quarters. He lined up in the slot and caught the Falcons in a mismatch, beating linebacker Deion Jones.

Atlanta reclaimed the lead on Qadree Ollison’s 1-yard leap into the end zone, but the Bucs took control with a dominating second quarter. Godwin reached back with one hand to make a brilliant grab for a 1-yard scoring play, and Vea’s TD stretched the margin to 19-10 at the break. It should have been more, but Matt Gay yanked a couple of extra points wide left.

Tampa Bay took the second-half kickoff and extended the margin, going 75 yards in nine plays capped by 4-yard touchdown run by Ronald Jones II. The Bucs again failed to convert the extra point, this time when Gay’s attempt was blocked.

The kicking woes became a moot point thanks to the Bucs’ defensive dominance. Devin White had two of his team’s six sacks, and Tampa Bay finished off the rout by knocking away the ball from Ryan on a fourth-down play in the closing minutes.

Ndamukong Suh scooped it up and rumbled 6 yards for a touchdown.

Vea also dumped Ryan in the fourth quarter, giving him a memorable sack-TD catch double on the day.

“I still don’t believe it,” Vea said. “It still seems kind of surreal to me.”

Evans joined Randy Moss as the only players to begin their careers with six straight seasons of at least 1,000 yards receiving. It wasn‘t a huge day for Evans, who was limited to 50 yards on four catches. Still, it pushed him to 1,043 yards for the season and part of a select club.

“He was a freak of nature,” Evans said of Moss. “He was so exciting to watch. To be in the same sentence as him is amazing.”

Buccaneers: LB White was able to return after being ordered off the field by the officials early in the second half after a helmet-to-helmet hit with teammate Andrew Adams. ... DL Beau Allen (stinger) and CB Sean Murphy-Bunting (knee) were injured in the second half.

Falcons: WR Julio Jones sustained a shoulder injury in the first half but finished with five catches for 68 yards, going past Calvin Johnson for 30th place on the NFL’s career receiving list with 11,681 yards.

Buccaneers: Travel to Jacksonville to face the Jaguars next Sunday, beginning a stretch of three games in four weeks against AFC South opponents.

Falcons: Short turnaround before they host first-place New Orleans on Thursday night. Atlanta will be going for its second straight upset of the Saints, having pulled off a 26-9 stunner in the first meeting between the NFC South rivals on Nov. 10.