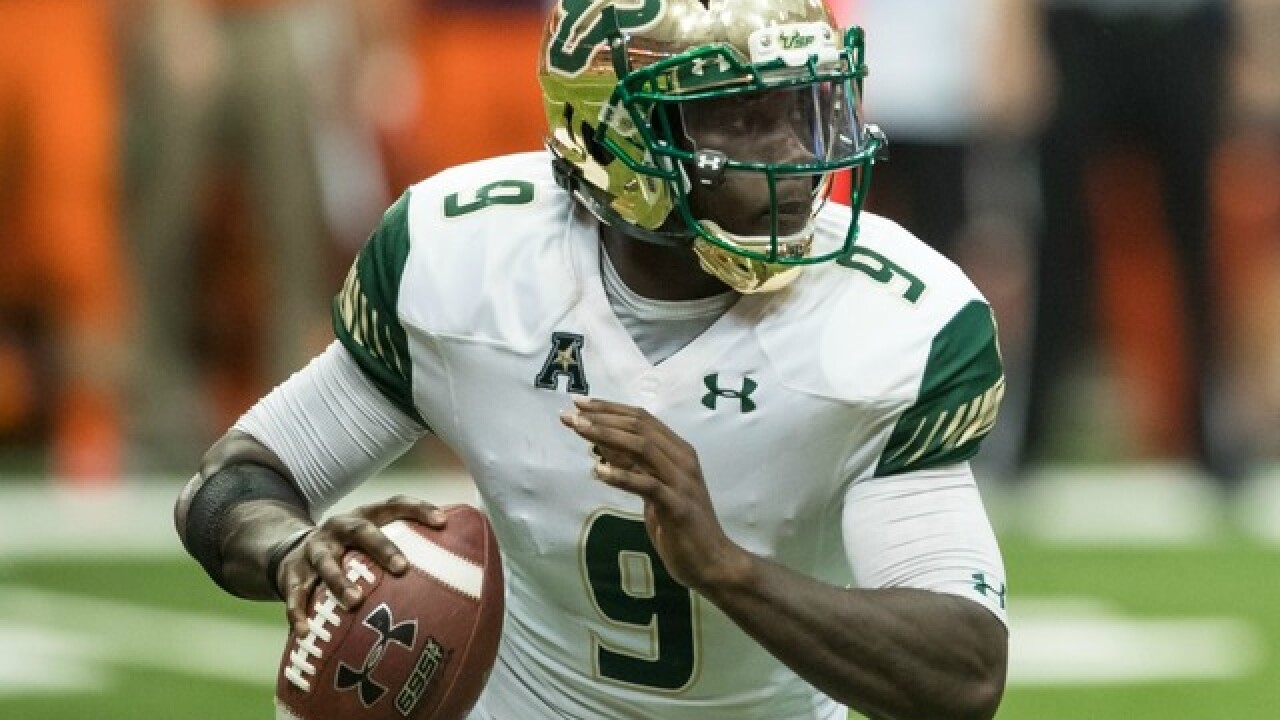 Brett Carlsen/Getty Images
<p><span>SYRACUSE, NY: Quinton Flowers of the South Florida Bulls moves in the pocket during the second half against the Syracuse Orange on September 17, 2016 at The Carrier Dome in Syracuse, New York.</span></p>

South Florida quarterback Quinton Flowers was just finishing his drop-back when blitzing Tulane linebacker Zachery Harris barreled unabated across the line of scrimmage with what looked like a clear path to a drive-stalling sack.

With a sudden step to his right, Flowers eluded the rush and then darted into the same opening through which Harris had blitzed before veering toward the left sideline for a first-down run on third and 10. The scramble exemplified Flowers’ pivotal influence on the game, extending a drive that concluded with Darius Tice’s 45-yard touchdown run on a draw play.

Flowers passed for two touchdowns, ran for 138 yards and another score, and No. 16 South Florida extended the nation’s longest active winning streak to 12 games with a 34-28 victory over Tulane on Saturday night.

“I’d seen what the defense was doing to us and I knew I had to take it in my own hands and convert on third downs — and that’s what I did,” Flowers said. “That’s what this team likes me to do.”

“Our quarterback always has a big day,” Strong said. “A lot of good runs on third down. Quinton was really key for us.”

Jonathan Banks passed for two touchdowns for Tulane (3-4, 1-2), including Terren Encalade’s73-yard catch and run, and the Green Wave nearly clawed back from a 27-point hole. Dontrell Hilliard’s tackle-slipping, 16-yard touchdown run made it a one-possession game with 2:45 left. But Tulane couldn’t recover an onside kick and couldn’t stop Tice’s run on third down, allowing the Bulls to run out the clock and drop the Green Wave to its first home loss this season.

“We don’t have moral victories, but it didn’t look good for us in the beginning of the second half,” Tulane coach Willie Fritz said. “The best thing I saw in the ball game was everybody was fighting throughout the game.”

USF had never before opened a season with seven straight victories. But now first-year coach Charlie Strong can add that accomplishment to his resume, one season after being run out of Texas.

“A lot of people doubted a lot of players on this team,” Flowers said. “A lot of guys on this team just tell each other every day, ‘Why not us? Why not be great?’ We believe in each other.”

South Florida doesn’t have a victory over a Division I Football Bowl Subdivision team that currently has a winning — or even .500 — record. Still, the Bulls at one point led 34-7 on the road over an improved Tulane squad, so they should at least hold steady in the AP Top 25.

South Florida: Flowers’s ability to turn any defensive breakdown into a big play was on full display. His drive-extending scrambles gave Tulane fits, and it will be interesting to see if any defense on the Bulls’ schedule figures out how to stop him — or at least hold USF to fewer than 30 points.

“I believe it was three times where we pretty much sent the house and we lost leverage on the outside,” Tulane coach Willie Fritz said when asked about Flowers’ elusiveness. “We talked and worked on it all week, but when you get out there and see the real deal, it’s a little bit different.”

Tulane: The Green Wave gets credit for not quitting, but needs far more consistency on offense to start moving up the standings in the American Conference.

Flowers scored the game’s opening points when he eluded several defenders behind the line of scrimmage before breaking into the clear for a 21-yard touchdown run in the first quarter.

“Two guys just showed up, and in my mind, I just told myself, ‘Do what I do best,’” Flowers said.

The Bulls went up 13-0 on Tice’s long score, capitalizing on a key defensive stop on fourth-and-1 in its own side of the 50.