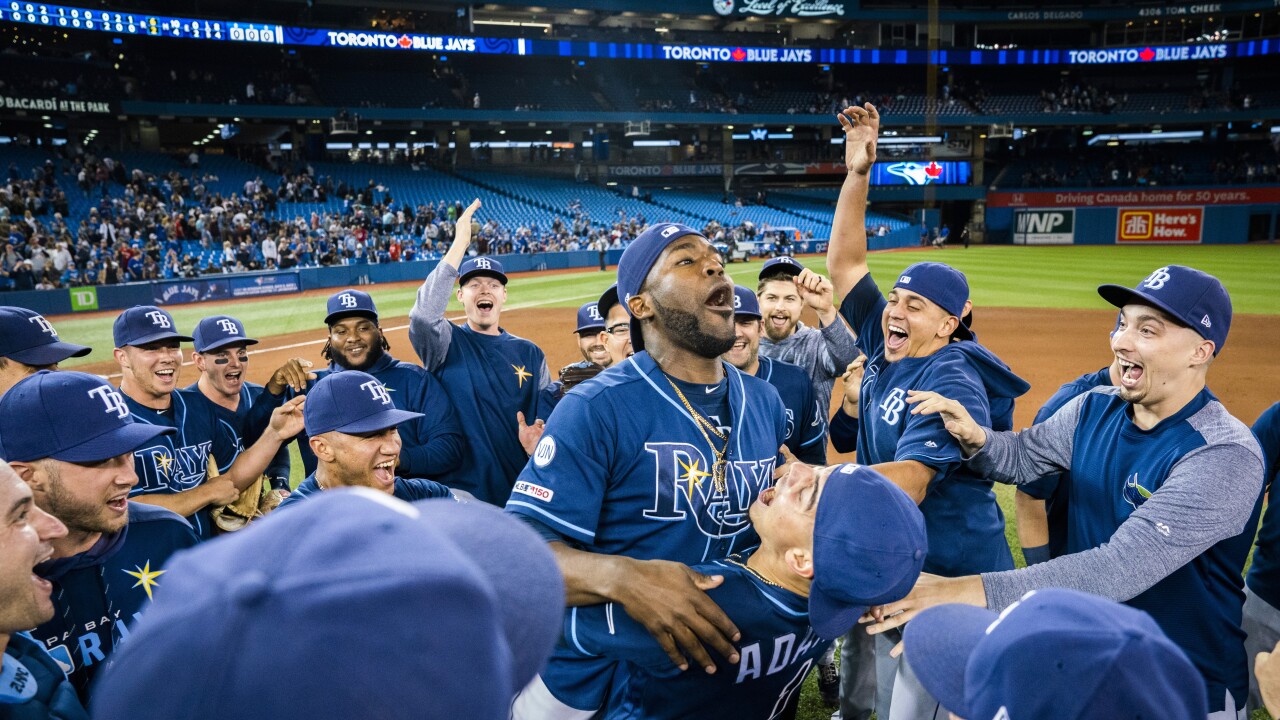 Things are getting wild for the Tampa Bay Rays.

The team clinched a spot in the AL Wild Card game a few days ago, and are set to take on the Oakland Athletics in a one game, winner-take-all affair in California.

The teams are built from the same mold: low payroll, small market (relatively speaking) teams that find ways to win and be competitive every year.

HOW DID WE GET HERE?

The Rays got to this point by going 17-8 in the month of September in a battle that came down to the wire between the A's, Rays and Cleveland Indians. The A's also finished hot, going 19-8 in the final month of the season.

Cleveland finished as the odd man out, the A's locked up the first Wild Card and the Rays snagged the second one, meaning Oakland has home-field advantage Wednesday night.

This game will be the first playoff appearance for Tampa Bay since 2013. The Rays won the Wild Card game that season against the Indians before losing to the Boston Red Sox in the ALDS.

On the other side of the coin, the A's were in this very game last season when they lost to the New York Yankees at Yankee Stadium.

The A's call on left-hander Sean Manaea to take the mound in what will be his first playoff start. He went 4-0 with a 1.21 ERA in five starts in the month of September.

"I think it came down to the fact that since Manaea's been back, he's pitched great every single game out," A's Manager Bob Melvin said Tuesday before his team held a workout. "We were lucky to have two guys to consider in that respect and a luxury to have two guys we'd be comfortable with, but Manaea will start."

Meanwhile, the Rays will throw their most consistent starter, veteran right-hander Charlie Morton.

Unlike Manaea, Morton has played under the bright lights of October. He was part of a 2017 Astros team that won the World Series. Morton's contribution? He threw 10 and 1/3 innings in the series against the high-powered Dodgers, yielding just two runs.

You have to imagine a high-pressure matchup like this one is exactly the type of game the Rays brought Morton to Tampa for.

Morton was Tampa Bay's go-to pitcher throughout the season, throwing far more innings than anyone else on the team, and logging a 3.05 ERA to accompany a 16-6 record.

In the season series, the A's took four out of seven games.

The Rays also have some faces familiar to the A's, as Joey Wendle, Eric Sogard and Emilio Pagan all used to call Oakland home.

“We’ve texted back and forth a little bit. All friendly,” Sogard said. “Everybody is happy for each other, but at the same time, both sides want to be on top in this game.”

Both teams pride themselves on pitching, as the Rays rank #1 in all of baseball with a bullpen ERA of 3.66. Oakland isn't far behind, ranking 7th in Bullpen ERA and 6th overall.

“Their pitching, those guys are electric,” Rays manager Kevin Cash said of the A’s pitching staff. “I know that we have our hands full. We mirror each other in so many ways. Whatever way they go, we like to think we can combat, but they can come back and flip it on us. It’s going to be a very interesting game and how it’s managed.”

The trends do not favor Oakland. The A's have lost eight straight winner-take-all postseason games, including five at home. Both streaks are postseason records.

Shortstop Marcus Semien was the A's best hitter throughout the year, including a strong September.

Meanwhile, Rays outfielder Austin Meadows was just named player of the month in September, hitting .378/.472/.744 with nine homers and 20 RBIs over 24 games.

Whichever team wins the Wild Card game will have a daunting task ahead of them.

Awaiting the Rays/A's in a best of five series is the Houston Astros, a.k.a. the best record in Major League Baseball.

Houston's fearsome pitching trio of Justin Verlander, Gerrit Cole and Zack Greinke is a nightmare for batters, and headline a pitching staff that boasted the third best ERA in baseball.

Couple that with Houston's third most runs scored in the MLB and you have a team solid all the way around.

First pitch for the AL Wild Card Game is Wednesday at 8:09 p.m. on ESPN. You can also live stream it on Watch ESPN.