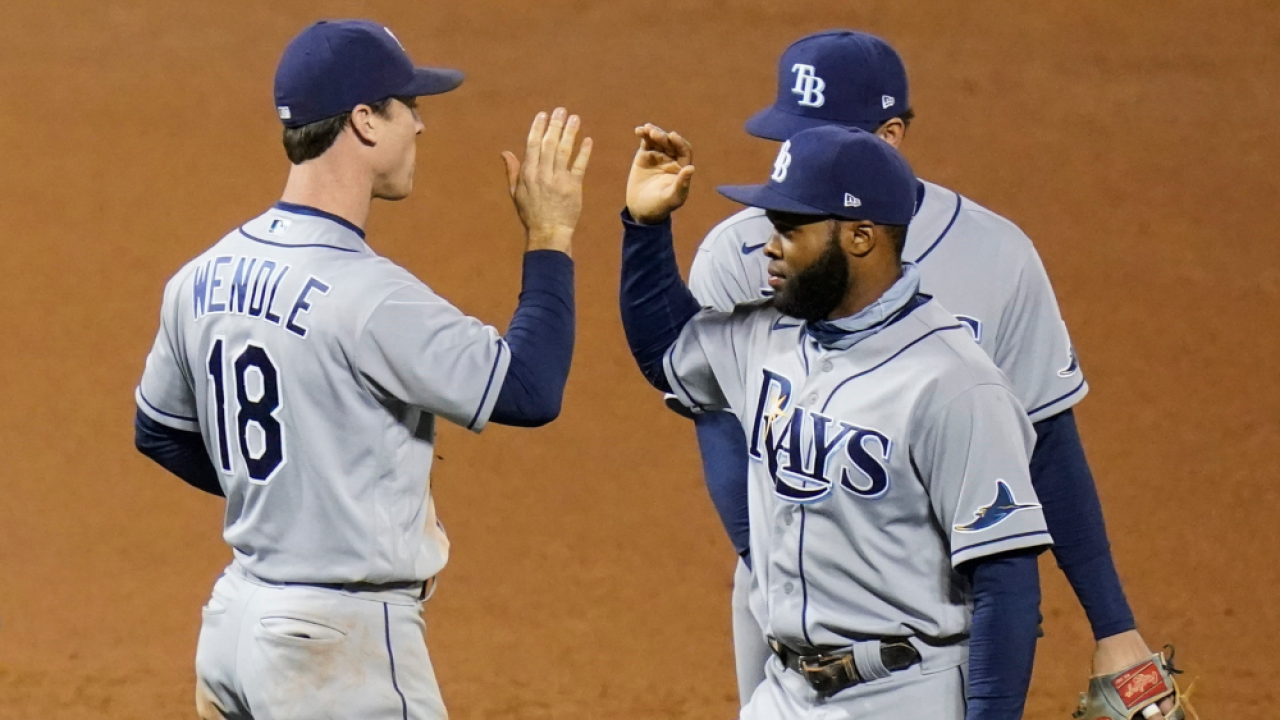 (Copyright 2020 The Associated Press. All rights reserved. This material may not be published, broadcast, rewritten or redistributed.)
AP Photo/Frank Franklin II
Tampa Bay Rays' Joey Wendle (18) celebrates with teammates after a baseball game against the New York Mets Monday, Sept. 21, 2020, in New York. The Rays won 2-1.

NEW YORK (AP) — The Tampa Bay Rays are ready for a party — and mum on the details.

“I’m not saying nothing,” closer Nick Anderson said with a laugh.

Shouldn’t have to wait much longer to see what they have in store.

The Rays can lock up their first division crown since 2010 with a win Tuesday or a loss by the Yankees against Toronto. Tampa Bay leads New York by 4 1/2 games with six days left in the regular season.

“We’re getting closer,” manager Kevin Cash said. “We just have to keep winning. As much momentum as possible.”

The Rays could become the second team to clinch a division title during this pandemic-altered season, after Oakland wrapped up the AL West on Monday night.

“We’ll see what happens with the celebrations,” Anderson said. “I don’t know.”

DeGrom (4-2) pitched seven innings of two-run ball, striking out 14 to match his career high for the second time this season. He allowed four hits and walked two against the AL’s top team, enhancing his bid for a third straight Cy Young Award.

“I thought I threw the ball well,” deGrom said. “Made a couple mistakes and they capitalized on them.”

Lowe walked and scored in the second and launched a leadoff homer in the fourth, driving deGrom’s 92 mph changeup out to center field.

“I was very fortunate he made one mistake and we were able to capitalize,” Lowe said.

Rays teammate Joey Wendle said Lowe’s line drive off deGrom “was one of the more amazing things I’ve seen in my baseball career.” Wendle also had two hits against the right-hander.

Tampa Bay’s 16 strikeouts were one short of a season high.

The Rays used an opener for the third time in eight games after relying on their rotation for most of this season. Peter Fairbanks began with 1 2/3 scoreless innings, Josh Fleming (4-0) allowed a run in three innings as the bulk man and Anderson closed for his sixth save. In total, six pitchers combined on a four-hitter.

DeGrom reached 100 mph while striking out the side on 10 pitches in the first inning, a promising sign after he left his previous start after only two innings because of a right hamstring spasm.

He got a bit wild in the second, and a couple of defensive miscues didn’t help. Lowe walked and scored on Manuel Margot’s sacrifice fly, although Lowe might have been nabbed after a wide turn at third on Wendle’s double if shortstop Amed Rosario hadn’t dropped the relay feed.

Jeff McNeil got New York on the board in the fifth with a bases-loaded infield single that cut the Rays’ lead to 2-1. Fleming got out of the inning one batter later when Davis lined out to right fielder Brett Phillips.

The Mets (24-30) are three games behind Philadelphia for the NL’s final wild card and will finish .500 or worse for the third time in four years.

DeGrom faces a crowded field pursuing his third consecutive NL Cy Young Award, with Chicago’s Yu Darvish and Atlanta’s Max Fried likely to be his top competitors. The Mets ace’s ERA rose to 2.14, trailing Fried’s 1.96, but deGrom’s 94 strikeouts lead the group. DeGrom and Darvish are tied for the NL lead with 2.7 Wins Above Replacement (WAR) each, per Fangraphs.

“It’s a short year,” deGrom said. “Everybody knew that coming in. I wish I had more starts.”

The Mets went 12-2 in deGrom’s previous 14 starts, but the run support ran out Monday.

Mets starters have struck out at least 10 batters in three straight games for the first time in franchise history. David Peterson punched out 10 on Saturday, and Rick Porcello matched that Sunday.

Mets: RF Michael Conforto was unavailable with left hamstring tightness. ... OF Jake Marisnick was placed on the 10-day injured list with right hamstring tightness and is done for the season. Marisnick hit .333 in 16 games after being acquired from Houston before the season and is set to become a free agent. OF Guillermo Heredia was promoted from the alternate site.