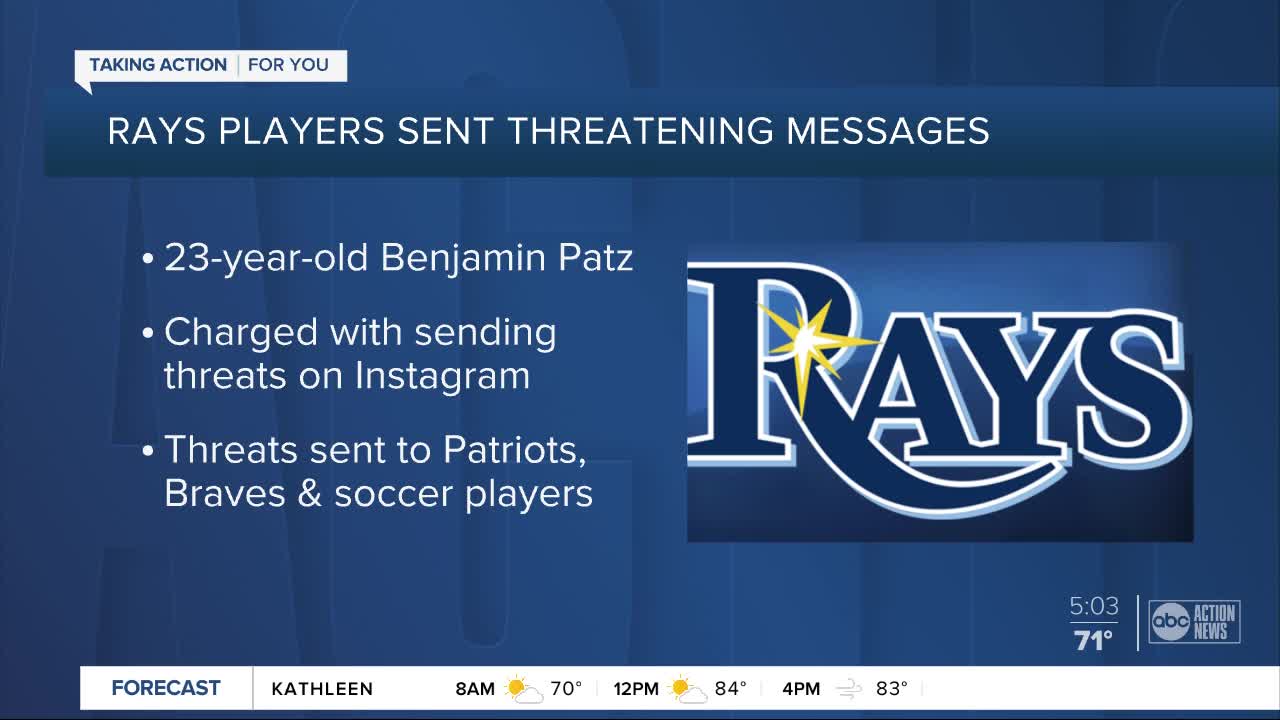 A sports gambler is facing federal charges for threatening social media messages sent to players with the Rays and other teams. Story: https://wfts.tv/3cxXGuF

The U.S. Attorney’s Office in Tampa announced a charge of transmitting threats in interstate or foreign commerce against Benjamin Tucker Patz, 23. He faces up to five years in federal prison.

Patz made numerous violent threats last year against athletes and their family members through anonymous Instagram accounts, according to a criminal complaint. In many messages, Patz threatened to enter the athletes’ homes and behead them or their family members, the FBI said. Some of Patz’s threats also contained derogatory terms and racial slurs, investigators said.

The Tampa Bay Rays lost a home baseball game last July to the Chicago White Sox. An account linked to Patz later sent threatening Instagram messages to four players for the Rays and one player for the White Sox, according to authorities. None of the players were identified by name, only initials.

According to the criminal complaint, Patz made the following threats to the Tampa Bay Rays players:
“I will enter your home while you sleep…And sever your neck open…I will kill your entire family…Everyone you love will soon cease…I will cut up your family…Dismember the[m] alive”;
“Your family’s necks will be severed open with a dull knife!...Your family will die!”;
“Unfortunately 0-5 against the Chicago White Sox isn’t going to cut it. Because of your sins, I will have to behead you and your family”; and
“Your family will be beheaded.”

Patz, who resides in New York and California, goes by the moniker “Parlay Patz.” FBI investigators said they found online articles that claimed he had recently won more than $1 million by wagering on sports events.

Over the past year, Patz has sent threatening messages through social media to numerous professional athletes, investigators said. After losing $10,000 by betting on the Los Angeles Rams to win last year’s Super Bowl, Patz sent messages to two players on the game’s winning team, the New England Patriots, claiming that he would rape and murder their families, the indictment said.

The complaint also lists threats against players for the Atlanta Braves, the San Diego Padres, the Oakland Athletics, the Cleveland Indians, the Baltimore Orioles and the Kansas City Royals. One of Patz’s accounts also threatened a player for the Swedish women’s soccer team after they beat Germany in the Women’s World Cup Quarter-Final, instigators said.

U.S. Attorney’s Office spokeswoman Amy Filjones said Patz was charged in Florida’s Middle District because the Rays players were there when the threats were made. It wasn’t immediately clear if Patz would face charges in other districts for the other threats.

Patz had arranged to turn himself in but wasn’t yet in custody Wednesday evening, Filjones said. It wasn’t known if he had an attorney.

“The safety of our players and staff is paramount and all threats are taken seriously,” Rays spokesman Dave Haller said in a statement. “The Rays and the players involved are cooperating with the FBI as the legal process continues.”