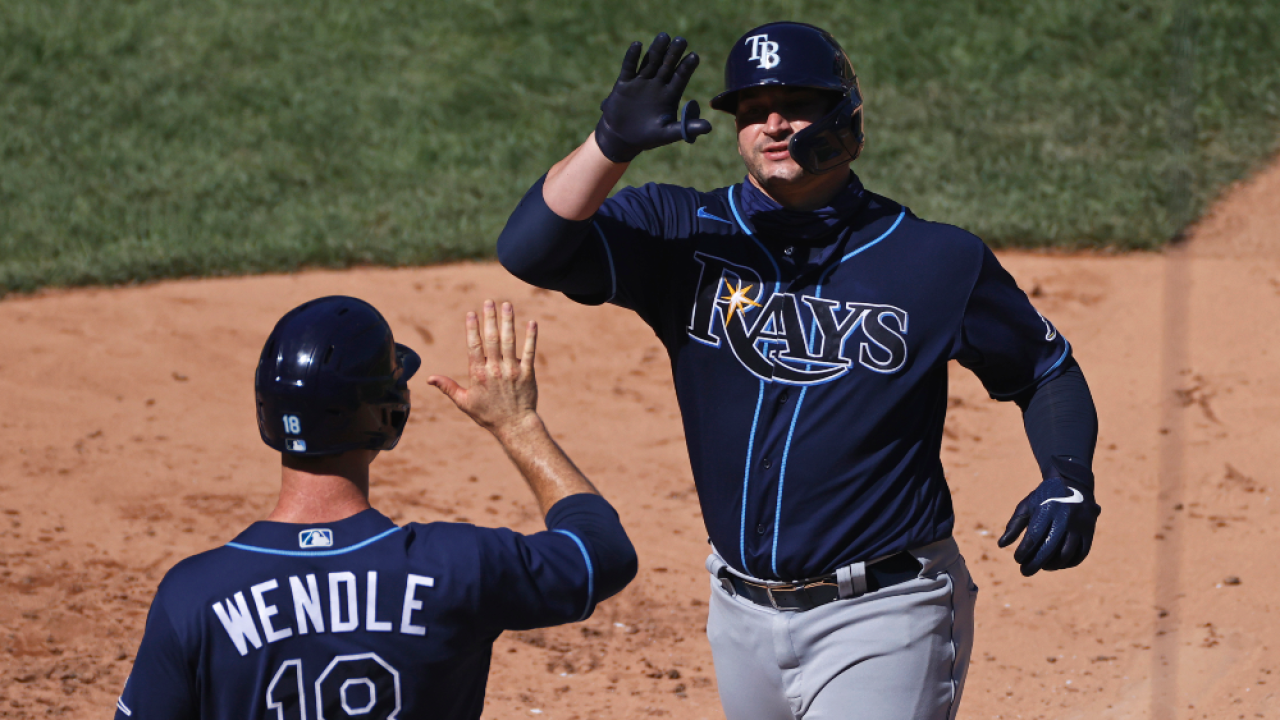 (Copyright 2020 The Associated Press. All rights reserved. This material may not be published, broadcast, rewritten or redistributed.)
AP Photo/Adam Hunger
Tampa Bay Rays' Mike Zunino celebrates hitting a three-run home run with Joey Wendle (18) against the New York Yankees during the sixth inning of a baseball game Thursday, Aug. 20, 2020, in New York.

NEW YORK (AP) — The Tampa Bay Rays completed their first sweep at Yankee Stadium in six years and took over first place in the AL East, getting a three-run homer from Mike Zunino in a 10-5 victory over New York on Thursday.

Tampa Bay beat the Yankees for the sixth time in seven meetings in the abbreviated 10-game season series. The Rays also became the first team to sweep a three-game series at Yankee Stadium since Cleveland on Aug. 28-30, 2017. Tampa Bay previously swept series of three games or more at New York in 2013 and 2014.

The Rays, who lead New York by a half-game in the division, became the fifth team in major league history to sweep a series of at least three games at Fenway Park and Yankee Stadium on the same trip, according to STATS. The 1990 Oakland Athletics were the last team to achieve the feat.

“I’m really impressed with the guys, the way they stayed at it (and) didn’t miss a beat,” Rays manager Kevin Cash said. “No doubt it was a fun, exciting trip but I think everybody’s ready to get home. We’ve been cooped up in a hotel for 10, 11 days.”

Zunino homered to left field off Luis Avilán in the sixth inning to give the Rays an 8-4 lead. His second homer in as many games elicited audible cheers from the Rays dugout in the empty stadium.

One batter earlier, Joey Wendle’s single loudly clanged off the right field wall and scored Manuel Margot, who started the five-run inning with a single off Adam Ottavino (2-2) that just sailed over shortstop Tyler Wade’s glove.

Yandy Díaz padded the lead in the ninth with a two-run homer, drawing more enthusiasm from the Tampa Bay dugout and more inside the clubhouse once the final out was recorded.

“We were excited,” Wendle said. “We just won nine out of 10 on the road. We just swept the Yankees in New York. That’s fun stuff.”

Gio Urshela hit a two-run homer in the fifth off reliever Diego Castillo (2-0). Luke Voit hit his 10th homer two batters into the game move into a tie for the AL lead with Mike Trout.

James Paxton allowed one hit in five innings but ran into trouble in the fifth, when he walked three and threw a wild pitch. Wendle had a two-run double and scored on a sacrifice fly by Mike Brosseau to put the Rays ahead 3-2.

After the game, the Yankees said Paxton is getting an MRI for discomfort in his forearm.

“For Pax right now hoping for the best, that we get good news there and hopefully to continue to work to get him right,” Yankees manager Aaron Boone said.

Gleyber Torres injured his left hamstring running to first base on an RBI groundout in the third and left the game. The Yankees said Torres was getting further evaluation.

“They’ve got our number right now, obviously, so it’s unfortunate,” Ottavino said. “We’re gonna have to find a way to have a little better outcomes against them. We play them three more times and plenty of season left, so I’m not really worried, but definitely a little frustrating to get thoroughly beaten like that.”

Aaron Slegers and Aaron Loup closed out the Yankees with a scoreless inning apiece.

Yankees: LHP Zack Britton (strained left hamstring) was placed on the injured list after getting hurt in Wednesday’s loss. The Yankees recalled RHPs Ben Heller and Miguel Yajure from their alternate site and optioned IF/OF Miguel Andujar to the alternate site. ... C Kyle Higashioka (strained right oblique) has resumed swinging a bat and is not feeling discomfort.

Yankees: Friday’s game at Citi Field against the crosstown Mets was postponed because of two positive tests for the coronavirus in the Mets organization. J.A. Happ (1-1, 6.39 ERA) had been scheduled to start for the Yankees.