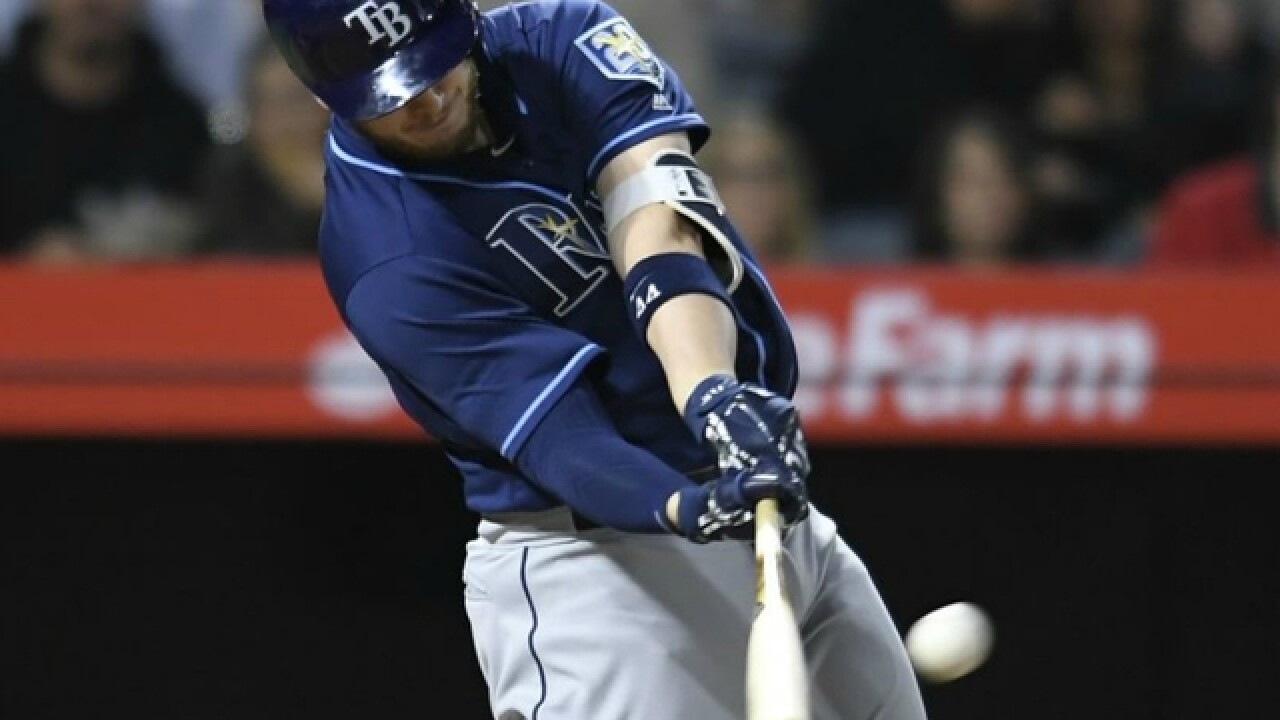 Image copyright 2018 Getty Images. All rights reserved. This material may not be published, broadcast, rewritten, or redistributed.
John McCoy/Getty Images
<p>ANAHEIM, CA: C.J. Cron of the Tampa Bay Rays hits a home run in the sixth inning against the Los Angeles Angels of Anaheim at Angel Stadium on May 17, 2018 in Anaheim, California.</p>

ANAHEIM, Calif. (AP) -- C.J. Cron and Tyler Skaggs became fast friends while spending years together with the Los Angeles Angels. They chirped at each other through texts before Cron arrived at Angel Stadium for his first visit since joining the Tampa Bay Rays.

Cron got the last word in the sweetest way possible when he rounded the bases after clubbing an important homer off Skaggs himself.

Cron homered and scored two runs against his former teammates, and Chris Archer pitched two-hit ball into the seventh inning of the Rays' 7-1 victory on Thursday night.

Skaggs (3-3) took the hard-luck loss despite limiting Tampa Bay to six hits and one run over six innings while striking out seven -- including Cron in his first two at-bats. Skaggs kept the game scoreless until that solo shot into the bullpens by his old buddy.

"It's frustrating, especially to a guy that's one of my really good friends," Skaggs said with a grimace. "We had a few smiles in that first at-bat. But I've seen that for four or five years. He just needed consistent at-bats. He's off to a really good start, so I'm happy for him. It's just frustrating for me."

Cron extended his impressive start for Tampa Bay by homering in his third consecutive game. While getting the regular playing time he so often lacked with the Angels, Cron has reached base in a career-best 23 straight games.

The slugger was the Angels' first-round draft pick in 2011, and he spent the past four seasons in Los Angeles' lineup. Cron was traded last February after Shohei Ohtani's arrival eliminated much of his job as a designated hitter and first baseman.

"I'd be lying if I didn't say it was a little bit different," said Cron, who also singled and stole his first base of the season in the seventh inning. "It's cool to come back to where it all started. It's good to see all of the guys again. Those are some of my best friends over there."

Denard Span hit a two-run homer during the Rays' four-run seventh inning, and Johnny Field added a two-run shot in the eighth as the Rays pushed their longest winning streak of the season to four games.

Archer (3-3) repeatedly struggled with his control while walking four and hitting Justin Upton with a pitch, yet he limited Los Angeles' potent lineup to two singles while earning his first victory since April 26.

Ohtani hit his sixth homer in the ninth inning for the Angels, who have lost five of eight on their 11-game homestand. Ohtani ended a personal 0-for-8 slump and 21 consecutive scoreless innings for the Angels, but it was far too late.

"I had more bad at-bats than good at-bats," said Ohtani, who has a hit in 17 of his 20 starts as a designated hitter. "That's something I have to use as a learning experience."

Mike Trout extended the longest hitting drought of his career to 0 for 19 with four hitless at-bats. He struck out twice while surpassing an 0-for-17 stretch in August 2017 for the longest drought of the two-time AL MVP's career.

"My timing is just a little off," Trout said. "My last at-bat felt better, so I'll just build off that."

Although he has seven walks during his slump, Trout's struggles are part of an overall offensive lull for the Angels, who have scored just six runs in the last four games.

Christian Arroyo had two singles in his debut for Tampa Bay. The touted 22-year-old prospect and Tampa native was the key return in the trade that sent Evan Longoria to San Francisco last winter.

Upton left the game in the sixth inning after Archer's pitch hit him on the left hand, but initial X-rays showed no broken bones. Upton has been the Angels' best hitter in May with seven homers and a majors-best 21 RBIs.

Andrelton Simmons reached base in his 24th consecutive game since April 19, extending the longest streak of his career with a fourth-inning single.

Rays: Adeiny Hechavarria left after grabbing his right hamstring while running to first base with the Rays' first hit in the second inning. Joey Wendle replaced him. Hechavarria will be re-evaluated Friday.

Angels: Reliever Keynan Middleton will have Tommy John surgery, dealing another big blow to a perennially injury-plagued pitching staff. Middleton earned six saves and established himself as LA's closer in May, but left his last appearance after just 12 pitches last weekend.

Rays: Blake Snell (4-3, 3.12 ERA) struggled in Baltimore last Sunday, allowing three homers. He lost his only previous start against the Angels in 2016.