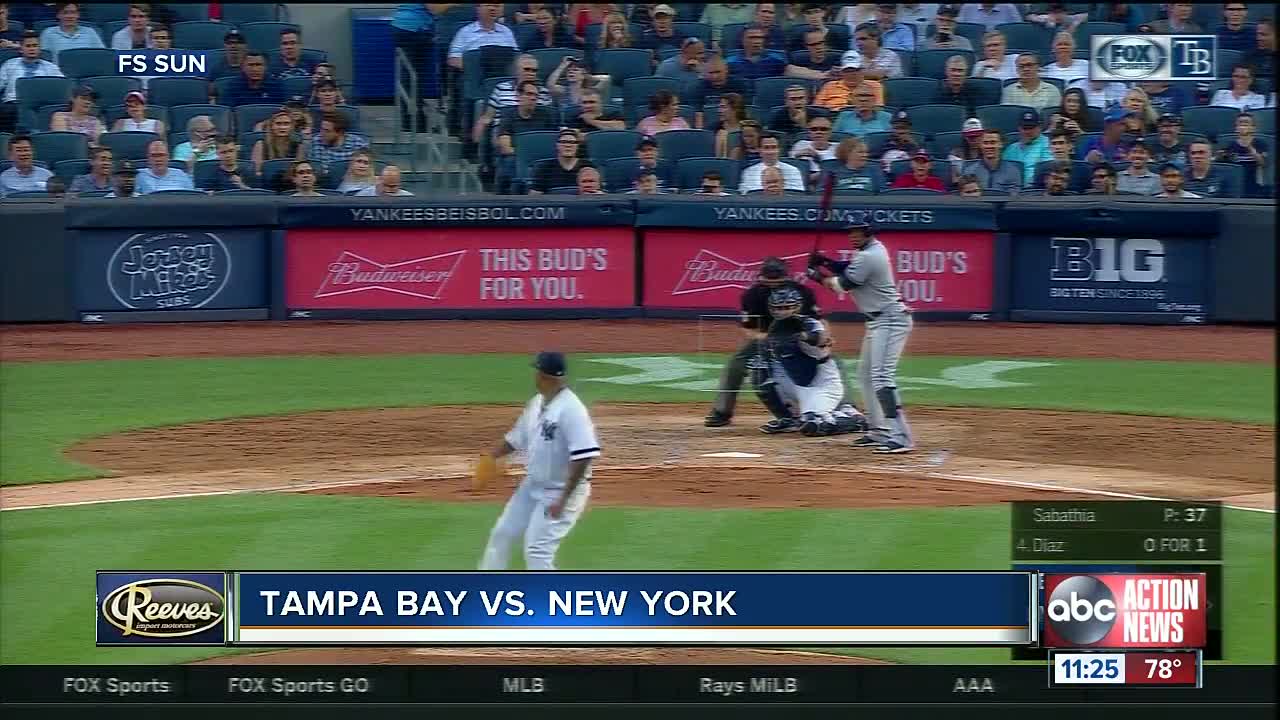 Didi Gregorius went up a few weight classes to restrain CC Sabathia, then climbed up the ladder for a slump-busting grand slam. In between, Aaron Judge delivered perhaps his most memorable moment during an injury-shortened season. Judge hit a go-ahead, two-run homer in the eighth inning, Gregorius followed with his slam and the New York Yankees beat Tampa Bay 8-3 Tuesday night after another surly clash between Sabathia and the Rays. 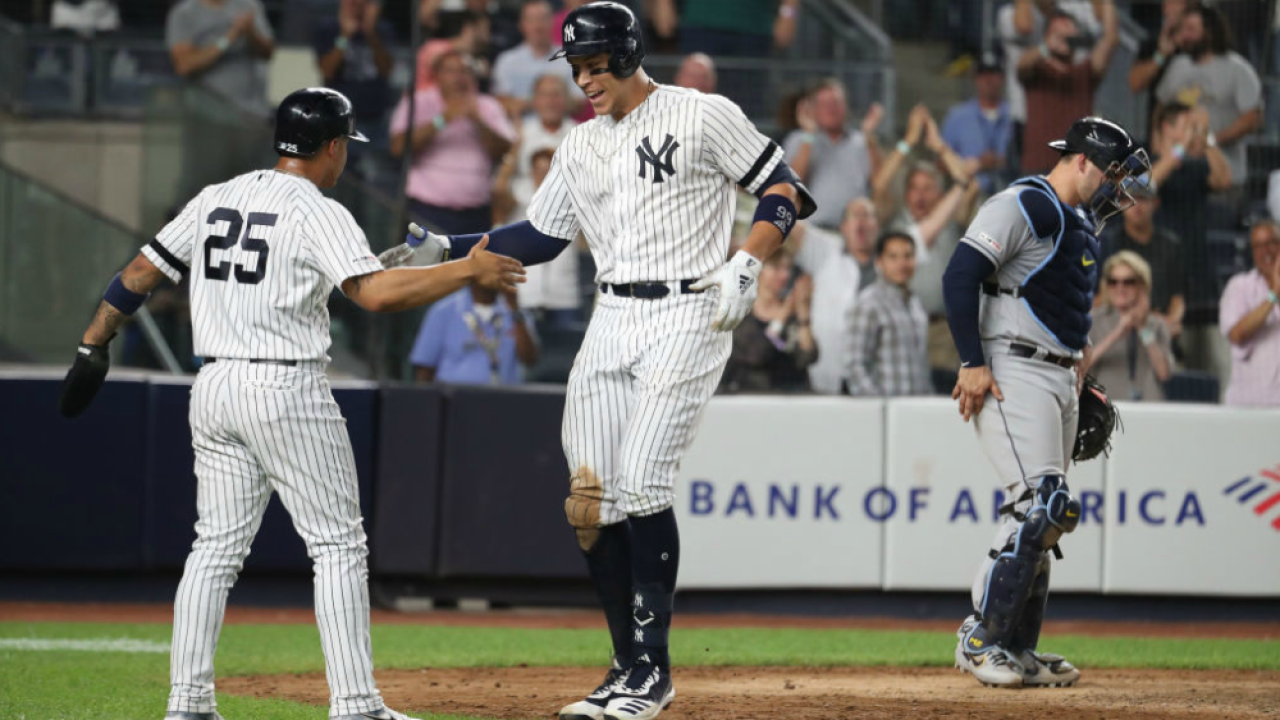 NEW YORK (AP) — Didi Gregorius went up a few weight classes to restrain CC Sabathia, then climbed up the ladder for a slump-busting grand slam.

In between, Aaron Judge delivered perhaps his most memorable moment during an injury-shortened season.

Judge hit a go-ahead, two-run homer in the eighth inning, Gregorius followed with his slam and the New York Yankees beat Tampa Bay 8-3 Tuesday night after another surly clash between Sabathia and the Rays.

A pitch after slicing a would-be homer foul by about two feet, Judge smashed a 3-2 pitch from left-hander Colin Poche (2-3) into the right-center field seats to make it 4-3.

“Tried to get ready a little sooner” after the foul ball, Judge said. “He’s got a good fastball that a lot of guys were fouling off, throwing up in the zone. Just tried to find one down in the zone I could grab.”

Gregorius took a curtain call after hitting a slam later in the inning that ended a 1-for-23 skid. He crushed a fastball that was 4.02 feet off the ground, the highest pitch hit for a homer in the majors this season, per Statcast. It was Gregorius’ fifth homer since returning last month from Tommy John surgery.

“Finally was able to come through,” he said. “Especially against a lefty, that makes it even better.”

Yandy Díaz hit a solo homer and an RBI double, and All-Star Austin Meadows delivered his 14th homer for the Rays.

Benches cleared during the sixth inning amid a shouting match between Sabathia and Avisaíl García. After Sabathia struck out García looking to strand two runners, the 38-year-old barked and pointed at García. Sabathia was held back by Gregorius and never got close to García while both benches and bullpens emptied. No punches were thrown.

Sabathia said he wasn’t shouting at García initially, and García still wasn’t sure what had happened after the game.

“Honestly, I think just a misunderstanding,” Sabathia said. “I wasn’t talking to him. He looked up at me and said something, and it was on.

“I was just yelling out, kind of pumping myself up. He might have took offense to it. It is what it is. I’m never going to back down.”

Sabathia didn’t realize Gregorius — listed at 205 pounds compared to Sabathia’s 300 — was the one who corralled him back into the dugout.

Sabathia was ejected for plunking the Rays’ Jesus Sucre during his last regular-season start in 2018 and has had a few salty run-ins with Tampa Bay this season, including when he threw at Meadows three times and shouted insults during a game in May.

Sabathia allowed three runs in six innings and struck out six. He has a 2.63 ERA in eight starts against the Rays over the past two seasons.

Left fielder Brett Gardner robbed García of a likely homer with a leaping grab against the wall in the fourth inning. García threw down his helmet in frustration.

David Hale (3-0) pitched two scoreless innings for New York, starting with an inning-ending double play with the bases loaded in the seventh against Travis d’Arnaud.

D’Arnaud led off for Tampa Bay and played first base a night after hitting three homers, including a go-ahead shot in the ninth inning. D’Arnaud was 0 for 4 Tuesday.

Jalen Beeks followed opener Ryne Stanek and pitched 3 1/3 innings of one-run ball for Tampa Bay. He struck out four straight and five overall after being called up from Triple-A Durham.

“We played a really good game,” manager Kevin Cash said. “We came up short a little bit. I know the game got separated with Didi’s grand slam, but we competed really, really well.”

Poche said his fastball command was off and he mostly regretted walking Gleyber Torres to start the inning.

“With that lineup, you’re going to give up home runs,” he said. “And you really just want to keep guys off base.”

Rays: OF Guillermo Heredia was optioned to Triple-A Durham to make space for Beeks. Cash said optioning Heredia was the “toughest send-down we’ve had all season,” but the club needed a fresh arm. ... All-Star 2B Brandon Lowe (bruised shin) is running and receiving treatment in Tampa Bay but hasn’t resumed baseball activities after being injured over the weekend. Cash is unsure if Lowe will be ready to play this weekend.

Yankees: 3B Gio Urshela was out of the starting lineup to rest. Urshela pinch ran for Luke Voit in the eighth. ... OF Cameron Maybin (left calf) is hitting in a cage and doing agility drills. He’s nearing a minor league rehab assignment, but a date hasn’t been determined yet.

Rays RHP Yonny Chirinos (8-4, 3.11) will face Yankees RHP Domingo Germán (11-2, 3.40) in the third game of the four-game set. Chirinos had a career-high eight strikeouts in his previous outing against Baltimore and has made seven straight quality starts. Germán is 2-0 with an 0.75 ERA in two starts since returning from the injured list.