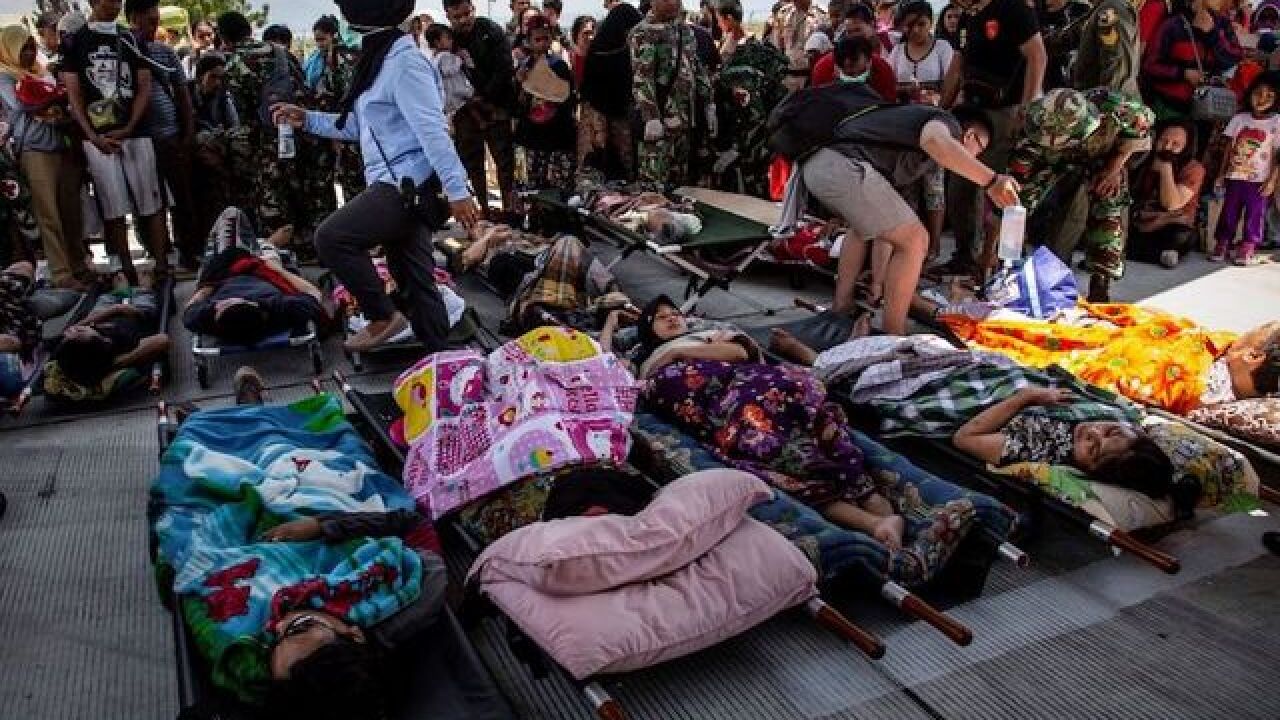 Image copyright 2018 Getty Images. All rights reserved. This material may not be published, broadcast, rewritten, or redistributed.
Ulet Ifansasti
<p>The injured lie on the ground as they wait to be transported via the airport in Palu which has re-opened after an earthquake triggered a tsunami in the area on October 1, 2018 in Palu, Indonesia. Over 840 people have been confirmed dead after a tsunami triggered by a magnitude 7.5 earthquake slammed into Indonesia's coastline on the island of Sulawesi, causing thousands of homes to collapse, along with hospitals, hotels and shopping centers. </p>

Mass graves were dug Monday as Indonesian authorities rushed to bury hundreds of people killed by an earthquake and tsunami that cracked streets, tore down buildings and washed away homes on the island of Sulawesi.

Three days after the disaster, the streets of the provincial capital Palu were still covered in debris and bodies thrown about by a magnitude 7.5 earthquake that triggered tsunami waves up to three-meters-high (10 feet).

Authorities raised the toll again Monday to 844 dead, and warned that more bodies were likely to be found as heavy equipment moved in to clear the rubble.

Conditions in the devastated area are grim.

Food and supplies were running low. As they waited for aid Sunday, survivors took matters into their own hands, entering shops and wheeling away trolleys filled with food and water. At a gas station Monday, a CNN crew saw people opening up a tank from under the ground and using ladles to scoop up fuel.

Hundreds rushed to the airport hoping to catch one of the few flights out of the area. One man told CNN Monday he had been waiting there two days. A woman said she feared for her and her baby's safety due as residents raided shops for food and water.

In total, an estimated 2.4 million people were affected by the disaster, Indonesian Disaster Management Agency spokesman Sutopo Purwo Nugroho said. Some 600 people were hospitalized and more than 48,000 have been displaced.

In the chaos after the quake, more than 1,000 inmates from five prisons had fled, according to CNN Indonesia. Authorities have urged them to return within one week.

The earthquakes were just the start of the horror for residents of Palu and surrounding areas. The largest tremor triggered a tsunami that sent waves of "about three meters high" to the beaches of Palu and Donggala.

Homes, business and vehicles along the coast were washed away by the violent waves. Roads and bridges were destroyed.

Mia, 40, was at the Ramayana shopping mall in Palu with her daughters when the ground started shaking.

"I just finished my shopping and went to the cashier, suddenly everything got dark and the walls started falling around us, it was horrible," said Mia, who like many Indonesians only goes by one name. She said she ran down a broken escalator with her daughters. They made it out alive, but not all were so lucky.

Across the region, first responders are continuing to dig through the rubble, sometimes by hand, in the hopes of finding survivors who were trapped by the massive quake or the destructive tsunami that followed.

In the residential area of Patobo, there are fears that many could have been killed when 744 homes were buried in mud, Nugroho said Monday.

In Palu, workers scrambled to rescue about 50 people trapped beneath the debris of the Roa Roa hotel.

Aerial images showed the eight-floor building completely collapsed, and video posted by Nugroho to Twitter showed orange-clad responders carrying an individual on a stretcher through the rubble.

One of the guests at the hotel was a 39-year-old South Korean national, according to the South Korean embassy in Indonesia. The man had been in the region for a paragliding competition.

At least five foreigners, including three French nationals as well as a Malaysian and the South Korean national, are unaccounted for, Nugroho said. The Indonesian government has evacuated 114 foreign nationals.

As of Sunday, there were no reports of US citizens affected by the quake, the US Embassy in Jakarta told CNN.

Disaster officials say the inability to access the worst-affected areas has hampered their efforts, as they were unable to quickly deliver aid and heavy machinery used to rescue survivors. The Mutiara Sis Al Jufri Airport in Palu was closed for 24 hours after the tsunami but has since reopened to limited flights.

Aid has trickled into the city of Palu, but first responders have only recently reached the Donggala regency, home to more than 300,000 people. They were closest to the epicenter of the largest, magnitude 7.5 earthquake that struck Friday, before the tsunami washed into the long, narrow bay, past the town of Donggala and into Palu.

"The Indonesian Red Cross is racing to help survivors, but we don't know what they'll find there," said Jan Gelfand, who heads the International Red Cross delegation in Indonesia Sunday. "I don't think we've quite seen the worst of things yet."

Priority will be given to evacuating survivors and allowing aid workers to bring in food and fresh water, said Indonesian President Joko Widodo, who visited the disaster site on Sunday.

Widodo has authorized the country to request international aid relief.

The European Union and South Korea have offered $1.7 million and $1 million respectively, while the Australian government has said it's working with Indonesia to identify options for assistance.

Bambang Soesatyo, speaker of the People's Representative Council and a member of Golkar Party, told reporters Sunday the government needs to increase the scale of relief operations in the affected area.

Many people had to sleep on the side of the road and patients were treated in open spaces. Residents are still worried about aftershocks and are afraid to return home, said Soesatyo.

Hundreds of families are already mourning the loss of their loved ones, including an air traffic controller who's been hailed as a hero.

Anthonius Gunawan Agung, 21, died in the hospital after he jumped off the traffic control tower at the Palu airport when he thought the tower was collapsing.

He stayed behind to make sure a passenger airplane safely took off, according to AirNav Indonesia, the agency that oversees aircraft navigation.

The current and former mayor of Palu are also among the dead, according to the the Red Cross.

An early tsunami warning had been issued by the Indonesian meteorological agency, but was later lifted after the agency ascertained that the water had receded.

The quakes come weeks after a trio of earthquakes hit several islands in the South Pacific and Indonesia, including Lombok, which is still recovering from the effects of an August 5 earthquake that killed more than 430 people.