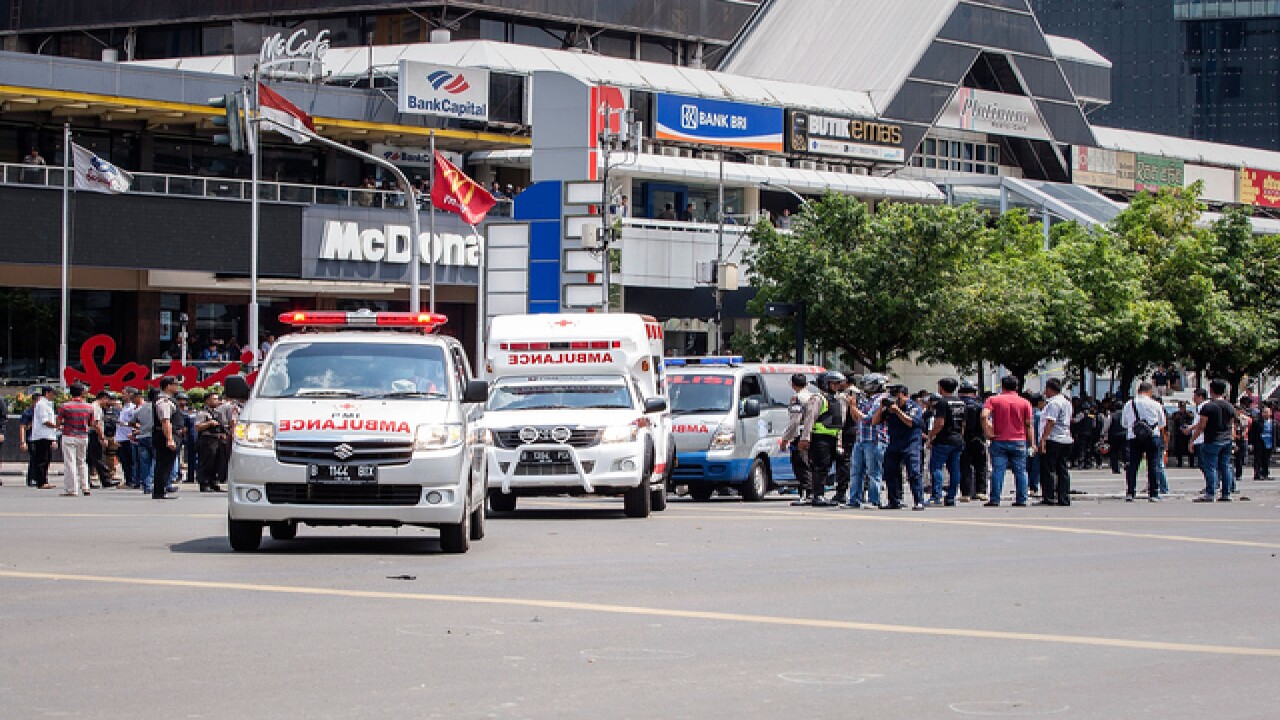 Attackers set off explosions at a Starbucks cafe in a bustling shopping area in Indonesia's capital and waged gunbattles with police Thursday, leaving bodies in the streets as office workers watched in terror from high-rise buildings.

Police said five attackers and two civilians were killed, while 10 people were injured in the brazen attacks, which followed several warnings in recent weeks by police that Islamic militants were planning something big. It was unclear if any perpetrators remained at large.

Five hours after the major downtown street in Jakarta — not far from the presidential palace and the U.S. Embassy — turned into a battleground, police declared the area near the Sarinah shopping mall secure.

"We believe there are no more attackers around Sarinah. We have taken control," Jakarta police spokesman Col. Muhammad Iqbal said.

Gen. Anton Charilyan, a national police spokesman, said the attack involved an unknown number of assailants with grenades and guns. He said they imitated the recent "terror acts" in Paris and were likely from the Islamic State group, but gave no evidence.

It was the first major attack in Indonesia's capital since the 2009 bombings of two hotels that killed seven people and injured more than 50. Before that, bombings at nightclubs on the resort island of Bali in 2002 killed 202 people, mostly foreigners.

No one claimed responsibility for Thursday's attack on Thamrin Street, which prompted a security lockdown in central Jakarta and enhanced checks all over the crowded city of 10 million.

Charilyan said police had received information in late November about a warning from the Islamic State group that "there will be a concert" in Indonesia, meaning an attack.

"This act is clearly aimed at disturbing public order and spreading terror among people," President Joko "Jokowi" Widodo, said in a statement on television. Jokowi, who was in the West Java town of Cirebon, said he was returning to Jakarta immediately.

"The state, the nation and the people should not be afraid of, and be defeated by, such terror acts," he said.

Tri Seranto, a bank security guard, told The Associated Press he saw at least five attackers, including three who triggered explosions at the Starbucks. It was not immediately clear if they exploded bombs or grenades.

Tri described them as suicide bombers, but police spokesman Charilyan denied they blew themselves up.

He said the two dead civilians were a Dutch citizen and an Indonesian. An Algerian man was among the 10 injured, he said.

But there was some confusion about the Dutch citizen's status. A Dutch Foreign Minister spokeswoman in the Netherlands said he was seriously injured and was undergoing surgery.

After the explosions at Starbucks, a gunbattle broke out between the attackers and anti-terror police squads, and gunfire could be heard more than 1½ hours later.

Witnesses saw at least three bodies sprawled on the sidewalk after the fighting ended.

The area has many luxury hotels, and offices in high-rise buildings and embassies, including the French.

Tweets from the account of Jeremy Douglas, regional representative of the United Nations Office on Drugs and Crime for Southeast Asia and the Pacific, described a bomb and "serious" exchanges of gunfire on the street outside his Jakarta office. "Didn't experience this in 3.5 years in #Pakistan," he wrote.

The country has been on high alert after authorities said they foiled a plot by Islamic militants to attack government officials, foreigners and others. About 150,000 police officers and soldiers were deployed on New Year's Eve to guard churches, airports and other public places.

More than 9,000 police were also deployed in Bali.

On Tuesday, jailed radical Islamic cleric Abu Bakar Bashir appealed to a court to have his conviction for funding a terror training camp overturned, arguing that his support for the camp was an act of worship.

The 77-year-old leader of the Jemaah Islamiyah militant network filed a judicial review of his 2011 conviction, when he was sentenced to 15 years in jail for setting up the camp in Aceh province. A higher court later cut the sentence to nine years.

Indonesia, the world's most populous Muslim nation, has suffered a spate of deadly attacks blamed on the Jemaah Islamiyah network in the past. But militant strikes in recent years have been smaller and less deadly, and have targeted government authorities, mainly police and anti-terrorism forces.