Tuesday's $1.6 billion Mega Millions jackpot was the largest in U.S. lottery history and one lucky person or group of people in South Carolina won it.

TAMPA, Fla. — Tuesday's $1.537 billion Mega Millions jackpot was the largest in Mega Millions history and one lucky person or group of people in South Carolina won it. The cash value of the winning ticket is $878 million.

Mega Millions confirmed Wednesday that the jackpot was $1.537 billion, just short of the record for all lotteries and less than the originally reported $1.6 billion jackpot.

One lucky person or group of people in South Carolina matched all six numbers to win Tuesday's jackpot, according to the South Carolina Education Lottery website. Many across the nation are now eagerly waiting to find out who the winner is, but they may never know because South Carolina allows lottery winners to remain anonymous.

“The moment we’ve been waiting for finally arrived, and we couldn’t be more excited,” said Gordon Medenica, Lead Director of the Mega Millions Group and Director of Maryland Lottery and Gaming. “This is truly a historic occasion. We’re so happy for the winner, and we know the South Carolina Education Lottery can’t wait to meet the lucky ticket holder.”

While the jackpot ticket wasn't sold in Florida, four tickets worth at least $1 million were.

Three $1 million tickets were sold at:

A winning $3 million ticket was sold at:

Below is the chart from the Florida Lottery website showing the breakdown of winners in Florida: 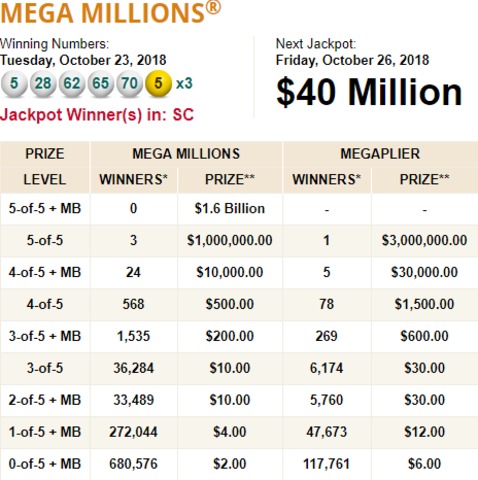 Here are the number of winners across the nation, per the Mega Millions website: 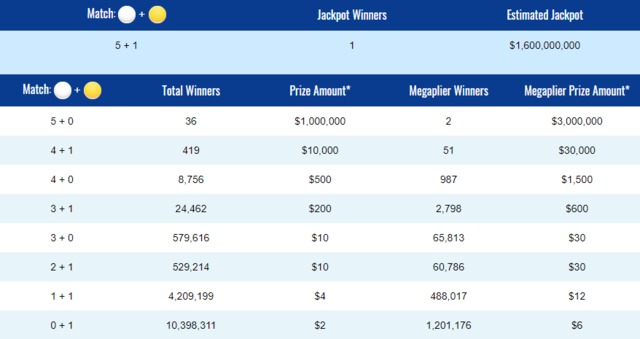 Only one other jackpot in U.S. history has surpassed the $1 billion mark. The jackpot previously held the title of all-time largest lottery jackpot in American history. The $1.586.4 billion Powerball jackpot on January 13, 2016, had three winning tickets, sold to residents in California, Florida and Tennessee.

There are a total of nine ways to win a prize in Mega Millions, ranging from the jackpot down to $2: