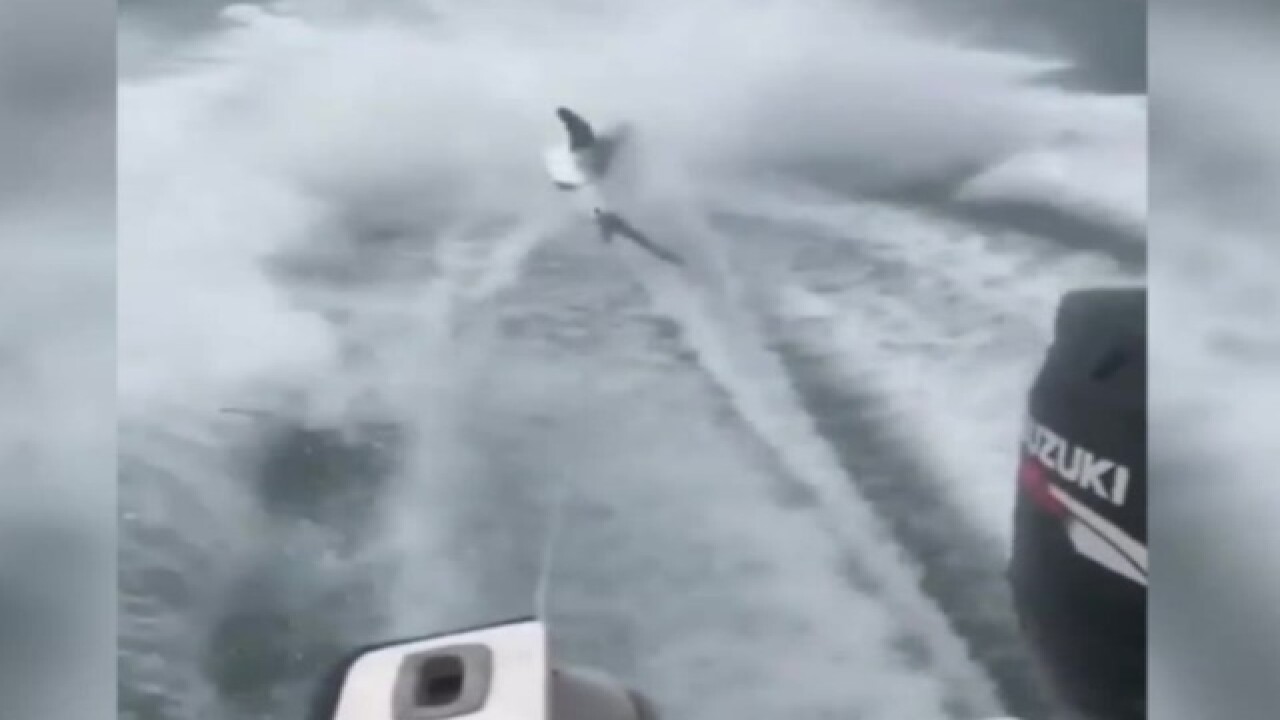 Wildlife officers with the Florida Fish and Wildlife Conservation Commission are investigating a viral video that shows a shark being dragged behind a boat at a high rate of speed.

The FWC tells ABC Action News they believe the video was recorded on the West coast of Florida.

The FWC released a statement on Wednesday morning regarding the incident:

"The FWC was alerted to a video by a web tip on July 24 which is circulating on multiple social media sites showing a group of individuals traveling at high speed on the water dragging a shark behind the vessel.

The FWC takes this very seriously and is currently investigating this incident. The FWC has identified the individuals in the video, and would like to thank the public for their assistance. Per normal protocol, while this investigation is ongoing, the agency will not be confirming the identities of the individuals involved.

Anyone with additional information about this incident is asked to contact the FWC’s Wildlife Alert Hotline at 888-404-3922 or Tip@MyFWC.com. Individuals can remain anonymous.

It is too early to speculate as to what, if any, violations took place in this incident. However, the FWC would like to state that that the lack of respect shown in this video for our precious natural resources is disheartening and disturbing, and is not representative of conservation-minded anglers around the world."

Wildlife officers with the Fish and Wildlife Conservation Commission are investigating a viral video that shows a shark being dragged behind a boat at a high rate of speed.

The FWC tells ABC Action News they believe the video was recorded on the West coast of Florida.

However, investigators won't say much more about the video that's been seen on several social media sites including Facebook and Instagram.

A popular south Florida fisherman tells ABC Action News, the man behind the wheel of the boat, Michael Wenzel, sent him the now infamous video Monday, as well as a picture of the aftermath that shows a shark torn to pieces.

"I've never seen a more horrific video as far as an animal is concerned in fifty years of shark fishing," said Mark "The Shark" Quartiano.

Quartiano says Wenzel messaged him the video looking to earn his praise, but the longtime shark hunter quickly responded with disgust.

"This is no way to treat a helpless, innocent animal," said Quartiano. "And then he called me a "hater" and that's when I posted the video to my Instagram to see what kind of feedback I would get."

Within 24 hours, the video had been viewed more than 45,000 times on Quartiano's Instagram page alone.

Wenzel blocked his Instagram page Tuesday. One previous post showed him holding a large, white pelican by its beak.

"I was very saddened by it and hurt just because I know him and it was hard to see someone that I know do something like that, especially to marine wildlife," said Sydney Thomas, who went to school with Wenzel.

E. Jon Weiffenbach, an attorney said to be representing all the men on the boat, told ABC Action News, "None of the individuals in the video have been charged criminally and no one has been arrested."

Dylan Hubbard with Hubbards Marina in Madeira Beach says he has public shark fishing charters and he believes mainly in catching and releasing them.

Hubbard said the shark looked like its still alive because dead sharks are stiff.

"What they did to this shark is unethical," he said, "it was being dragged to a slow drowning death."

We asked FWC officials if this way of pulling a shark is legal -- but they say it is a gray area when it comes to the law and would not say more.

Officers are asking for anyone with information on these individuals to contact their wildlife tip line.

You can do so at the FWC’s Wildlife Alert Hotline at 888-404-3922 or Tip@MyFWC.com. Individuals can remain anonymous.