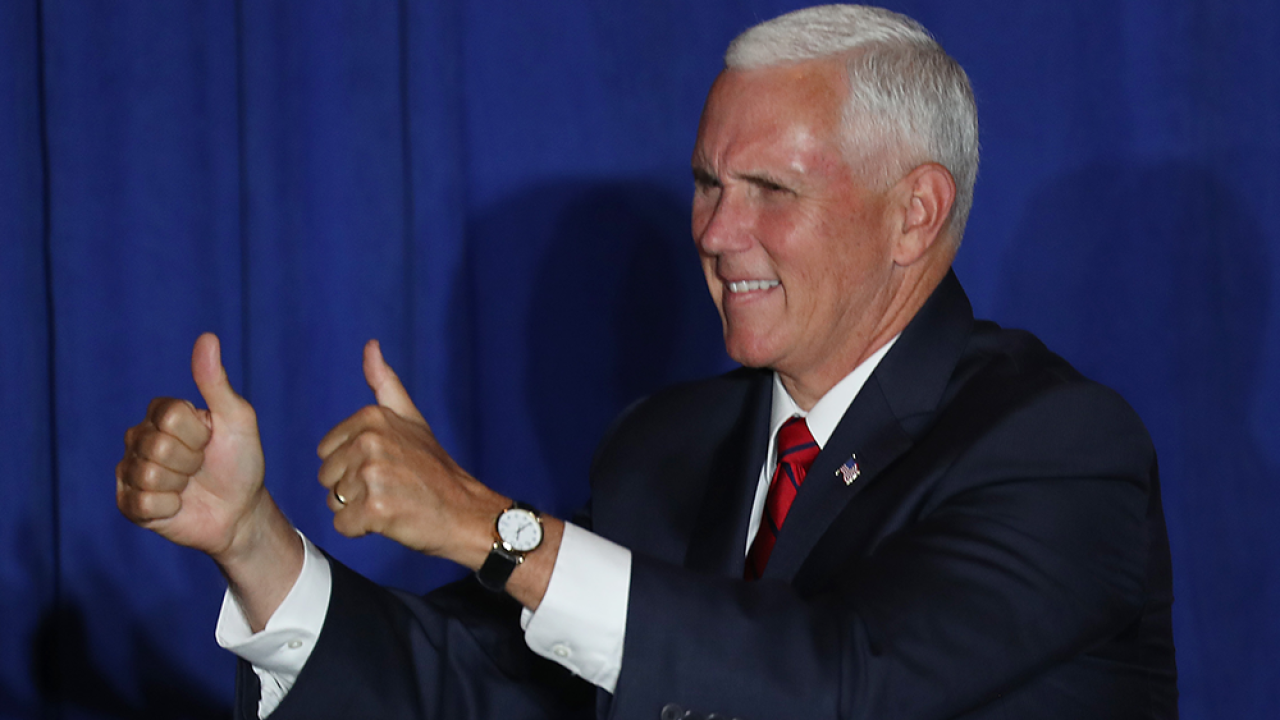 "Tomorrow night, many of (the Democratic Party's) leading candidates, and the night after that, are actually going to openly advocate for an economic system that has impoverished millions," he said at an event aimed at Hispanic voters in Miami.

"Now, Latino Americans know better than most about the cost of socialism. It's impoverished generations and stolen the liberty of millions," he added, a reference to a number of South American countries that have been roiled by socialist governments, most recently Venezuela.

Pence declared: "We must say, as the president said in his State of the Union address, America will never be a socialist country."

Pence's remarks came as part of an event launching the "Latinos for Trump" coalition, an effort to woo Hispanic voters in advance of next November's election. He told the crowd they would be "one of the most important coalitions of the 2020 campaign." The event comes a day ahead of the first Democratic presidential primary debates in Miami, and a week after President Trump held his official campaign kickoff rally in Orlando, signaling Florida's significance to his re-election hopes.

And the vice president used much of his speech to go after Democrats in advance of their first presidential primary debates this week in Miami. He said at the debates over the next two days, Democrats would "promise more taxes, more regulations" and policies like Medicare for All and the Green New Deal, which he attacked as ineffective and expensive. He also attacked Democrats on abortion, noting nearly every candidate has advocated for rolling back restrictions on using taxpayer funding for abortion.

But he also made an economic pitch to the crowd, touting the record-low unemployment rates among Hispanics and what he called "a time of unbridled growth and prosperity for Latino Americans." And while the Trump administration has faced sharp criticism from Latino community leaders for its hardline immigration policies, Pence told the crowd that the president was working to secure the border and "fix this broken immigration system," while "it's been the Democrats that have been denying there's a crisis at our border, that have been denying us the resources and reforms to end that crisis."

Florida is home to more than 2 million registered Latino voters, and the Trump campaign believes they have an opening with Latino voters because of the president's economic policies, which they say have contributed to low unemployment rates among Latinos, among other issues. Republicans see an opportunity particularly in South Florida, where the sizable Cuban population tends to lean conservative.

But Trump has also come under fire for his hardline immigration policies and rhetoric toward Latinos, with his policy of separating immigrant children from their parents at the border again coming under scrutiny last week following reports of unsafe living conditions for children being held at detention centers.

In comments to the Miami Herald, Democratic National Committee Chairman Tom Perez argued that Trump's "agenda has been toxic" for the Latino community, hammering Republicans for their efforts to roll back the Affordable Care Act and for their immigration policies.

In November's elections, however, 32 percent of Latinos voted for Republicans, according to AP VoteCast data, a nationwide survey of more than 115,000 midterm voters — including 7,738 Latinos. That was largely consistent with Trump's share of the Latino vote in 2016, despite the president's controversial comments and policies, and a strong performance among Latinos in Florida in particular helped Republicans defeat Democrats in the gubernatorial and Senate races in 2018.