A runaway BMW SUV tore down a Florida interstate for nearly 40 miles Monday, but the motorist managed to keep his cool while authorities made several attempts to stop him, telling a 911 dispatcher calmly "my gas pedal is stuck," according to the Florida Highway Patrol and dramatic recordings.

In a statement a BMW spokesperson called the scenario "implausible" and said there were numerous ways in which the driver could have stopped the car. "We would be happy to work with the Florida State Police to investigate the cause of this incident," the company added.

Gary, of 1-800-ASK-GARY arrested for DUI after speeding past deputy going 100 mph

The driver, Joseph Cooper, was alone in his SUV on I-95 near Vero Beach just before 1 p.m. when he lost control, he told emergency dispatchers. Authorities helped control traffic as he careened as fast as 95 mph with a flashers and a green strobe on.

Asked if he could shift to neutral, he told the dispatcher, "I can't, ma'am, I tried that already. I'm trying to hold onto the wheel and talk to you at the same time."

He told the dispatcher he almost hit someone.

Incredible dashcam footage shows a police officer attempting to slow down a runaway BMW barreling down a Florida interstate at nearly 100 mph. The driver told a 911 dispatcher "my gas pedal is stuck." Miraculously, no one was injured. https://t.co/SzErOkZUMX pic.twitter.com/4YvhQExmVT

"Get out of the way!" he yelled, according to the recording.

Dashcam video released by the Fellsmere Police Department shows an officer deploying spike strips on the interstate in their third and final deployment of strips to try to stop the car. The BMW is seen going over the spike strips which hit the left two tires.

That slowed the car to 40 mph, but Cooper was still unable to stop. "The vehicle was traveling on all 4 rims with no tire," the highway patrol said.

Minutes later, the video shows the SUV coming to a complete stop, and as smoke surrounds the vehicle, the driver got out to talk to authorities. 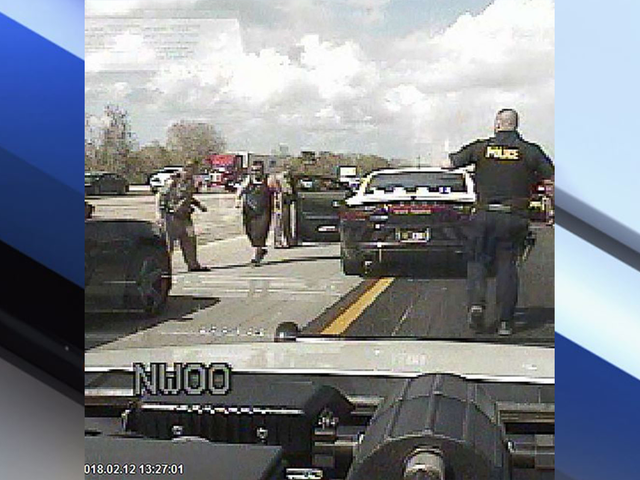 At that point Cooper had traveled more than 40 miles. Miraculously, no one was injured, Lt. Alvaro Feola of the Florida Highway Patrol told ABC News.

Feola said Cooper made the right choices in the dangerous situation.

"He did call 911, he wore a seat belt, he kept the dispatch aware of the mile markers," Feola said.

"Thank God in this situation nobody got hurt," Feola added. "Traffic was maybe a little light, it wasn't rush hour."

The BMW spokesperson said in the statement that "BMW drivers have long been able to rely on integrated safety systems that help ensure safe operation of every BMW vehicle.

"All BMW vehicles, including the 2003 X5 described in this incident, employ an electronic accelerator pedal which uses software logic to override the accelerator whenever the brake pedal is pressed while driving. This fail-safe software means that if the vehicle detects that both pedals are depressed, the on-board electronics will reduce engine power so that the driver may stop safely.

"The vehicle could also have been stopped by two additional means: By placing the transmission in neutral and coasting to a stop and/or by shutting off the ignition without removing the key. This is accomplished by turning the key counterclockwise. The engine would have shut off and the driver could have safely coasted the vehicle to a stop."