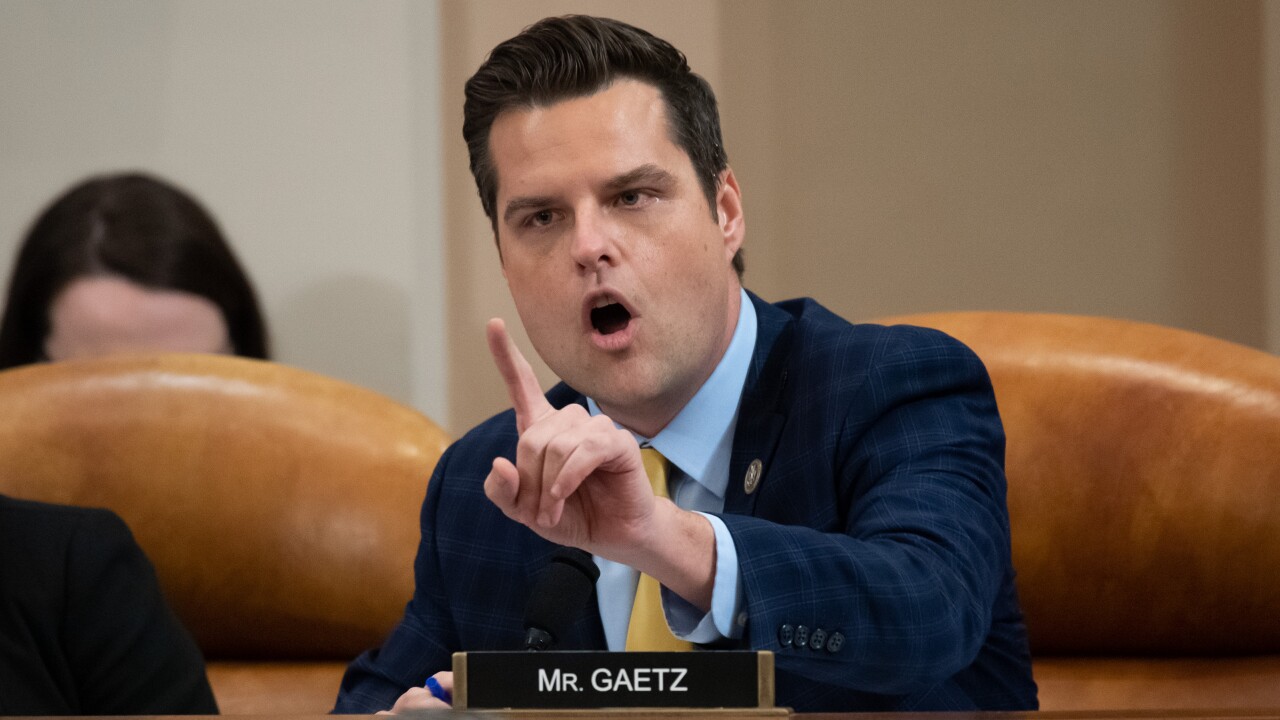 Pool/Getty Images
WASHINGTON, DC – DECEMBER 4: Rep. Matt Gaetz (R-FL) speaks during testimony by constitutional scholars before the House Judiciary Committee in the Longworth House Office Building on Capitol Hill December 4, 2019 in Washington, DC. This is the first hearing held by the Judiciary Committee in the impeachment inquiry against U.S. President Donald Trump, whom House Democrats say held back military aid for Ukraine while demanding it investigate his political rivals. The Judiciary Committee will decide whether to draft official articles of impeachment against President Trump to be voted on by the full House of Representatives. (Photo by Saul Loeb-Pool/Getty Images)

Florida Congressman Matt Gaetz has announced he is filing an ethics complaint against Speaker of the House Nancy Pelosi for destroying President Trump's State of the Union speech Tuesday night.

"Her conduct was beneath the dignity of the House, and a potential violation of law (18 USC 2071). Nobody is above the law. She must be held accountable," the Republican tweeted.

BREAKING: I'm filing an ethics complaint against @SpeakerPelosi for destroying @realDonaldTrump's State of the Union speech.

Her conduct was beneath the dignity of the House, and a potential violation of law (18 USC 2071).

Nobody is above the law. She must be held accountable. pic.twitter.com/dXPPWQNtI8

At the end of President Trump's State of the Union address Tuesday, Pelosi was seen on camera ripping the speech in half. She later called the speech a "manifesto of mistruths."

"It is hard to overlook the symbolism of such a gesture — the sense that Speaker Pelosi was utterly dismissive of the President's achievements, and more importantly, the achievements of the American people," Gaetz said in the complaint. "Speaker Pelosi's gesture was deeply offense, and appears to violate clauses 1 and 2 of House Rule XXIII ("Code of Official Conduct")."

He first announced the complaint on FOX News Wednesday night.

.@SpeakerPelosi ripped the country apart with a sham impeachment and she illustrated it last night by ripping up @realDonaldTrump’s speech.

I’ll be BREAKING news on @IngrahamAngle tonight at 10pm ET.

It's time for us to fight back. As Democrats say, no one is above the law. pic.twitter.com/yz281135Tl