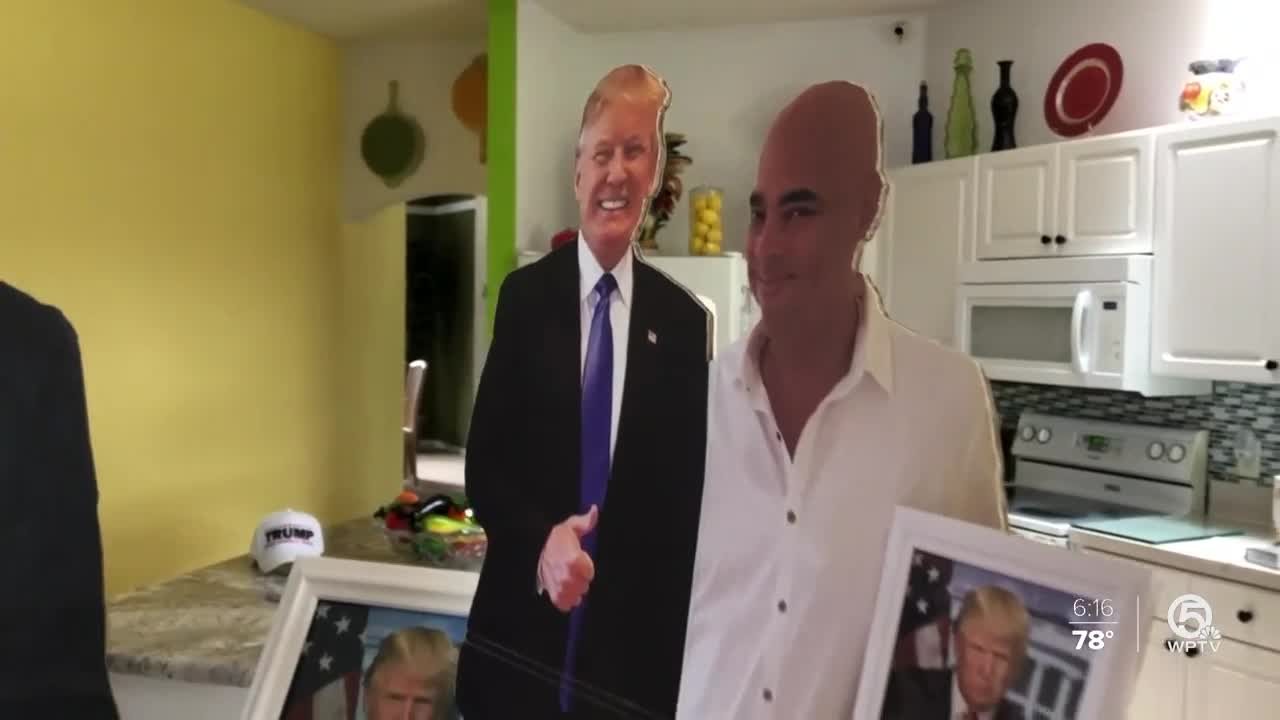 It takes hours, sometimes multiple times a week for a patient to undergo dialysis. So it's not unusual that dialysis patients going to a dialysis center for treatment, bring in something to distract them. One Port Saint Lucie says he wasn't allowed to bring what makes him feel at home.

PORT SAINT LUCIE, Fla. — It takes hours, sometimes multiple times a week for a patient to undergo dialysis. So it's not unusual that patients bring in something to distract them, and one man in Florida says he wasn't allowed to bring what makes him feel at home.

"It's made out of cardboard," said Nelson Gibson. "Giving two thumbs up, plus a big smile."

It's a life-size cutout of President Donald Trump and Gibson can take him anywhere he wants — except for the place where he says he spends hours in dialysis treatment for his kidney failure.

"She said it was too much, this was okay [Nelson shows smaller cutouts], but the other one is too much. She said, 'this is not a rally,' which of course it doesn't show like it's a rally, it's just a picture," said Gibson.

For more than a year, Gibson says he's kept smaller President Trump image by his side during treatment at Fresenius Kidney Care in Port Saint Lucie. He says he's never had an issue.

"What I decided to do was kind of give him some things that can kind of distract his mind to remind him of a sense of home," said Eric Gibson, Nelson's son.

Eric decided to go larger than life and get his dad the life-size cutout. On Saturday Nelson brought it in the kidney care center for the first time and says it was a hit, but on Tuesday, the cardboard president was turned away.

"I just feel that he's done so much for kidneys and dialysis. I just feel very grateful for what he's doing," said Gibson.

He says he doesn't want to return to the care center until he has a discussion with staff on why he couldn't bring the cutout in.

Last year President Trump signed an executive order that included encouraging in-home dialysis. Gibson and his family said they've considered it, but it's not that simple.

"He feels that he wants the sanctity and knowledge of a true medical professional rather than having myself or another relative oversee his health," said Eric Gibson.

Gibson said other patients at the center sing while getting dialysis, others pop bubble wrap — everyone has something that works for them. He says his cardboard cutout was put up against a wall and was not in the way.

A spokesperson for Fresenius Kidney Care in Port Saint Lucie released this statement in response to our inquiry of the situation:

"While we cannot discuss any specific individual, we strongly support the ability of all our patients to express their views, which includes bringing reasonably sized items into our dialysis centers that do not create safety or infection control issues, or interfere with caregivers on the treatment floor," said Brad Puffer, spokesperson for Fresenius Kidney Care.

This story was originality published by Michelle Quesada for WPTV