First Democratic Debate in Florida: What to watch for and what 2020 candidates will take the stage 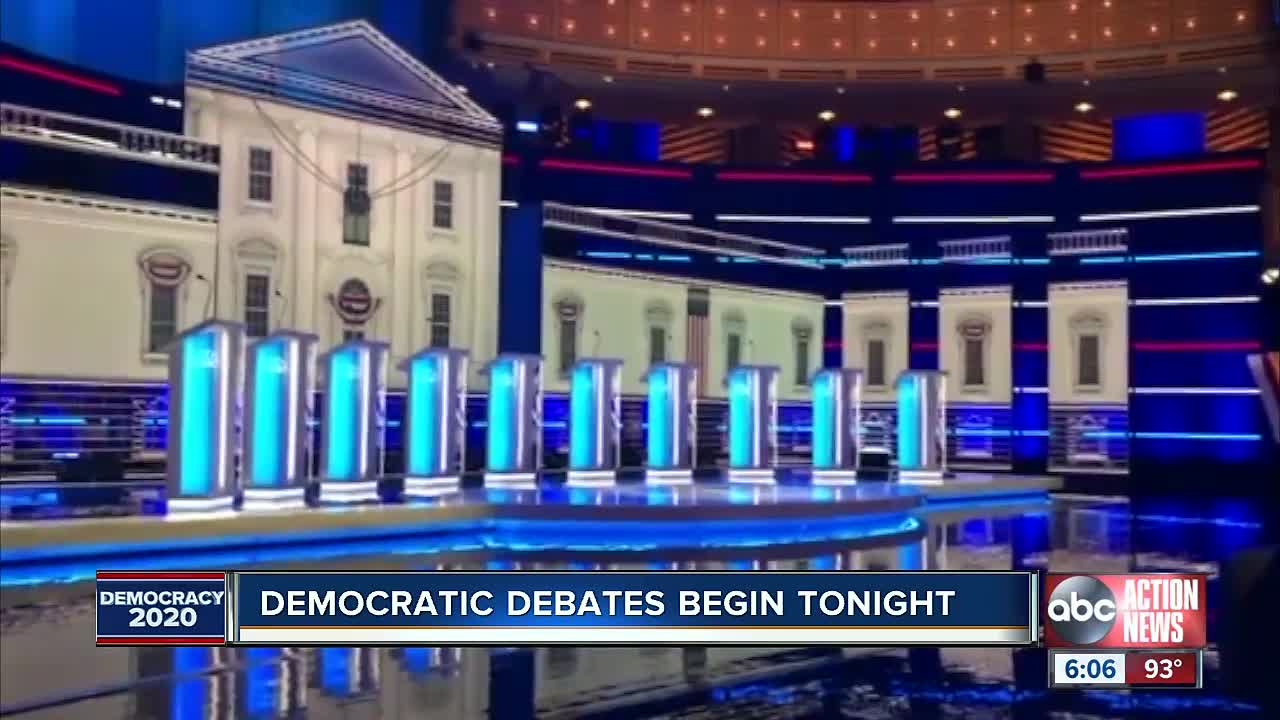 Sixty seconds for answers, a television audience of millions and, for some candidates, a first chance to introduce themselves to voters. 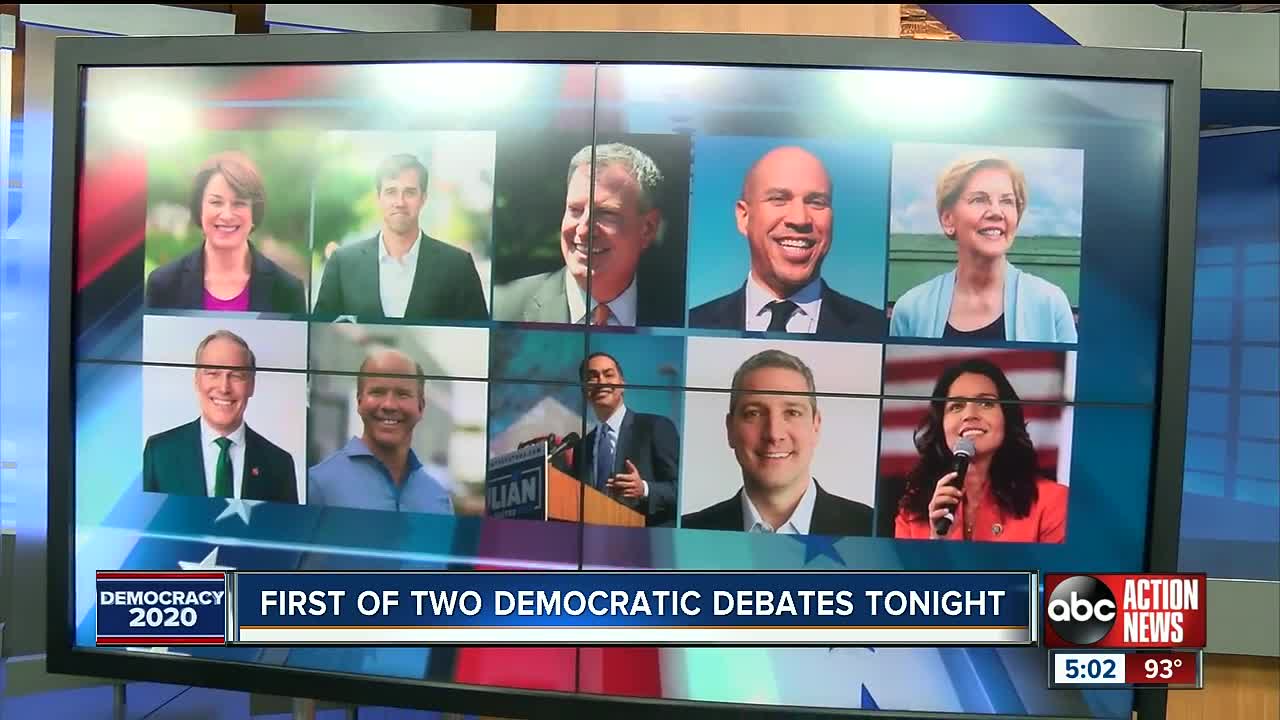 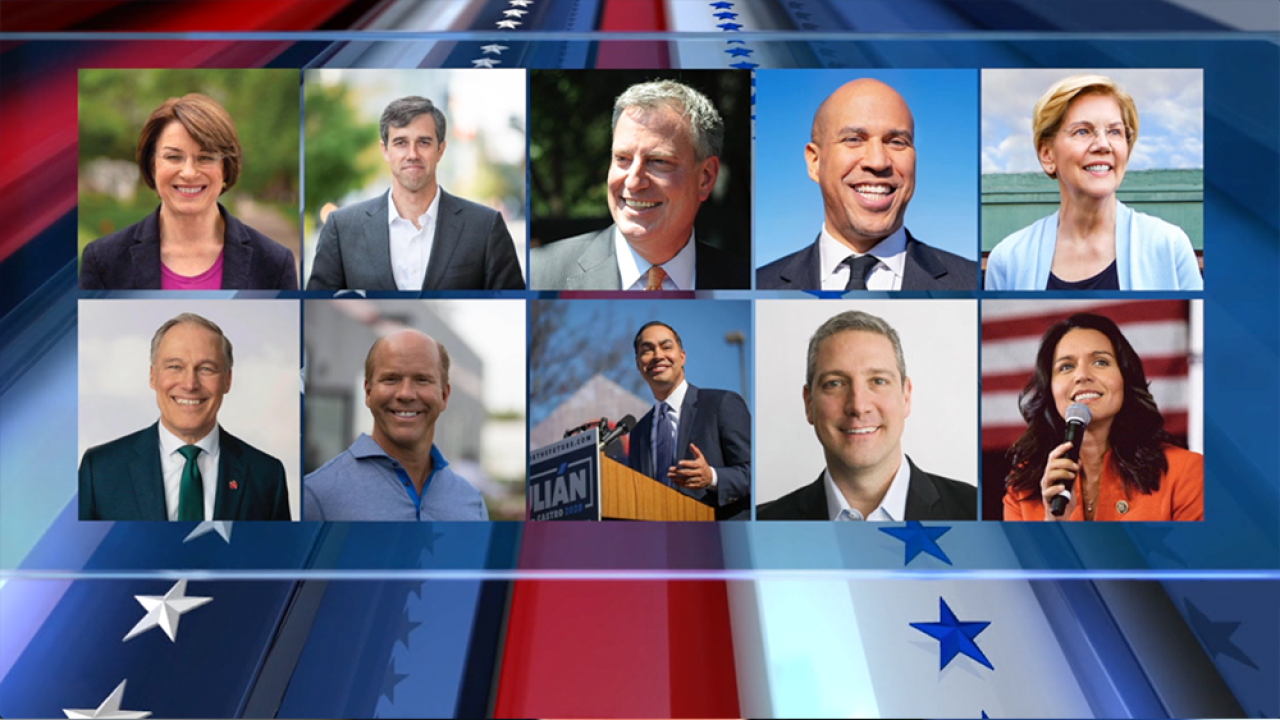 AP — Sixty seconds for answers, a television audience of millions and, for some candidates, a first chance to introduce themselves to voters.

The back-to-back Democratic presidential debates beginning Wednesday are exercises in competitive sound bites featuring 20 candidates hoping to oust President Donald Trump in 2020. The hopefuls range widely in age, sex and backgrounds and include a former vice president, six women and a pair of mayors.

The challenge: Convey their plans for the nation, throw a few elbows and sharpen what's been a blur of a race so far for many Americans.

What to watch Wednesday at 9 p.m. Eastern on NBC, MSNBC and Telemundo:

Ten presidential candidates, led by Sen. Elizabeth Warren, will converge on the debate stage on Wednesday on the first night of Democratic debates to offer their pitches to voters and attempt a breakout moment for their campaigns.

For many of the White House hopefuls, it will be the highest-profile opportunity yet to offer their vision for the country and, if for just two hours, chip into a political news cycle often dominated by President Donald Trump. Given the massive field, the debate will be split over two nights, with 10 other candidates — including former Vice President Joe Biden and Vermont Sen. Bernie Sanders — appearing Thursday.

But on opening night, Warren will take center stage. The Massachusetts senator’s constant stream of policy proposals has helped her campaign gain ground. Strategists say that Warren, widely viewed as a talented debater, is well positioned to showcase her strengths.

“I don’t think anyone else on that night has her level of skill and her level of experience in this format,” said Maria Cardona, a Democratic strategist. “I think she should look at this as an opportunity to really shine and come out of the first night as the one that is dominating the conversation.”

Yet Warren could still face challenges. The other candidates on stage Wednesday aren’t as well known and could use the moment to take aggressive stances against Warren in an effort to find a breakout moment.

“She’s liable to have a target on her back and a lot of people potentially coming after her on that stage,” said Charles Chamberlain, the chairman of the progressive political action committee Democracy for America. “But on the other hand, that will let people see how she handles attacks and can fend them off.”

Asked whether she felt the pressure of effectively being the front-runner during the first debate, Warren shrugged off her center-stage position.

“This is just a chance to be able to talk to people all across this country about how this government works better and better and better for a thinner and thinner slice at the top, and it’s just not working for the rest of America, she told reporters after her Tuesday rally in Miami. “2020′s our chance to change that.”″

Beyond Warren, the candidates who will debate on Wednesday are Sens. Cory Booker of New Jersey and Amy Klobuchar of Minnesota, Reps. Tulsi Gabbard of Hawaii and Tim Ryan of Ohio and former Reps. Beto O’Rourke of Texas and John Delaney of Maryland, along with Washington Gov. Jay Inslee, New York Mayor Bill de Blasio and ex-Obama housing secretary Julián Castro.

One split that could emerge Wednesday centers on “Medicare for All,” the single-payer health plan introduced by Sanders and supported by Warren and others. But some candidates are not fully on board, preferring more incremental reforms. Delaney has been especially vocal in his criticism.

With so many White House hopefuls on stage, it could be difficult to dive too deep on any given issue. NBC News, which is hosting the debate, said candidates will have 60 seconds to answer questions and 30 seconds for follow-ups. They will be allowed closing statements but no openers.

All the candidates are competing ahead of a major fundraising deadline that will have lasting implications. The end of the second fundraising quarter on Sunday gives candidates a chance to make a splash with strong numbers ahead of the mid-July deadline to report that information to the Federal Election Commission.

A strong debate performance could fuel more donations, which is critical to the candidates’ ability to participate in future debates. The Democratic National Committee is enforcing more stringent requirements for participating in the presidential primary debates this fall, so candidates who are struggling to gain a foothold may not have another similar opportunity on a nationally televised stage unless they are able to significantly boost their standing in the polls and fundraising numbers.

“For some of them, this might be their best opportunity to land a blow,” said Joel Payne, a Democratic strategist.

The debate will unfold as many Democratic voters are just beginning to tune in.

“People may have heard (the candidates’) names, but they couldn’t pick them out and don’t know much about them,” said Jesse Ferguson, a veteran Democratic strategist. “None of them are going to seal the deal in the first debate, but they need to get people interested enough to want to learn more.

The debate’s second night on Thursday features more of the leading Democrats in the race. Biden will stand at center stage with Sanders at his left and Mayor Pete Buttigieg of South Bend, Indiana, at his right. The former vice president has come under fire from fellow Democrats after recently recalling that the Senate was once a more civil place, pointing to his work with two segregationist former senators.

Several of the candidates went to Florida early to raise money or court voters in the critical battleground state. Buttigieg held two Florida fundraisers on Monday night and stayed in Florida for debate prep. Warren, meanwhile, was in the state Tuesday to campaign for her new proposal to boost election security.

Not to be outdone, Vice President Mike Pence was also in Miami on Tuesday to launch “Latinos for Trump” as part of an effort to engage Latino voters for 2020. The Trump campaign said it was running ads in Wednesday’s Miami Herald and El Nuevo Herald touting the president’s achievements on behalf of Latinos.