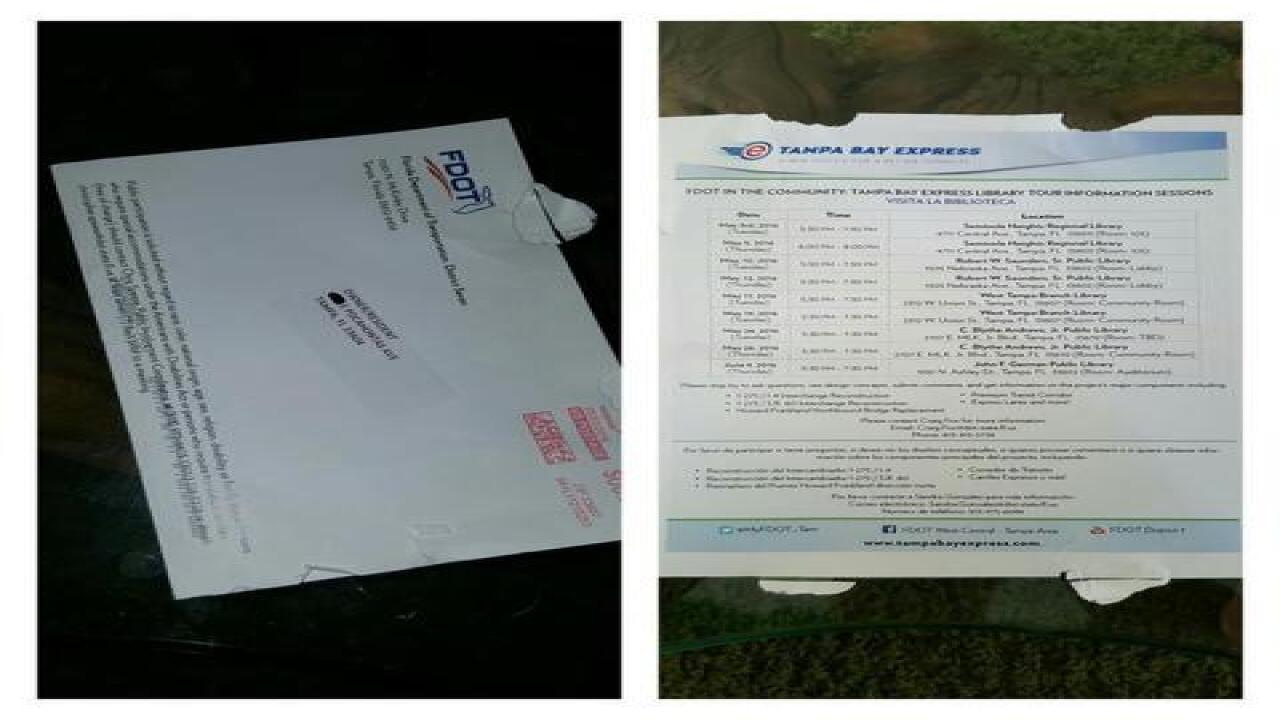 Bonnie Gifford tries to stay open-minded, she says, but a mistake by the Florida Department of Transportation (FDOT) has her questioning the state's motives.

Unlike many in her Seminole Heights neighborhood, Gifford does not have a "no-TBX" sign and she hasn't gone to any protests; the long-time Tampa resident says she just wanted to know more before committing one way or the other about whether she supports a state plan to expand I-275 and add toll lanes.

But a letter from FDOT changed that. It was a letter that came too late.

"I was looking at it thinking that is an outrage," Gifford tells ABC Action News. "Obviously somebody either dropped the ball, but when you think about it they didn’t want us to go to the meetings. They want to say, well, nobody showed up at the meeting."

Gifford is one of many in her community who received a notice about information sessions about the Tampa Bay Express project after the sessions in her neighborhood had already passed by.

The notice to her from FDOT is post-marked on May 3, the date of the first meeting in Seminole Heights. It didn't reach her door until May 6, after the second meeting.

"Obviously if the meeting is not in your neighborhood it's less accessible to you which means you’re going to have less turnout from people from the community," says Darrell Millard, another Seminole Heights resident who says he too received a late notice and now says he's now distrustful of the state agency that's supposed to be informing him.

"Maybe they don’t want to hear what we have to say or they’re trying to quiet the community to a certain extent? I don’t know," Millard tells ABC Action News.

Millard is even accusing FDOT of violating the state's own statues about state agencies and departments giving the public plenty of advance notice of meetings.

Carson also says the state transportation department would never intentionally keep residents in the dark about information, and points out that many did know about the meetings because more than 30 people attended each meeting, and FDOT received calls about the Seminole Heights meetings before they occurred, which she said indicates many residents knew about them.

The FDOT spokesperson says the department may even add another Seminole Heights library session if there is enough interest from the community.

Here is the list of the rest of meetings scheduled for the rest of the month at which people can learn about the tolled express lane plan, known as TBX.

There is also a Community Engagement Office for the Tampa Bay Express project: