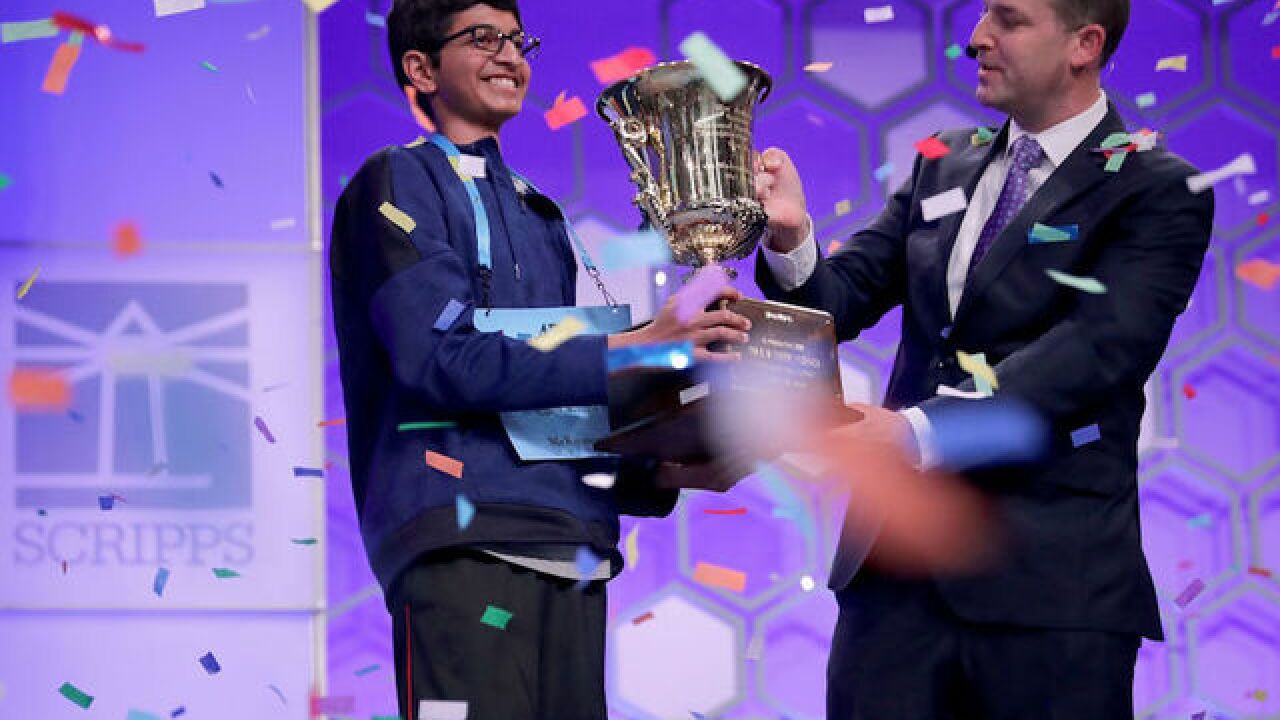 Image copyright 2018 Getty Images. All rights reserved. This material may not be published, broadcast, rewritten, or redistributed.
Chip Somodevilla
<p>Karthik Nemmani (L) poses with the championship trophy and E.W. Scripps Company CEO Adam Symson after Nemmani correctly spelled the word 'koinonia' to win the 91st Scripps National Spelling Bee at the Gaylord National Resort and Convention Center May 31, 2018 in National Harbor, Maryland. Forty-one finalists were selected to participate in the final day after a record 516 spellers were officially invited, up from 291 in 2017. </p>

The Scripps National Spelling Bee is welcoming applicants for its second year of RSVBee, the invitational program that creates more opportunities for champion spellers to compete in the national finals in National Harbor, Maryland.

Last year, more than 230 students competed in the national finals through RSVBee, including the 2018 Champion, Karthik Nemmani, from McKinney, Texas.

To be eligible, students must attend a school that is enrolled in the Scripps National Spelling Bee program and be a school or community spelling champion during the 2018-19 school year. Students who previously competed in the national finals also are eligible to apply. Parents can complete the online application form on behalf of their children between now and March 22, 2019.

There are new application and invitation acceptance guidelines for RSVBee:

“In its first year, RSVBee accomplished what we intended — providing a fair pathway for more students from competitive regions to participate and a first-of-its-kind opportunity for students in unsponsored regions,” said Paige Kimble, executive director of the Scripps National Spelling Bee. “We hope even more families recognize the opportunity RSVBee offers and encourage them to apply.”

Applying does not exclude spellers from participating in any classroom, school, district, local or regional bee events. RSVBee applicants who earn spots in the national finals by winning their regional spelling bee may withdraw their application by contacting the Scripps National Spelling Bee.

Bee Week is May 26 - May 31, 2019, at the Gaylord National Resort and Convention Center in National Harbor, just outside Washington, D.C. ESPN will broadcast the competition on its family of channels.

About the Scripps National Spelling Bee