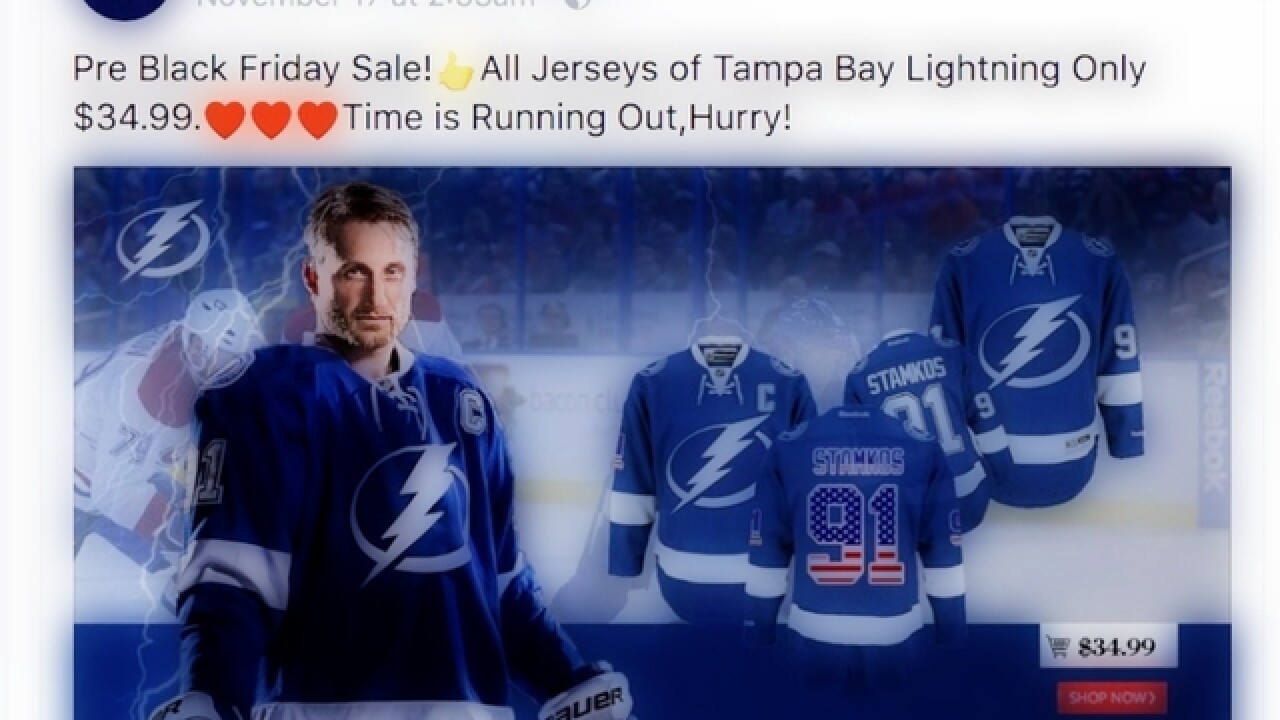 TAMPA, Fla. -- An ad making its way though Facebook feeds claims to be for the "official shop" for the Tampa Bay Lightning. The advertisement is selling deeply discounted jerseys and gear for Black Friday. But officials say don't be fooled.

On the surface the deal seems amazing.

"Real lightning jerseys for $40? Probably not a legitimate deal," said Mitch Neff, a digital media consultant who sees ads like this all the time.

It goes back to that age old saying: what seems to good to be true probably is.

The official Facebook page for the Tampa Bay Lightning has the checkmark noting it has been verified by Facebook. The other page does not. There are other warning signs as well.

"This particular page only has one review which isn’t good and 115 people have liked it," said Neff, pointing out the dubious Facebook page.

If those red flags aren't sticking out, clicking on the link takes you to even more. Poor grammar and misspelled words in the "about us" section. Plus, the only form of contact is a random number at the bottom which goes straight to a generic voicemail if called.

And, the site is not secure. Compare that to Fanatics shop website, an official partner of the NHL, which comes up in green with a lock in the URL bar.

Neff believes they are selling a product.

"You’re probably going to get a jersey but what you’re going to get is not going to be an official licensed NHL product," Neff said.

Matthew Zalkowitz, the Tampa Bay Sports Director of Retails, says they see this all the time.

But he says even if you know what you are buying, putting your credit card information into a site like this is also risky.

"The first thing you notice about them is the color blue," Zalkowitz said, showing the color of a real jersey is very specific.

Zalkowitz notes a knock-off will typically be lighter in color.

"The shoulder patches, the name and number on the back," Zalkowitz said, listing other ways to spot a fake. "We use authentic lettering, the same the equipment managers are using downstairs. It’s an overall quality issue."

They say the NHL, plus all other leagues, have a team working on combating this problem but admit it is hard to keep up. When one shuts down, another opens.

"This is kind of a burn and churn process for these guys," said Neff.

The best thing to do is to report the sites to Facebook or Twitter. Neff also suggests only buying official gear on websites you know and trust, or in store.

Zalkowitz says you can also reach out to them at info@tampabaysports.com if you think there is a site out there claiming to sell "official" merchandise.