Tampa's Police Chief is set to clarify his officers' procedures when stopping bicyclists after a 2015 investigation showed that most bicyclists stopped were black.

TAMPA, Fla. — A new report from the Tampa Police Department shows officers are pulling over bicyclists for three big reasons: One, not having a bike light, two, running a stop sign and three, being on the wrong side of the road. 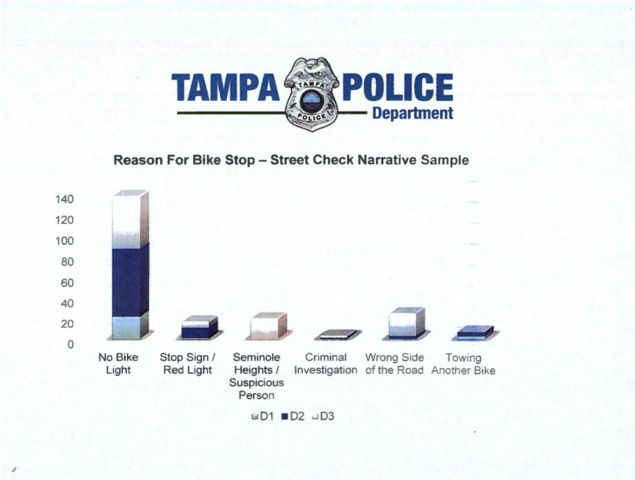 His bicycle is his only way of getting around East Tampa.

"I've been stopped a couple of times and the officer said I didn't have the proper headlights,” said Eddie.

But the $150 ticket he got from a Tampa Police Officer cost him more than his ride.

Bicycle citations or tickets are significantly down in Tampa according to the new report — 33 to date this year, compared to 72 tickets for all of last year.

"I want to know are you targeting the black community because those numbers, I mean, outstanding in every category?” City Council Member Frank Reddick asked Chief Dugan.

The Chief says he encourages officers to give free warnings instead of tickets and defended against the racial profiling allegation adding numbers do not tell the whole story.

"I also wanted to point out some of the disparities when you point out, you know, the DUI arrests in the City of Tampa-- 75 percent are white people. A large number (of DUI arrests) in South Tampa are white people,” said Tampa Police Chief Brian Dugan.

A 2015 Department of Justice investigation scrutinized the police tactic as divisive but stopped short of calling it racially motivated.

Chief Dugan also acknowledged months away from a Mayoral election, he believes political undercurrents are at play.