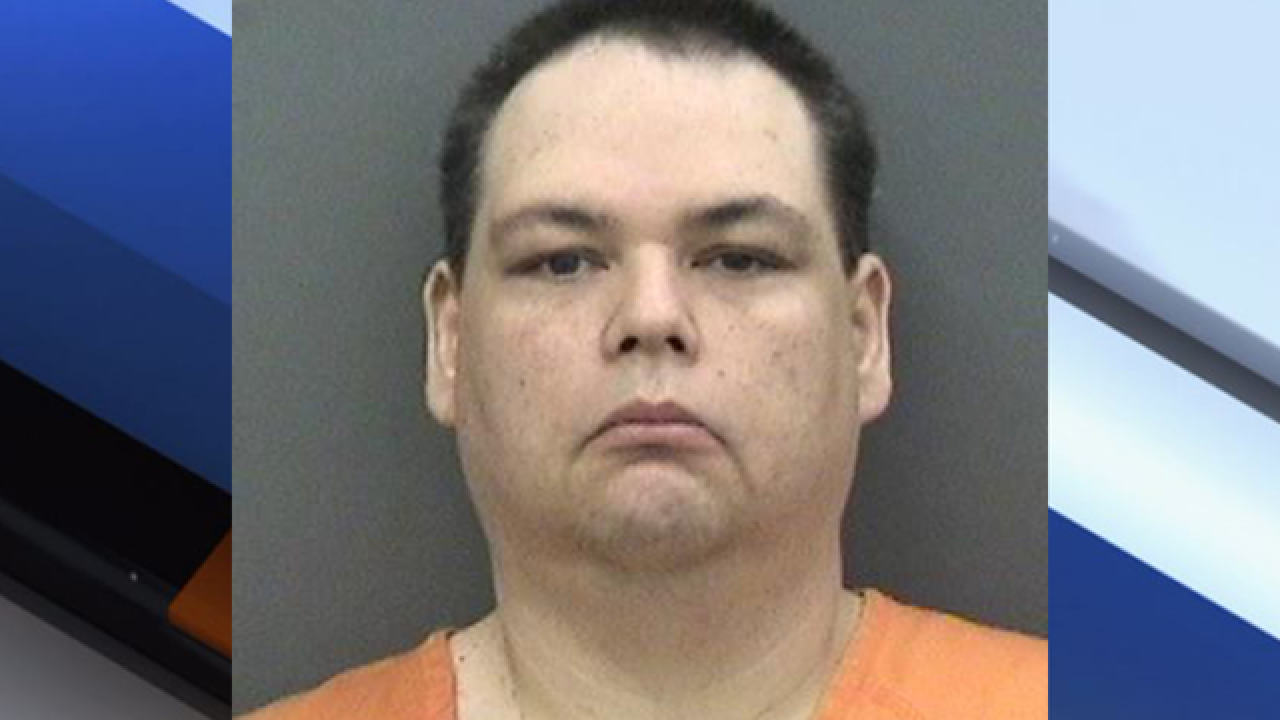 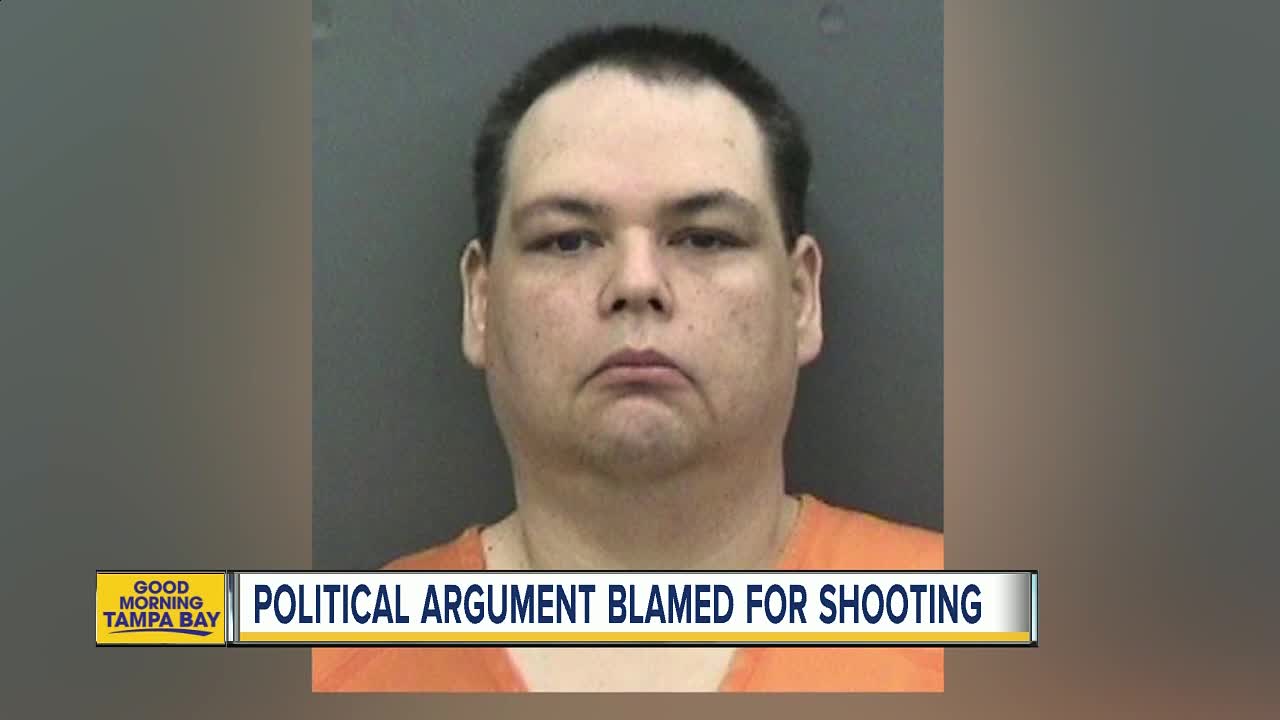 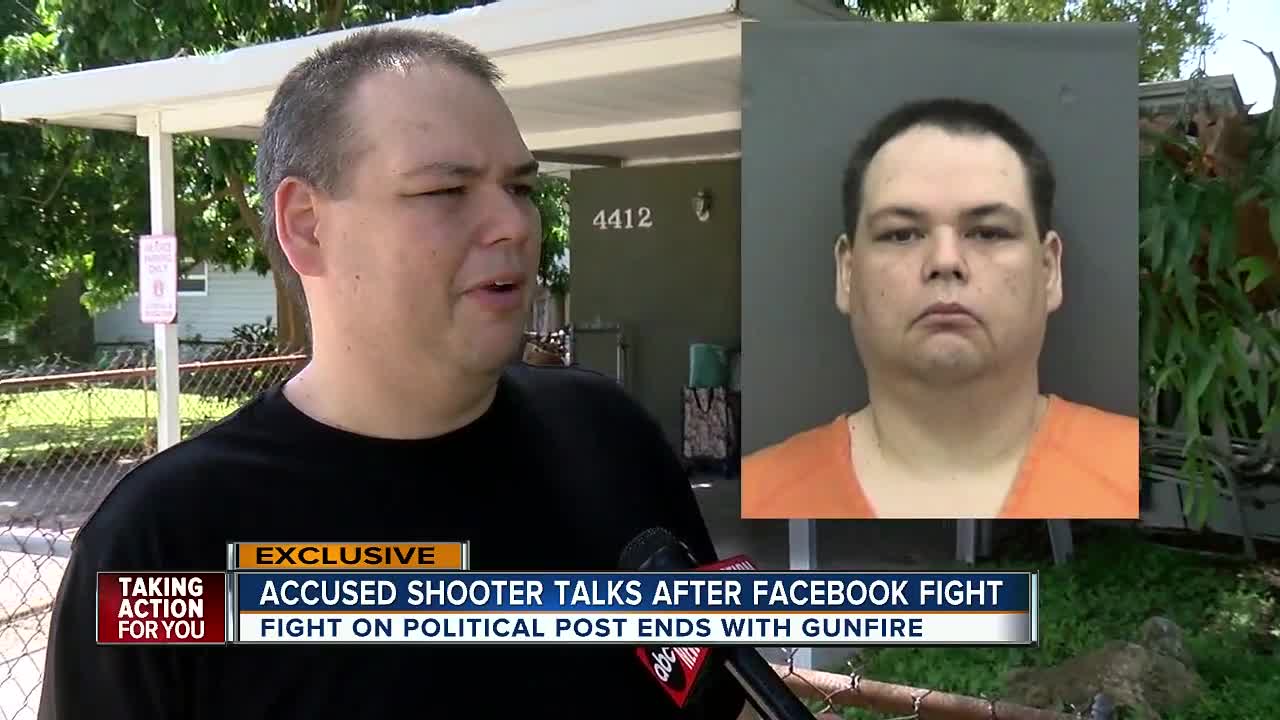 TAMPA, Fla. — A Tampa man claims he was shot after he got into an argument with another man on Facebook on Monday evening.

Alex Stephens, 46, of Tampa, says he and Brian Sebring, 44, of Tampa, became involved in an argument on social media and after receiving several explicit messages and threats, Sebring showed up to Stephens' home to confront him about the messages.

The victim is recovering tonight and the shooter, speaking only with ABC Action News, says all the drama started over politics. Tonight, he's explaining the comments that made him grab his guns.

On Wednesday, Sebring is home from jail out on bond.

"I do regret what I did," cried Sebring.

Speaking exclusively with ABC Action News he recounted the two-day Facebook fight with a complete stranger over politics. On Monday, armed with his AR-15 Carbine and a Glock semi-automatic pistol he drove to the Stephens' home. Sebring says he honked his horn for the man to come out. According to arrest reports, when Stephens came out he charged toward Sebring.

His rounds ultimately hitting Stephens in the thigh and buttocks. Sebring openly admits he did it and says it started after he commented on a post about President Donald Trump. But he claims the political fight with Stephens quickly turned to personal threats.

"He's going to hurt my kids, my mother and I wasn't going to let that happen," said Sebring.

When we asked him to show us those messages he told us the original post was deleted and he could not find the direct messages. We called and knocked on the victim's door but were told no to an interview. Their neighbor Rufino Galvan heard the shooting.

"Absolutely crazy, any fight is crazy but for a political fight, it's even worse. I mean Jesus!" he said.

Sebring says while he was armed he didn't intend to shoot.

"I didn't want to hurt nobody, I'm not a hardcore criminal," he said.

He ended up turning himself into the police. Now he faces two felonies for aggravated battery with a deadly weapon and for carrying a concealed firearm.

"It was stupid, stupid! I ruined my life over this," he said.

Galvan believes all of this could have been prevented.

“The lesson is just to stay home, don’t go out and just keep out of people’s business," said Galvan.