Gasparilla 2022: Everything you need to know about the annual Pirate Fest
NewsTampa

TAMPA, FLA - Tampa Police Officers need help searching for a man who, they said, stole several items from a home.

The crime happened Saturday morning at a home along West Sewaha Street. The homeowner, Ross Glass, and his three children were not there when it happened. When the family returned home that afternoon, Glass said he immediately noticed something was not right.

"I noticed something was wrong because there were some drawers that were open from a little cabinet that we have in the entrance," Glass said.

He immediately checked his surveillance video; it caught a stranger inside his home.

"I was watching it with my children next to me going like 'I see the guy'," Glass said.

Tampa detectives said the stranger stole a few items, which included a laptop, drone, and a gun.

"To know that a bad guy has one of your guns out there, you know, it's just not a good feeling," Glass said.

Glass believes the suspected burglar got into his house through the laundry room. He said his mother accidentally forgot to lock the door when she left out the dog.

"First thing I advise -especially this holiday season- just check your doors before you go to bed," Glass said.

He added people should check their doors before leaving the house too.

"I'm pretty good about it most of the time, but I can't deny sometimes I forget about it," Glass said.

Glass encourages people to get surveillance cameras. He plans to purchase another one. He turned to social media to share the surveillance video so that people could help him identify the man in the video.

He said he is thankful no one was home when the suspected crook rummaged through his belongings.

"The possibility of us coming back to the house, while he was still in here, and maybe a confrontation that is...that is a reality and something I'm grateful that...that's not the way it went down," Glass said.

If anyone has any information about the case, they should call Crime Stoppers of Tampa Bay.

TAMPA, Fla. — A suspect caught on camera entering a home and stealing multiple items, including a gun, is wanted by the Tampa Police Department.

Police say the man entered the home through an unlocked back door on the 2100 block of West Sewaha. He stole a gun, an Apple laptop and a drone before leaving the house on foot.

He was caught on home surveillance inside the house walking around and picking up items. 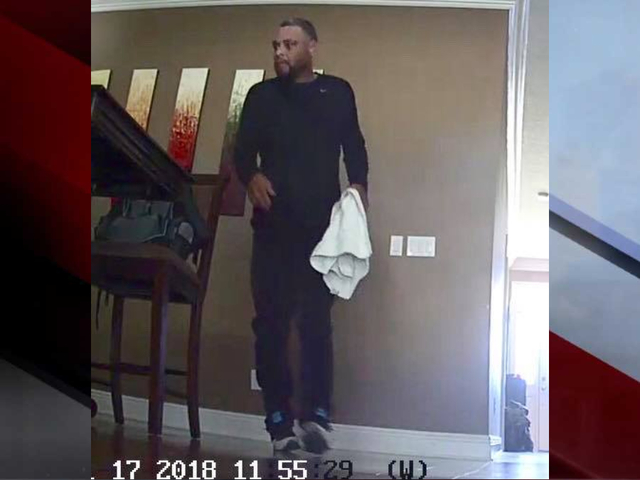 Police are asking anyone with information to call Crime Stoppers at 1-800-873-8477. Information leading to an arrest is eligible for up to a $3,000 cash reward.