Gasparilla 2022: Everything you need to know about the annual Pirate Fest

Changes made to 40th Street in Tampa days after woman hit, killed

Safety changes have been made to a deadly road in Tampa.

City leaders gave 40th Street a facelift just days after a woman was killed while crossing the road.

24-hour flashing beacons have been on 40th Street for many years, but this week city leaders made it a pedestrian activated light instead. That means someone has to press the button for the lights to start.

It may be a small change, but leaders say this should better alert drivers that a pedestrian is crossing the road.

Long-time residents like Terry Bolden said they are scared to cross 40th St especially after 63-year-old Leila Reid was hit and killed while crossing the street last week. The driver cooperated with police and is not facing any charges.

“I’m very worried not just for myself, but for the people in the complex," said Bolden.

Others living at River Pines Apartments say while they think this latest improvement is a good first step but fear it’s not enough.

We saw it happen right in front of us as residents crossed the road. We also put it to the test ourselves and most of the time at least one driver wouldn't stop for the lights. Until a Tampa Police officer caught them in the act and sent them off with a warning.

“They see you crossing the street they won’t slow down for anything," said a frustrated Bolden.

We also found out on just on a mile stretch on 40th there have been five crashes and two killed, including Reid, in the last year. Bolden insists only one thing will help. 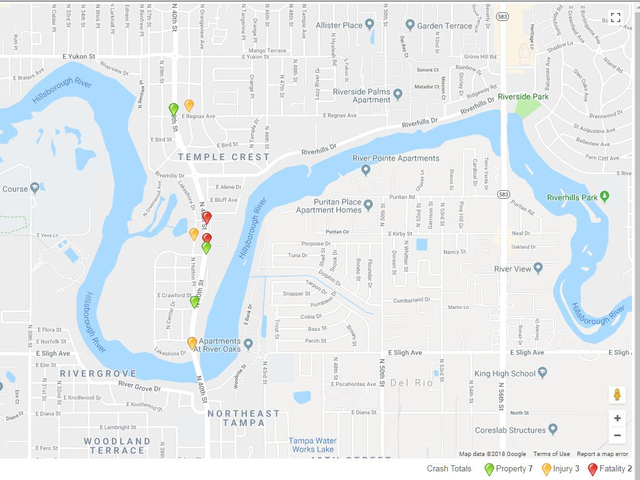 “I think right here we need a stop light. We really do. We need the light not the flashing light," she said.

The pedestrian-activated flashing crosswalks is the first part of major changes coming to the road.

A reduction to the width of the lanes to slow drivers down and lowering the speed limit is expected in the coming months.