Florida’s Department of Transportation is currently working on an intersection that drivers call dangerous because of the stoplights they drive past.

Florida’s Department of Transportation is currently working on an intersection that drivers call dangerous because of the stoplights they drive past.

Drivers have been complaining about South Frontage Road off Gandy Boulevard and 94th Avenue North because of traffic light timing issues that are causing drivers to intersect. 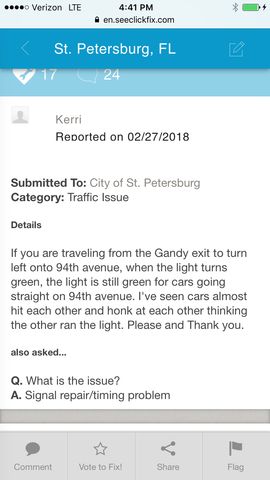 On Wednesday, FDOT had traffic engineers with the city of St. Petersburg out reprogramming the timing on the lights so drivers have enough time to clear the opposite direction of traffic.

The intersection, is hard for most drivers to explain as there are at least six different lights and different lanes to travel, “yah, it’s confusing,” said Sarah Pickett, who drives it every morning.

The newly constructed area is part of FDOT’s way of transforming Gandy Boulevard from I-275 to east of 4th Street North, according to it’s websites blueprints.

As of now, FDOT is looking at stop bars, the timing of the lights and other ways to fix safety concerns.