5,000 kids across Tampa Bay will have presents to open Christmas morning! Monday, the Salvation Army surprised overjoyed parents with gifts.

Just one week before Christmas, Mary Kreyewski’s prayers have been answered. “It’s just a blessing to have help," she said fighting back tears.

In a year unlike any other, she turned to the Salvation Army for help.

“It means the world to me. I have four kids and one on the way. Without it, I don’t know what we would do this year," she explained.

Keyewski's husband lost his job after getting injured in a car crash. She knew she’d have to find a way to explain to her 4 kids why there wouldn’t be gifts under the tree this year. Now, she won’t have to. 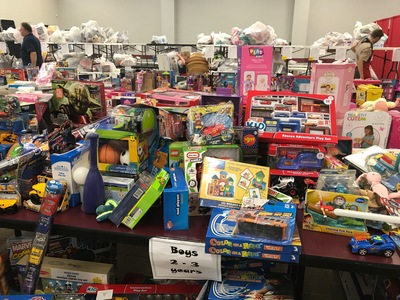 It brings volunteer Tiffany Campbell to tears.  "I've lost count of how many times I’ve had to walk away because I got emotional, but it’s just so humbling and heartwarming.”

Families received bikes, clothes, toys and boxes full of food…but above all, hope.

The Cordani family, who volunteers every year for the event, says it's beyond rewarding."Seeing the looks of the faces of the people receiving these gifts and knowing you're making their holiday a better holiday.”

It has given thousands of families a reason to believe in miracles.