ST PETERSBURG, Fla. — Pinellas County residents are banding together to catch a brazen thief who stole a trailer packed with irrigation equipment.

The thieves nabbed the trailer from a well-lit church parking lot along busy 62nd Avenue North. That’s why the co-owner of Living Water Irrigation company felt comfortable leaving his trailer parked at Suncoast Cathedral Church for the past 3 1/2 years!

“It definitely took me by surprise when I went there and it was not there,” John Farber explained. His trailer with all of his company’s equipment was gone without a trace. “It was everything. It has everything we use on the job so we are starting from scratch."

Farber suspects the thief took the trailer sometime between Friday night and Wednesday evening and even cut through heavy locks on the trailer using bolt cutters.

He immediately posted on Facebook asking people to be on the lookout. Within hours, hundreds of people vouched to help.

“They were saying prayers and sending thoughts. That's meant a lot,” he elaborated.

Farber’s son attends daycare at the church so he worked out a deal to park the trailer in the cathedral’s parking lot and it’s the last place he imagined someone would snatch it.

The bold crime tossed his family owned business into a tailspin.

“We had to pull from everywhere. We had to rent tools, buy tools and borrow tools."

Yet, Friday, they were back on the job at USF St. Pete’s campus working on an irrigation project. 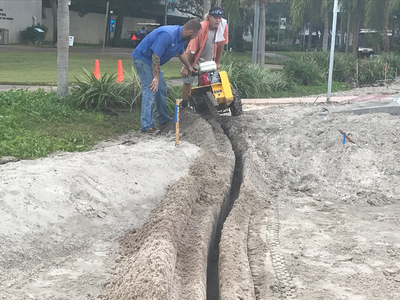 “We will keep going. We pulled from all directions. It was literally yesterday we noticed the trailer was missing and we were supposed to be on the job today."

The thief may have made off with $10,000 in equipment, but the Christmas crook couldn't swindle this single dad’s positive outlook.

“We count our blessings and keep on going,” he said.

With his son Jackson’s support, he’s even mustered the courage to forgive the thief or thieves.

“My son told me ‘daddy, it’ll be okay.’ and to be honest, I wish them (the thieves) the best. If he needed that or they needed it that bad, I’m really sorry for them.” 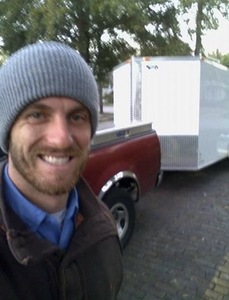 The trailer is white with silver trim. It has a license plate number: 4280PL, though Farber believes the thief may have switched out the plate. The trailer is 12 feet long. The brand is Snapper Trailers. It’s a single axle. It has scratches on both sides on the back of the trailer. The inside has shelving with bins on the left hand side and a pipe rack on the inside right.

Farber filed a police report and hopes if you happen to see the trailer, you’ll call St Pete Police.