Gulfport Police crack down on backyard fireworks for 4th of July

The Gulfport Police Department is issuing a strong warning this 4th of July: If you blast off fireworks, we’ll find you and confiscate them.

GULFPORT, Fla. — The Gulfport Police Department is issuing a strong warning this 4th of July: If you blast off fireworks, we’ll find you and confiscate them.

Police Chief Robert Vincent posted the notice on his Facebook page explaining, "Fireworks are illegal in Florida. Gulfport Officers will be taking a strong, proactive stance in enforcing the use of fireworks. You may be subject to a first degree misdemeanor punishable with up to a year in jail. Fireworks are disturbing and dangerous and it will not be tolerated in Gulfport." 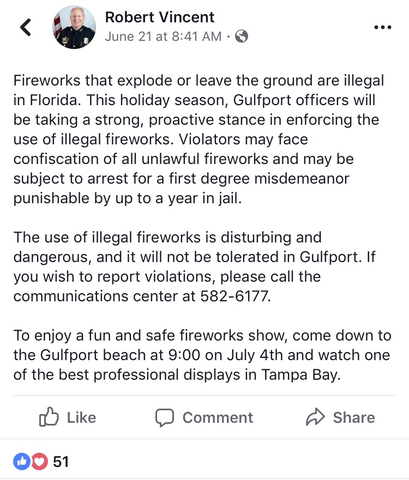 Chief Vincent even encouraged residents to call the police department at 727-582-6177 to report neighbors blasting off illegal fireworks.

Technically, any fireworks that shoot up into the air or explode are illegal, but most police departments tell ABC Action News it’s simply too time-consuming to enforce. Over the past 10 years, Tampa Police have responded to more than 5,200 firework calls. In St. Petersburg, they've responded to more than 4,800. Yet, not a single person has been charged with illegal fireworks.

Often times, officers have to see the fireworks being set off to charge someone. Most times officers tell ABC Action News by telling people to stop, it takes care of the problem.

Chief Vincent says his department won’t be as lenient.

“They're illegal for a reason," he said. "If you have them and you don’t heed the warning, we are going to take them from you. If you continue to do it, you’ll probably get arrested.”

It's disappointing for Malcolm Bond who grew up blasting off fireworks with his family as a child and now continues the tradition with his own children.

“That’s the main reason for this holiday is fireworks. Fireworks, food, and family. You can’t take that away from people," he explained as he picked up several bags of fireworks. Bond lives in St. Pete where fireworks aren't as strictly enforced.

Andrea Harutunian applauds Gulfport for enforcing the law. Backyard fireworks are her least favorite part about 4th of July. “It’s loud! It's very disturbing," she explained.

She also worries about safety after seeing a child get injured with a bottle rocket.

“I saw a rocket go out, come back and hit the kid right in the stomach," she added. "My dad had to rush the boy to the emergency room. That sticks with you."

You might be wondering how your neighbors even buy these illegal fireworks in the first place. The answer: a loophole. Most firework stands have you sign something that says you’ll only use the fireworks to scare off birds from farms.

“When you lie on that form, that’s also against the law. A lot of people breaking the law this time of year,” Chief Vincent explained.