Gulfport flooding fix in the works

Gulfport flooding fix in the works

GULFPORT, Fla. — When Gulfport residents hear rain is in the forecast, they worry! Just one hour of heavy rain can flood streets in the waterfront town, especially during the rainy summer months or hurricane season. The good news is a flooding fix is happening right now!

Construction crews are tearing up portions of Gulfport Boulevard, the main drag through town. The pipes they are adding underground are twice as big as the ones currently being used, which should significantly help take flood water off the street. 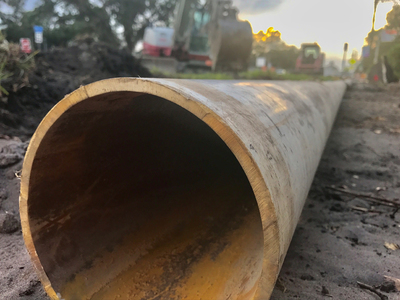 “Sometimes it looks like we have a small pond in front of the salon and you have to rowboat to your business.”

Rain in Gulfport can quickly become a nightmare.

Homeowner Wayne Ekberg has learned that through his two stints living in the waterside town.

It’s not uncommon to see people kayaking down the streets, especially during hurricane season, when the rain comes pounding down.

“It would take heavy rain, but about an hour and the road is like that,” explained David Hastings of Habana Cafe.

Yet, now a solution is in the works. Trucks are in motion building inlets, adding culverts and doubling the size of the pipes that take water off Gulfport Boulevard.

The 1.7 million dollar project will take another 3 months to complete, wrapping up in March, in time for next year’s hurricane season.

“If we do get a tropical storm or hurricane, god forbid, we’ll be in a lot of trouble.”

That’s why they’re looking into other options like cleaning out drainage pipes more often and developing a long-term plan to combat ongoing flooding.