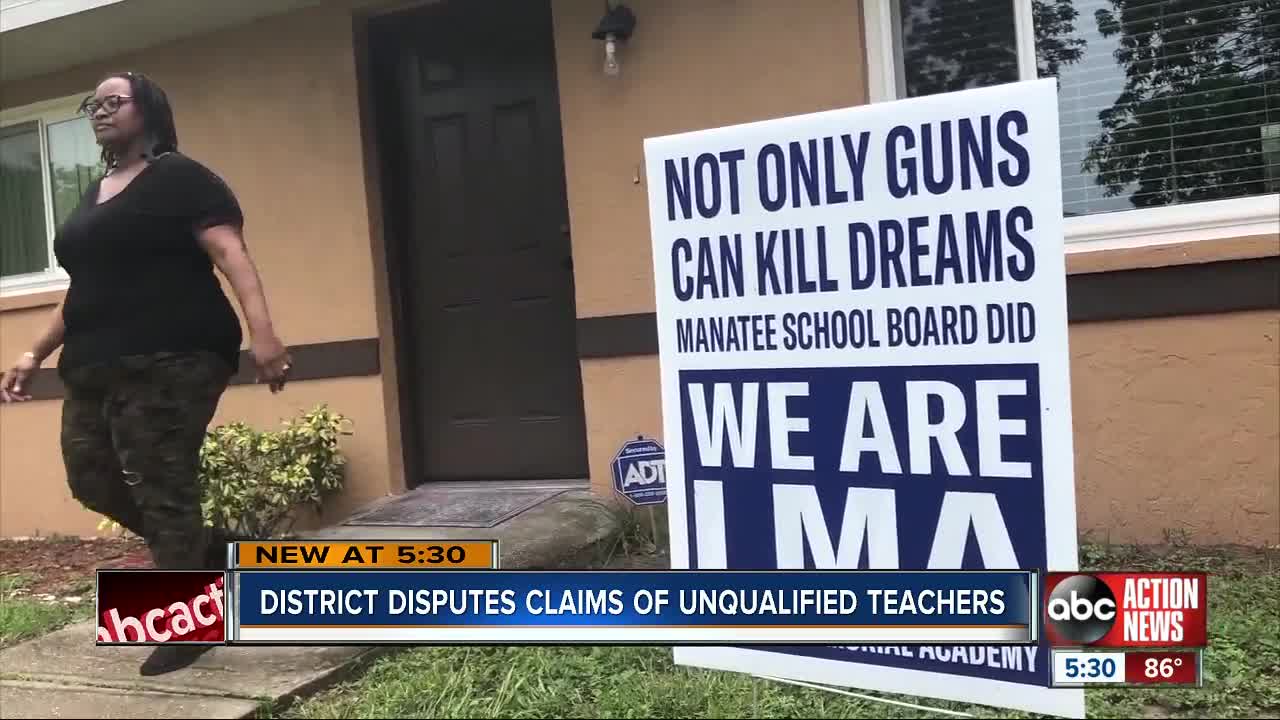 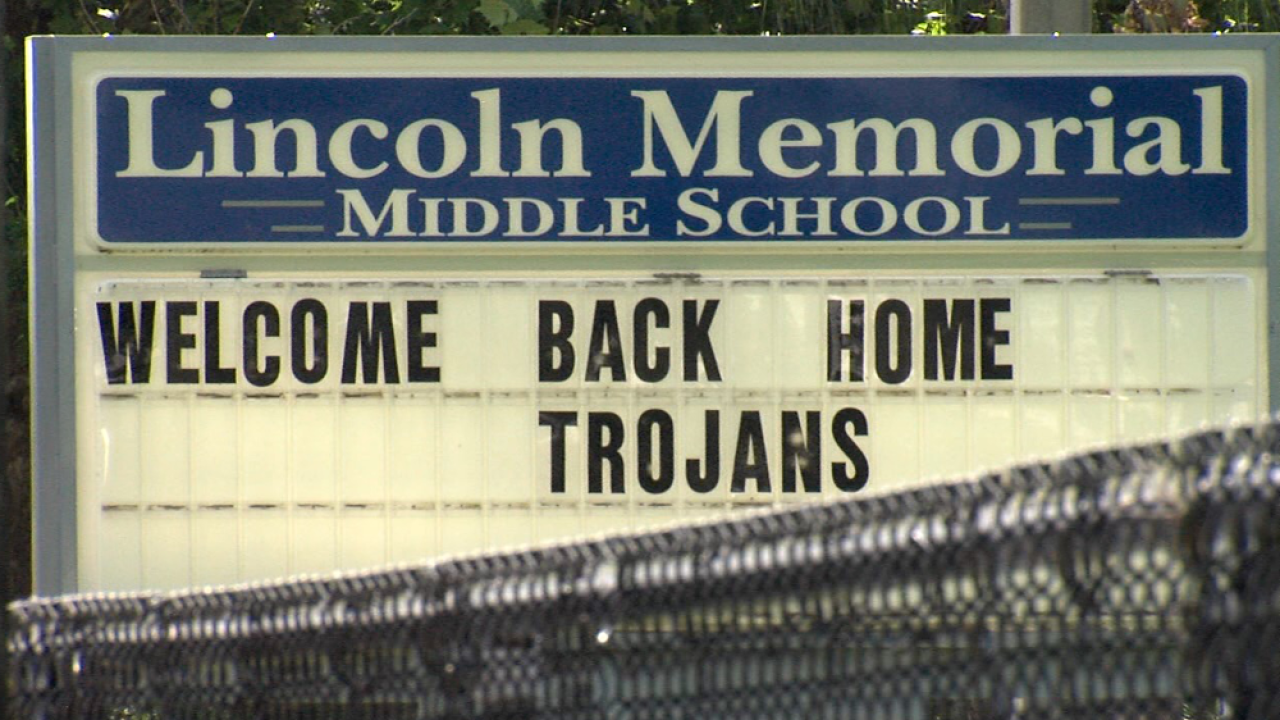 PALMETTO, Fla. — The Manatee County School District is responding to claims made against its management of Lincoln Memorial Academy.

In the lengthy statement at the end of this article, the school district says many claims against it's management of LMA are false.

But Jauana Phillips, the registrar at Lincoln Memorial Academy, says there has been a lot of confusion inside the school since the district took over.

"There has been a lot of miscommunication," said Phillips.

The Manatee County School Board took control of the charter school, Lincoln Memorial Academy in Palmetto last month, saying the school was mismanaged.

Since then, many advocates of the charter school have spoken out, saying the school district is doing a poor job of managing the school.

"It’s been total chaos since the district took over and they took over abruptly," said Phillips.

Phillips says there was confusion over whether students should wear uniforms and a lack of communication to teachers and parents.

There is also a shortage of teachers.

The interim principal at Lincoln Memorial Academy, Ronnie King, sent a letter home to parents on Tuesday explaining the teacher shortage. The letter says in part:

"Unfortunately, we have begun the school year with four teacher vacancies. Over the past two days, your child has had a substitute in the Math 2 class."

The letter goes on to say that the substitute is being supported with lesson plans and teaching techniques from a veteran math teacher of 18 years, as well as administrative staff.

But, it did not address who is filling in for the other vacancies.

C.J. Czaia, an attorney and a member of the Lincoln Memorial Academy board, says staff members who are not certified to teach are being asked to fill in as teachers until the vacant positions are filled.

"People with two-year degrees or less are teaching. The gentleman in charge of transportation is now teaching language arts, this is the kind of thing is unconscionable," said Czaia.

But in the school district’s lengthy response to these claims, they specifically address the former director of transportation mentioned, saying he has not taught or covered any classrooms in the first three days of school, according to school officials.

Czaia claims the district taking over the charter school, that is mostly Hispanic and African American students from low-income families, is about money more than it is about the students.

"The children are what it's supposed to be about. It's about education, it's about empowering young people, and they're lost in the battle here. This is about ego, money, and racism," said Czaia.

No teachers were fired, period. The school’s founder and CEO Eddie Hundley resigned on July 22, 2019, in the wake of The Education Practices Commission’s five-year revocation of his education certificate that barred him from any contact with students. The school’s CFO was released due to an ongoing Federal criminal investigation and the person chosen to replace Mr. Hundley following his resignation was also released prior to the start of this school year. The Master Sheet that was provided to the media yesterday was outdated. Once the School Board of Manatee County assumed control of the school on July 23, 2019, the School District stepped in to make sure the school would be ready for students for the 2019-2020 school year. Along those lines, the District took the following steps:

Once the staffing plan was established, there were four vacancies. It is important to note that three previous teachers at LMA left before the school year started, one to take a job with another charter school, two to take jobs with other schools within the school district. The four teaching vacancies are as follows: · Reading Remediation Teacher – requires a very specialized endorsement, so those teachers can be hard to find. That position is currently posted by the school district. This position is being covered by the schools Reading Paraprofessional until the position is filled. · One Language Arts Teacher – This job has been posted by the District. That position is being temporarily filled withthe school's ESOL Paraprofessional. · Two Math Teachers – Both of those positions have been posted by the District. One of the positions is being filled by a Classroom Substitute, which requires 60 credit hours in college or passing the ParaPro Assessment exam, which is a general aptitude test required in many states for paraprofessional certification and the other is being covered by a Teacher’s Assistant. The Teacher Assistant is a higher-level Paraprofessional paid at a higher rate due to additional responsibilities. · The former Director of Transportation at the school, mentioned in yesterday’s Sarasota Herald Tribune article, has not taught or covered any classrooms in the first three days of school, according to school officials. All of the other teachers at LMA are certified and teaching in their areas of expertise. The rundown is as follows:

The School District provided LMA with three spare school buses recently that had been earmarked for additional high school use such as athletic events. The three buses were inspected by state school bus inspectors and repairs were made to the buses based on those inspections. LMA drivers picked up the buses last week and drove their routes prior to the start of the new school year. They did not report any issues with the buses. The three buses provided to LMA were Bus 561, Bus 562 and Bus 565. According to District Transportation records, Bus 561 completed all of its routes on Monday, Tuesday and the morning route today (Wednesday). It was taken in for service on Monday between routes, but returned for the afternoon run on Monday. Bus 562 completed its morning route on Monday, but was taken in for service following the run for issues with the air braking system. It was replaced by Bus 568 which completed the afternoon route on Monday, as well as both routes on Tuesday and the morning route today. Bus 565 has also completed all routes, including both on Monday and Tuesday, and the morning route this morning.