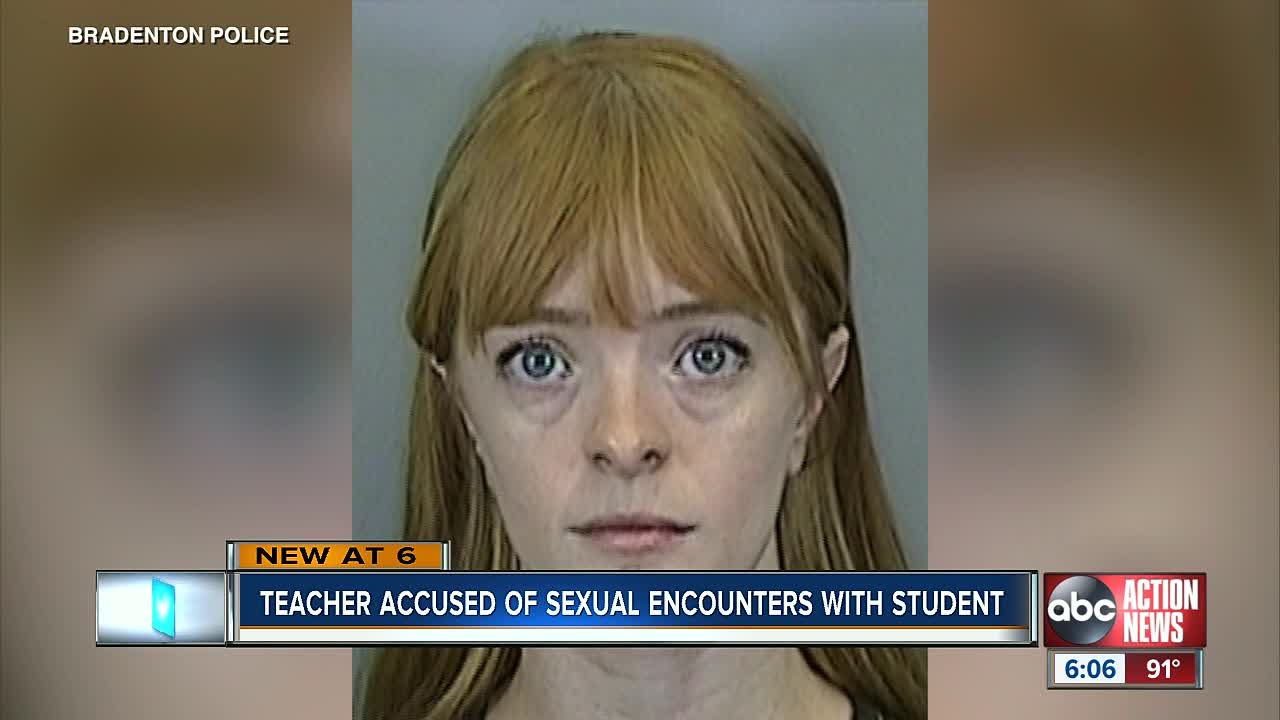 A Bradenton teacher was arrested Monday morning after allegedly having sex with a 15-year-old student. A Bradenton teacher was arrested Monday morning after allegedly having sex multiple times with a 15-year-old male student.

Kassandra Moore, 31, was a teacher at The Broach Private School. She also went by the name Mrs. Kassandra Thomas.

Investigators were provided with a printed copy of text message conversations between Moore and the 15-year-old student, which were "of a flirtatious manner" and sent through Instagram chat.

Officers say the chat originally started over schoolwork, but quickly progressed. The student cooperated with investigators and released several screenshots of "lewd selfie style photographs" Moore had sent him, where she was "wearing lingerie and had her body parts exposed and posed in a sexual manner."

The student then told detectives that he and Moore arranged to meet at G.T. Bray Park on numerous occasions for sex. Some of the sexual encounters occurred in the open just off a trail at the park, according to arrest records. Other times the sexual activity happened inside Moore's car.

The investigation also found that Moore tried to get another teacher at the school to serve as her alibi, and contacted a former student to see if it was possible to delete messages and images from another person’s password locked cell phone.

Moore was charged with four counts of lewd and lascivious battery and one count of transmission of harmful material to a minor.

Bradenton Police say the inappropriate activity happened in March and April, but it took investigators time to gather evidence, including DNA which linked back to Moore.

Captain Brian Thiers says another student learned about the inappropriate activity and alerted school leaders. "I am heartbroken and sad," Thiers said, "This is someone who had no business being involved with children what so ever."

The Broach School put Moore on administrative leave as soon as they heard about the allegations. She was fired, according to police, two days after officers launched an investigation.

Bradenton Police are worried there may be other victims. They are urging students and parents to come forward if they know of any other appropriate activity involving the teacher.

"Right now we have one victim. We'd like to think that's the only victim we have, but we don't know. We often find in these circumstances that you may have other victims afraid to come forward," Thiers explained.

If anyone has any information about this case, Bradenton Police are urging you to contact Detective Michael Page at (941) 932-9314 or michael.page@bradentonpd.com.

Rich Wead, the president of Children's Educational Services, which runs the Broach private schools, released the following statement Monday afternoon:
"Our students and families are our top priority and we are deeply saddened by these allegations. Once we were notified of the allegations, we immediately reported them to the appropriate authorities and the teacher was terminated. All employees of CES are thoroughly vetted and complete a thorough FDLE background screening prior to employment. We take these allegations very seriously and are doing everything we can to facilitate the investigation. Due to the confidentiality nature involving a minor child/student and to maintain the integrity of the ongoing investigation, we are prohibited from further comment."