LAKELAND, Fla. — Despite threats from administrators, students in Lakeland left school Wednesday to join the National Walk Out movement at 10 a.m.

ABC Action News first announced this Wednesday because McKeel Academy also decided to have a fire drill at the exact same time.

Now, our team has discovered a letter that went home to parents, stating they never discouraged students from participating.

Parents have reached out to ABC Action News, who say these are blatant lies straight from the principal.

“It’s like saying the students are making it up, like lying like being kids but they’re not so who do you believe?” A parent, Brittany Ellis says she understands McKeel’s concern for students safety, but she says the school denied the children’s rights to protest.

A student was able to record an announcement school staff made over the intercom stating that students who chose to participate in the walkout would receive detention.

She shared the video with ABC Action News:

A junior at Mckeel Academy in Lakeland FL shared this video with @abcactionnews The principal, overheard on the intercom threatens the students with detention if they participate in the #NationalWalkoutDay event. #ParklandShooting pic.twitter.com/yzPDGpPybx

Both online and in person, parents say they do not necessarily agree with students walking out of class.

They say not all of the kids have the same goal in mind, believing most were trying to skip school for 17 minutes.

So, they see where McKeel Academy may have been coming from.

“They are kids they can’t just do what they want, schools have to control them during the day for their safety,” Ellis added.

Still, some parents say it was the wrong call, to pressure the students into not participating at the 10 a.m. walkout that the entire nation was planning on.

Instead, the letter to parents say the school encouraged kids to honor the Parkland shooting victims, at 8:30 so it would not disrupt school.

A former student, Brett Walters, was waiting in line to pick up his sophomore brother when he told ABC Action News, the fire drill was only a stunt.

“When 10 o’clock came those kids that still plan to do it, they did it. McKeel from what I’ve heard, they also had a fire drill at 10 o’clock,” Walters said.

That fire drill last exactly 17 minutes, either purposefully or coincidentally, the same amount of time the walkout was supposed to last.

When ABC Action News helicopter flew over to gather video from all county schools, it was obvious from the air the students that followed the fire drill, were on one side of the school and the others students who were protesting were on the soccer field with signs.

Also in the letter home to parents, signed by the McKeel Academy principal, it states the school didn’t discourage children from taking part in the walkout. 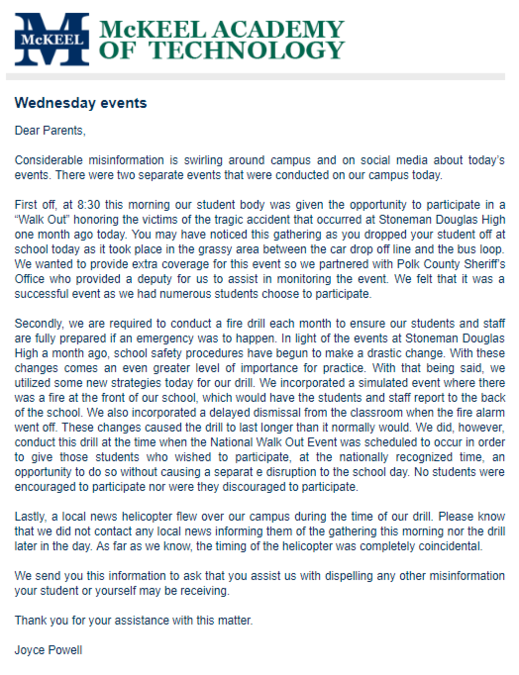 “They are really concerned about their own image instead of letting their students have freedom of speech and letting them speak their own mind,” Walters said.

Other parents say McKeel was just stuck in the middle of a politically charged decision and decided to play it safe.

“I think they were trying to do the best that they could for the situation and still letting them participate in it but not actually participating so I think that was good,” a parent, who wished to be unnamed, said.

ABC Action News confirmed with students today, that they have not received a punishment for the walkout, as of yet.