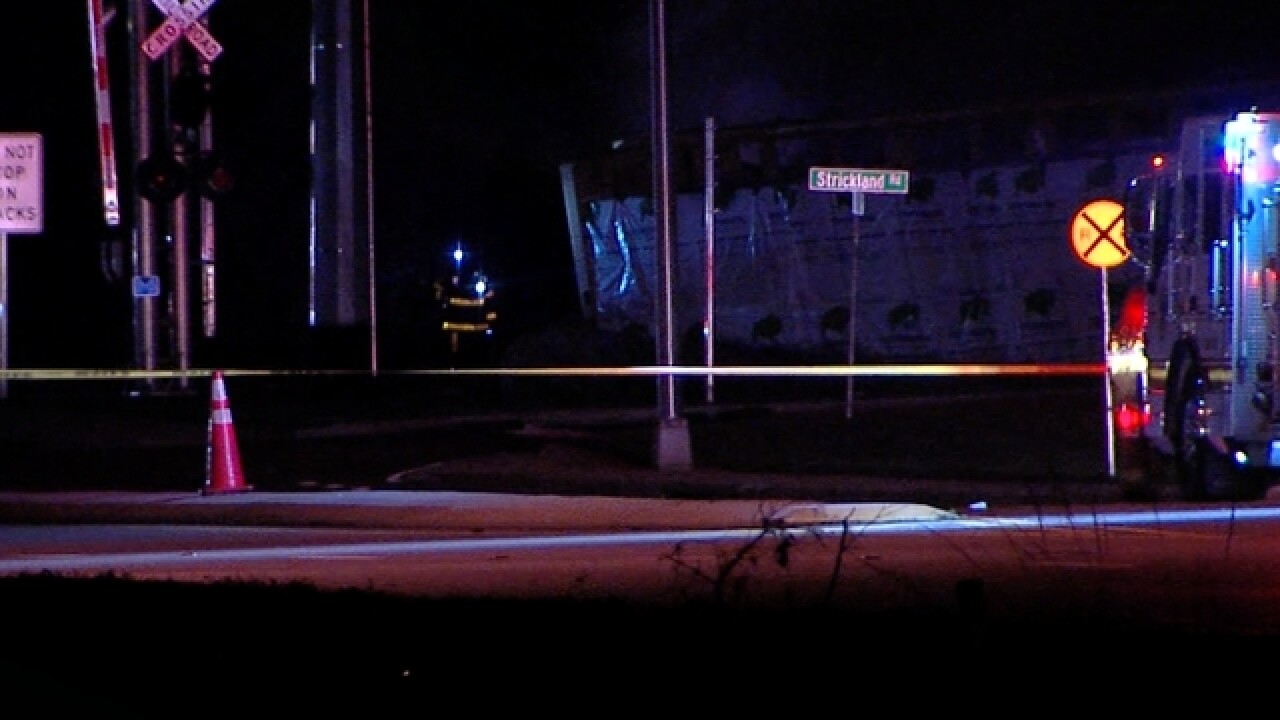 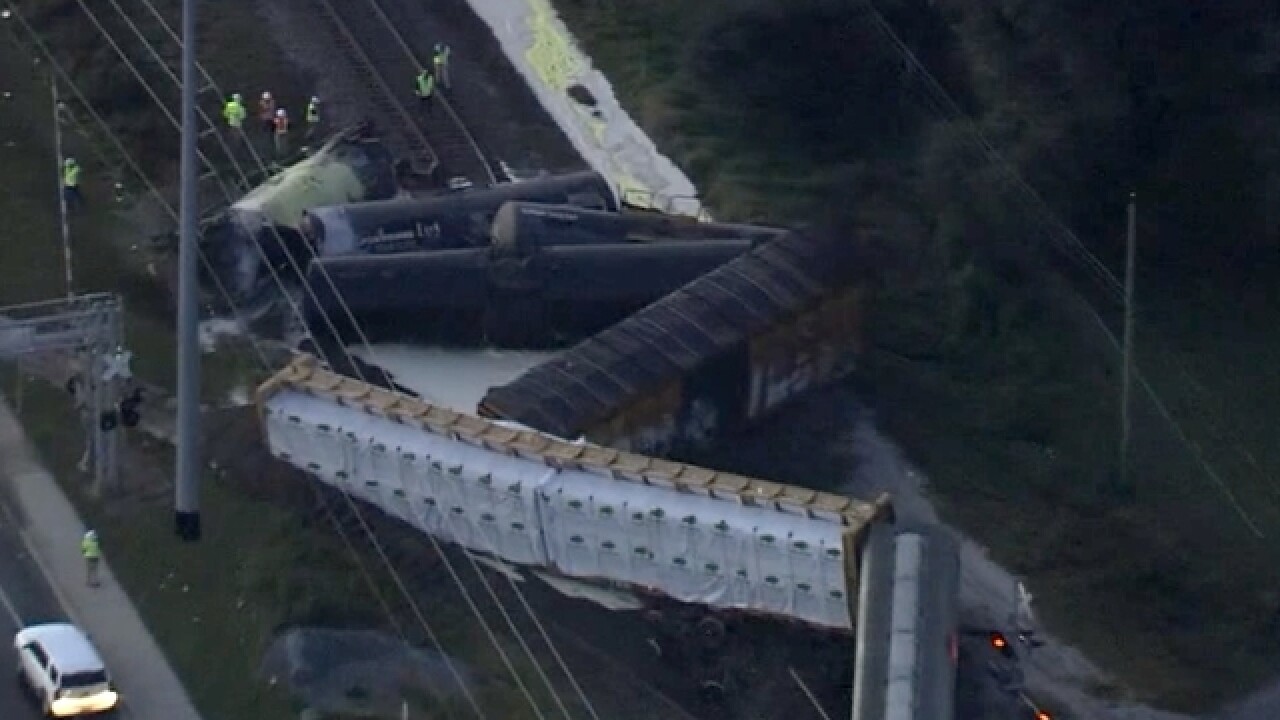 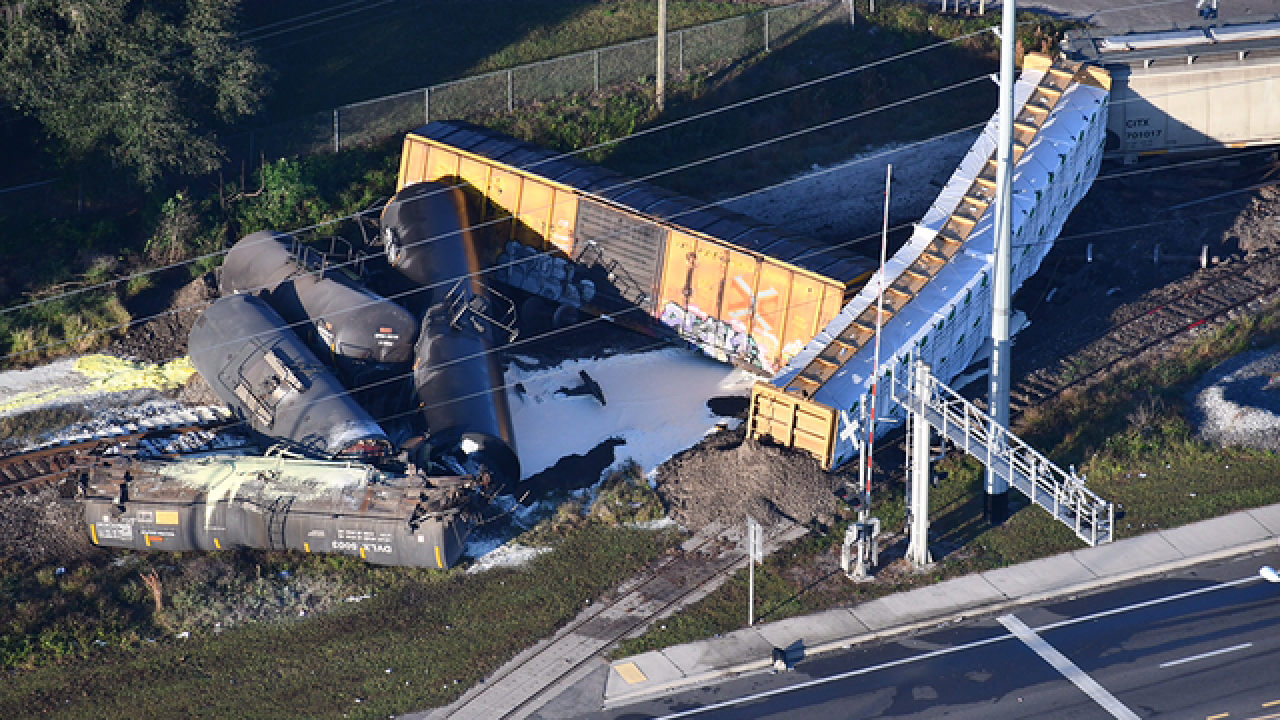 LAKELAND, Fla. -- The Federal Railroad Administration is investigating a train derailment that caused a molten sulfur leak on Monday morning in Lakeland.

BRAND NEW VIDEO: A closer look at the derailed train in #Lakeland - This vantage point coming from a neighbor's backyard looking out at Kathleen Road. This scene is only about a football field from their homes. @abcactionnews pic.twitter.com/2y5hMmQ4OR

The FRA tells ABC Action News that they are investigating the derailment and are currently waiting to receive additional information about the crash from CSX.

CSX crews have made significant progress in Lakeland, Fla., since work got underway early this morning. A full assessment of the incident scene revealed a total of nine rail cars derailed and two of those cars leaked some of their contents. No injuries have been reported.

Several thousand gallons of molten sulphur spilled from one car, and a similar quantity of cooking oil spilled from another car. None of these products impacted any waterways. After developing a remediation plan that was approved by the Florida Department of Environmental Protection, specialists began removing the products from the ground earlier today, and they will continue working through the night until the site is fully restored.

Polk County emergency personnel lifted a ‘shelter in place’ order early this morning after they determined the leaks posed no immediate danger to nearby residents. As a safety precaution, CSX is conducting environmental monitoring throughout the cleanup process. CSX has not detected any impact to the surrounding environment thus far, and CSX does not anticipate any impacts from these products.

Several derailed cars have been safely moved to a staging area across Kathleen Road for later removal from the site. Crews will continue working through the night to clear the remaining derailed cars so track repairs can begin. CSX is also working to establish safe alternate access for residents on Strickland Road, which is blocked by the derailment. CSX representatives have contacted each family living on that street to help with any needs they may have until the derailment site is fully restored.

The train was traveling from Waycross, Ga., to Winston, Fla., when it derailed near Strickland Road at approximately 2 a.m. Monday, November 27. The train consisted of three locomotives, 120 loaded railcars and 72 empty railcars. It was carrying a variety of freight, including molten sulphur, cardboard, oats and rock.

The cause of the derailment remains under investigation. CSX appreciates the patience of our neighbors as we work as quickly as possible to restore this site.

Polk County Fire Rescue responded to the area of Kathleen Road and Strickland Road when passing by firetruck saw several train cars rolled over and mangled around 1:50 a.m.

Officials on the scene told ABC Action News that there was a small fire that was immediately controlled.

According to NASA, molten sulfur can burn your skin if you come into contact with it and make it difficult to breathe. The compound smells like rotten eggs and when exposed to fire, it can turn into poisonous gas.

CSX personnel and contractors have responded to the site to assess the situation and develop a plan to remediate the scene, re-rail the affected cars and restore service.

No injuries have been reported as a result of this incident.

Commuters should expect delays in this area and are advised to seek alternate routes of travel.

Residents along Strickland Road were asked to stay in their homes, close their windows and shut off their air conditioners. The Polk County Sheriff’s office went door-to-door notifying residents on Strickland Road about the shelter in place order.

I spoke with a neighbor who was woken up around 2:40am to this message and automated call from @PolkCoSheriff telling her to stay inside. Smell of sulfur is now noticeably in air. @abcactionnews pic.twitter.com/wTgqNlfMnX

The shelter in place order was lifted by 9 a.m. Monday and officials advised that it was safe for residents to open their windows and go outside. Spectators should stay away from the derailment site.

The train involved in the incident was traveling from Waycross, Georgia, to Winston, Florida and comprised three locomotives, 120 loaded rail cars and 72 empty rail cars. The train was carrying a variety of freight, including molten sulfur, cardboard, oats and rock.

The cause of the derailment is under investigation.