Hannah, the pet Beagle, is back home after eight years away from her original owners.

WINTER HAVEN, Fla. — Hannah, the pet Beagle, is back home after eight years away from her original owners.

Two of those years, Hannah was fighting to survive outdoors.

Upon meeting Hannah, you can tell she’s lead a long life. But just by seeing her, in her lazy, relaxed and almost euphoric state, it’s hard to guess just where she has been.

This Beagle’s tale begins 11 years ago when her owner adopted her from SPCA when she was just one year old. Her owner, was Scott Rodgers’ mother, Jeanie Rodgers.

Only a few years later, Jeanie fell ill with Alzheimer’s and had to move into an assisted living center. While giving up her independence, Jeanie also had to give up her best friend.

The Rodgers family did find a good, second home for Hannah.

Fast forward to last week and Hannah was found on the side of the road, sick looking.

“I saw this dog a couple of weeks ago running down Thornhill and it looked horrible,” Lynn Davidson with Polk County Animal Control did everything in her power to get Hannah back where she belonged.

A microchip led Davidson to a relative of Jeanie, and after a little homework, she found Scott Rodgers and his wife. 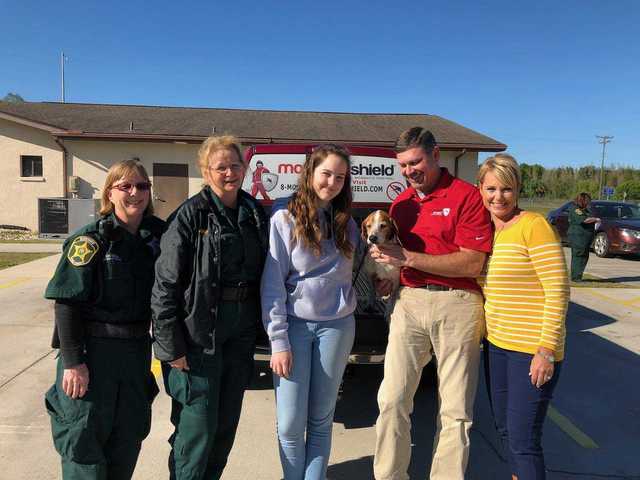 “We got a phone call and that Hannah was at animal control and my first reaction was Hannah who?” Scott Rodgers says he could never forget his mother, but unfortunately, Hannah’s memory had slipped his mind.

“Tammy, of course, her initial reaction she didn’t miss a beat,” Scott Rodgers says his wife immediately remembered Hannah the Beagle and her importance to her mother-in-law.

“I said we need to go pick her up, I said that is your mom sending her to us,” Tammy Rodgers says she believes everything happens for a reason.

They say she had been hit by a car and never returned home. They believed she had died.

When in reality, Hannah was a survivor, battling through the Florida heat, predators and eventually Hurricane Irma.

A surprising journey, and a special one for Scott Rodgers.

“It’s a piece of my mom kind of thing so it’s it’s definitely been emotional,” Rodgers said.

The Rodgers family says they will be keeping Hannah, as she is an older dog now and could not have been adopted because she has contracted heartworm.