PALM HARBOR, Fla. — When Carolyn Burgin saw a bird with something stuck to its beak, she called her neighbor Pat Mead to check it out.

"I saw it from a distance and I thought, 'is that a big fish he’s caught?'" said Burgin. "Then we realized it was a plastic fast food lid."

"A domed lid for those whipped cream drinks. The bird somehow put its beak right through it," said Mead.

The Great Blue Heron was in trouble and couldn't eat or drink.

For days, neighbors in the East Lake Woodlands neighborhood tried to rescue the bird, but when they got close it would fly away.

"She was starving," said Burgin.

Bird rescuer Kim Begay was called in to help.

"Ninety-eight percent of the time a bird in that situation it would die," said Begay, bird rescuer and vice president of the Clearwater Audubon Society.

Begay says thousands of sea birds die each year from getting entangled in litter and fishing lines. Begay and her family have rescued countless birds with rings around their beaks.

But catching birds that can fly is extremely difficult.

Begay says she’s one of a handful of rescuers in the Tampa Bay area who is trained to snare birds. 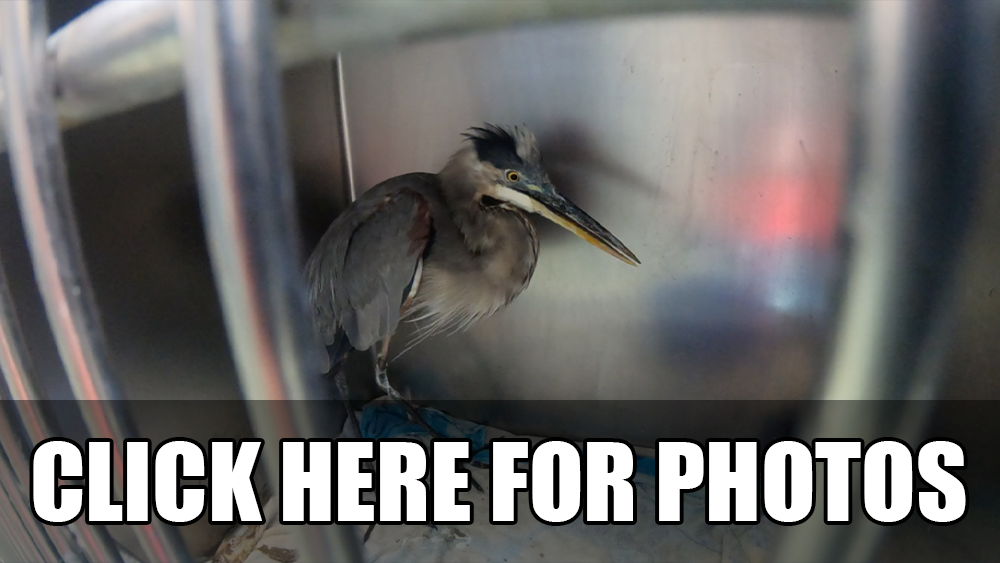 Her prayer was answered. She snared the injured bird and rescued it.

The Great Blue Heron was very malnourished and dehydrated. It was taken to Seaside Seabird Sanctuary and is expected to make a full recovery.

But Begay says the biggest message is to pick up your trash because it could mean life or death to a helpless animal.

"People need to think about the consequences of littering. It might be out of sight out of mind, but it's on a bird’s beak somewhere else. The other thing is to always cut plastic rings," said Begay.

For rescuers who are interested in learning how to rescue birds by snaring, contact Kim Begay at kimbegay@gmail.com