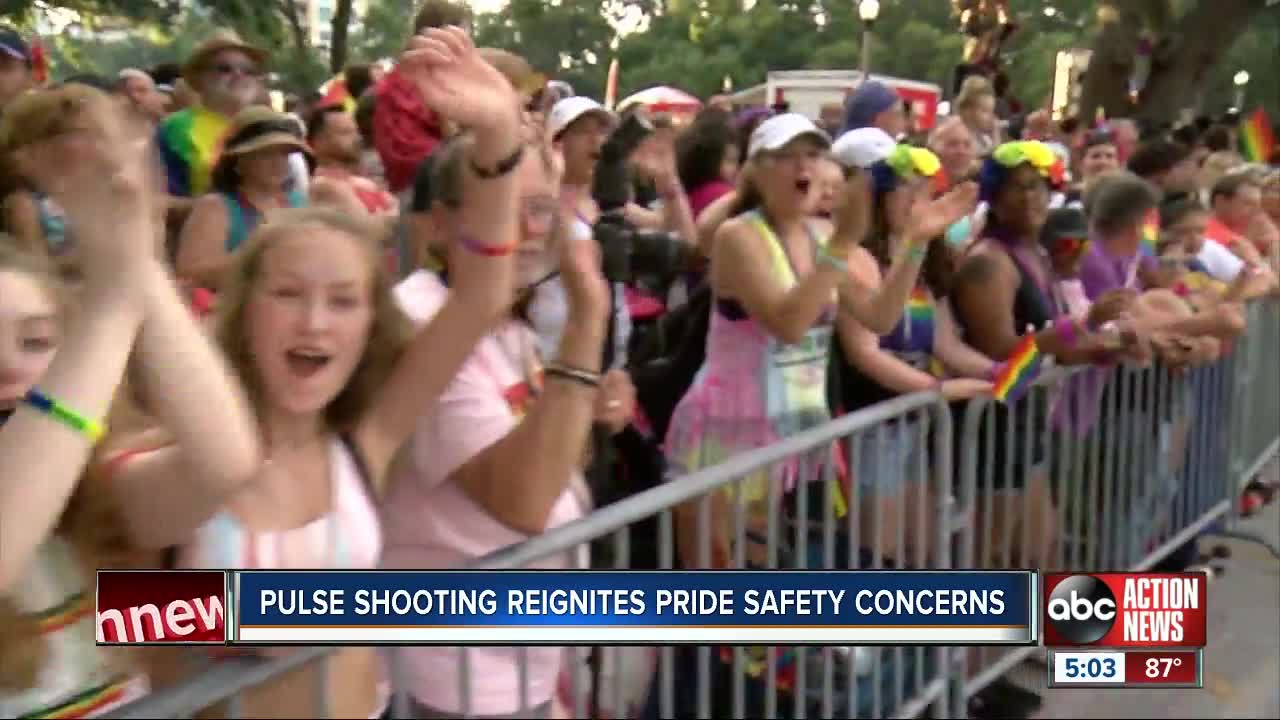 The Pulse Nightclub shooting brings security to the forefront in St. Petersburg, as the city prepares to host one of the largest pride parades in the country in just a week and a half. ST. PETERSBURG, Fla. -- The Allendale United Methodist Church in St. Petersburg joined businesses around the nation paying tribute to the lives lost three years ago Wednesday at the Pulse Nightclub in Orlando.

The church, and 600 others across Florida and the nation, rang 49 bells in unison Wednesday in honor of the 49 victims.

The Pulse Nightclub shooting brings security to the forefront in St. Petersburg, as the city prepares to host one of the largest pride parades in the country in just a week and a half.

Kelly Moore plans to attend the parade and says Pulse and other mass shootings do unfortunately will weigh heavily on her mind.

“When we go out in public, when we go to St. Pete Pride, the movies, the nightclub, when we send our children to school, these are things we have to consider,” she said with a sigh.

Police in St. Pete are not taking those concerns lightly.

“We want people to come and enjoy themselves. Not have to worry about safety. That’s our job,” St. Pete Police spokesperson Yolanda Fernandez explained.

Fernandez says that job entails nearly the entire police staff. Some in uniform and others blending in with the crowd.

Live video cameras will also be rolling along the parade route, and for the first time, officers will be watching those feeds from a command station inside the new police headquarters.

“Before we would either have to do it out of a bus near the site or one year we borrowed the water resources to have our command post out of there,” Fernandez explained.

St. Pete Police also hope you'll be their eyes and ears along the parade route. On June 8th, police in New Orleans arrested 25-year-old Cody Jackson for carrying a loaded assault rifle and a handgun near a pride event in Louisiana. People at the parade helped to alert police.

St. Pete resident David Franks says it makes him conscious of his surroundings. "It makes me think how much we are all still possible targets for those who are not accepting of our lifestyle," Franks explained.

St. Pete Police are also coordinating with the F.B.I. to look for any red flags leading up to the parade, which they say will allowing people to focus on what pride events are really about.

“We don’t let fear keep us from being who we are and celebrating this time together,” Franks said with a smile.

The main event, the St. Pete Pride Parade is Saturday, June 22. The party begins at 2 p.m., with the parade kicking off at 7:15 p.m. along the waterfront on Bayshore Drive.